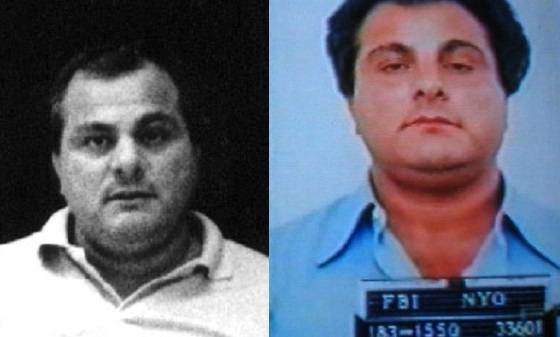 Gene Gotti took a 50-year prison sentence and didn’t flinch. Just like his infamous big brother, John, the Teflon Don, Gene did his time and kept his mouth shut. Now, he faces his toughest challenge yet: Living life as a Gotti.

For a long time, life as a Gotti was simple. Though the Gotti boys had a sense of honor and pride among them, they also had a severe lack of respect for the law. In the 1960s, John and Gene were ferocious truck hijackers, targeting countless trucks transporting lucrative cargo from JFK airport.

The thefts became so frequent that authorities began an investigation. FBI agents kept a close watch on the comings and goings at the airport and one day in 1968 observed the Gotti brothers along with their close friend Angelo Ruggiero loading stolen dresses into a truck. Gene, John, and Angelo were arrested and pleaded guilty to the charges. They were sentenced to several years in Lewisburg federal prison.

Doing time didn’t bother them much. They kept their composure and carried on life on the inside. When they were released from prison in the 1970s, they went back to the streets with another notch on their belt.

Already operating as part of Carmine Fatico’s Ozone Park crew before they were imprisoned, they quickly rose up the ranks of the Mafia. All three were made members of the Gambino family of La Cosa Nostra and became heavily involved in the narcotics trade.

Angelo Ruggiero’s brother Salvatore was a big-time drug trafficker and supplied the crew with heroin and cocaine to distribute down the line. They received several kilos per shipment raking in as much as $2 million dollars over a 6-month period. Authorities knew this because they had bugged Ruggiero’s home and phones.

In the summer of 1983 Ruggiero and Gene and eight other crew members were arrested and charged with heroin trafficking and racketeering. The arrest caused quite a stir since Mafia leaders had explicitly forbidden their members from dealing dope. Anyone caught handling the stuff would face a death sentence. At least, that’s what they were told. In the meantime, the bosses accepted the drug money and looked the other way.

But with Paul Castellano as head of the family, Gene and company had a serious problem. Castellano was a businessman first. He obeyed the rules and didn’t like prison. When he found out one of his crews had been caught dealing drugs he wanted to know everything about it – even requesting the taped conversations. And though he was a businessman-type mob boss, he had no qualms about ordering murders.

So did his brother John. Fed up with Castellano’s treatment of himself and other Gambino mobsters and hungry for power, John set out to seize the throne for himself. He rallied a group of powerful Gambino family captains behind him and planned and executed one of the most notorious Mafia hits in American history when several shooters gunned down Paul Castellano and his underboss Tommy Bilotti in midtown Manhattan on a busy night on December 16, 1985.

After that, Gene was made a capo by his brother and only had the United States government to worry about.

Still, with John Gotti’s newfound notoriety, new possibilities opened up. They tampered with the jury and tried to persuade jurors to make the ‘right’ decision. One even called such a visit by two men “threatening”.

All the help in the world, however, could not mute the wiretaps. Tapes in which Gene and others discuss the dirty business of coke and H. “The guy has already paid,” Gene says on one tape. “We owe him two kilos.”

On May 24, 1989, a jury found Gene guilty of trafficking heroin worth’ multiple millions. He was sentenced to 50 years in prison.

If a sentence can be condensed into two days, the day he entered his cell and the day he stepped out a free man, then Gene Gotti faced a mindboggling change of reality.

Released from the Federal Correctional Institution in Pollock, Louisiana on September 14, 2018, Gene stepped out in a world that lacked his big brother John, who passed away in 2002. Though he’s not present in a physical manner, his spirit and legacy still weigh heavily on the world he left behind.

The motion picture Gotti, starring John Travolta as the Teflon Don, is in cinemas around the globe and John Gotti’s face continues to be plastered on the front pages of magazines and newspapers. What started out as infamy has become fame. Something the mob has no use for.

Nor does Gene, one suspects.

His release from prison is big news. The New York Post even lay in wait for the 71-year-old Mafia captain when it managed to snap an exclusive photo of him outside his family home in Valley Stream, Long Island.

So what now? The Gambino crime family is currently being run by Sicilian Mafiosi with extensive ties in the international drug trade. A man like Gene Gotti would fit in perfectly. Add to that the fact that he is a staunch practitioner of omerta, the code of silence, and it seems highly unlikely that the Gambinos don’t have a spot reserved for their long-lost brother.

Then again, he’s a Gotti. A name that rings louder than Al Capone nowadays. Why take on all that attention and heat?

Besides, all that is considering Gene even wants back in. Maybe he’s had enough of the life after serving 29 years locked up in a cell watching his older brother rot away from cancer doing a life sentence. Knowing that his brother Peter will be behind bars until 2032. A year he will unlikely live to see.

No, perhaps Gene will follow in the footsteps of his nephew John A. Gotti “Junior”: Go legit and live off the Gotti name in ways that don’t break the law. Time will tell.