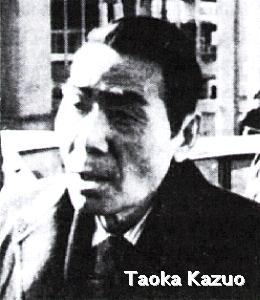 Taoka was born in 1913 in Kobe, Japan. His parents could not take care of him and so at an early age he became an orphan. To make money Taoka began working on the docks of Kobe and pretty soon turned to a life of crime to survive. He joined a gang under the leadership of Noburu Yamaguchi. Taoka proved he was fit for a life of crime when he fought in street fights. One of his special moves was to claw his opponents eyes with his fingers, this move gave him his nickname: 'Kuma' or in English 'Bear'. In 1936 at the age of 23 Taoka was sentenced to 8 years in prison for killing a rival Yakuza member. He was released from prison in 1943 and rejoined his palls in the Yamaguchi Gumi clan. In 1946 his Boss Noburu Yamaguchi died and at the age of 33 he took over as the new Oyabun (Boss) of the Yamaguchi Gumi who at that time were decimated, by arrests and milititary draft, to an estimate 25 kobun (made guys, soldiers). But under Taoka things would get better....a lot better.

Taoka turned out to be an amazing Oyabun. Thanks to his organzational skills the Yamaguchi Gumi's membership soon increased and they became strong enough to challenge other groups in the area. First to succumb to the Yamaguchi Gumi's powers were the Honda Kai group, they were a major gambling group in Kobe and were taken over by the Yamaguchi Gumi. Next up were the Meiyu Kai from Osaka, they also were defeated and this gave the Yamaguchi Gumi a major share in the Osaka rackets. Taoka wasn't satisfied yet and ordered his soldiers to take on the Miyamoto Gumi, they were threatened and under threat they decided it was better to join the Yamaguchi Gumi Clan, and so the Yamaguchi Gumi had new members and grew even more powerful. Taoka then wanted to move in on Yokohama but this move didn't go through after talks with major Yakuza Oyabun Kodama. Kodama was one of the most respected Yakuza Oyabuns of Japan and brokered a pact between the Yamaguchi Gumi and Tokyo's powerful Inagawa Kai Clan. This alliance created a Yakuza monopoly with only 4 of Japan's prefectures free of their control.

By 1978 at the age of 65 Taoka was living the life. He had the power and the money and could sit back and enjoy. But it's at those kind of times that trouble is around the corner. In July 1978 Taoka was relaxing in a Kyoto Kyoto nightclub. He was as always surrouned by his bodyguards, but that didn't stop a young man from walking up to Taoka and shooting him with a .38 caliber gun. Eventhough there were bodyguards all around Taoka the young man managed to escape leaving Taoka wouned with a gunshot in the neck. Taoka was rushed to a hospital and survived. He found out that the young man who shot him was part of the Matsuda Clan. The Oyabun of the Matsuda Clan had been whacked by the Yamaguchi Gumi and several of the Matsuda Clan's members had vowed to take revenge. This young man tried, failed and was found dead several weeks later in the woods near Kobe.

Taoka recovered from his wounds and went on to control his criminal empire. These were the glory days for the Yakuza. Within 2 decades things would change for the worse just like it would for their Italian counterparts in the United States. But this was not on Taoka's mind, he was still living like an emperor and enjoying his power and wealth. In 1981 Kazuo Taoka died of a heart attack. His funeral was a big affair attended by high ranking Yamaguchi Gumi members from all over Japan as well as a number of well known celebrity entertainers. After his death the Yamaguchi Gumi Clan had some trouble with getting back to normal. During the customary 3 month mourning period police took advantage and arrested 900 Yamaguchi Gumi members in the hope of turning some of them informer and maybe breaking the Clan. Taoka's had chosen his successor before he died but at the time he was in prison and could not lead the Clan and so Taoka's widow decided to become Oyabun for the time being to prevent an internal war. She didn't make any major decissions but maintained peace untill a permanent new Oyabun was selected.