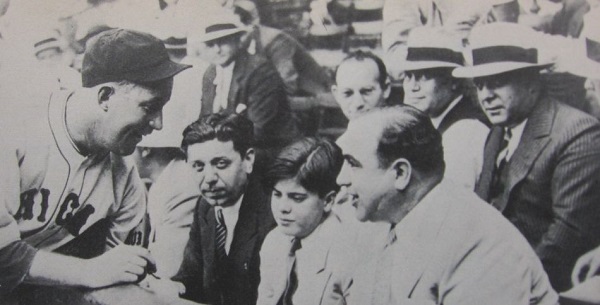 The Chicago Cubs did it! They’ve become World Series champions again after a 108-year drought – the longest in baseball - defeating the Cleveland Indians in Game 7 in Cleveland. One notorious fan would’ve been extremely happy with the win, if he had been alive today that is. Who? Alphonse “Scarface” Capone.

Major League Baseball is a huge sport, attracting millions of television viewers and packing stadiums full with fans. The Chicago Cubs are no different. Despite not having won a World Series since 1908, its loyal supporters still showed up every season.

Even on September 9th 1931, at Comiskey park, when the Cubs played its city rivals, the Chicago White Sox. At that point, the team had been without a World Series win for 23 years. A pretty long time. Still, fans came to see their favorite athletes.

The most infamous figure sitting front row that day, was none other than Chicago crime boss Al Capone. (See photo above.) According to the Al Capone Museum website, “It was a game to raise funds for charity. The Cubs won 3-0.”

On the photo, you can see Al Capone with his son Albert Francis Capone getting an autograph from Cubs player Charles Leo “Gabby” Hartnett. This photo caused him quite some trouble after it was published in newspapers throughout the country. Higher-ups instructed him not to have his picture taken with Capone ever again. “Gabby” wasn’t impressed and replied, via telegram, writing: “OK, but if you don't want me to have my picture taken with Al Capone, you tell him.” 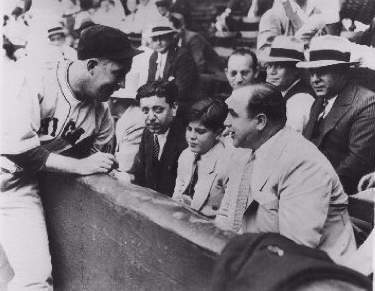 Above Capone and son on the right side, you can see his bodyguard Fred Pacelli also known as Frank “Cowboy” Di Giovanni. Another bodyguard-hitman also seated just outside this photo, sitting on the right of Pacelli, was Vincent Gibaldi better known as “Machine Gun” Jack McGurn. Next to Capone’s son is Illinois legislator Roland V. Libonati, a World War I veteran and good friend of Capone.

It’s a photo filled with historic stories about a long-gone gangland era.

After their first win in 108 years, current Chicago Cubs team president Theo Epstein brought up the club’s history, paying respect to everyone involved with the team. “Our fans just deserve it so much, and all the former Cubs, everyone, this is for so many people -- (the late) Ernie Banks, (the late) Ron Santo, Billy Williams. ... We're bringing the trophy home to you guys. It's been a century in the making.”