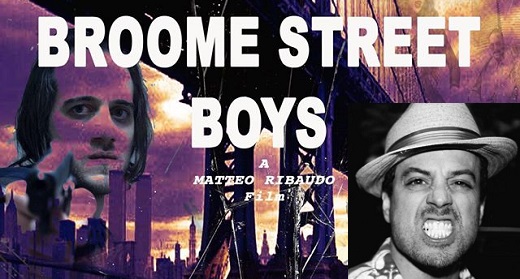 The gangster movie genre owes a lot to Italian-American directors like Martin Scorsese and Francis Ford Coppolla. Soon we can add Matteo Ribaudo to that list. His words. Shoot for the moon and you might just hit a star. That’s his motto. With his new film Broome Street Boys this fresh director plans to make his mark and entertain audiences with a good ol’ gritty gangster flick. But first, the movie needs your help!

As soon as Matteo sits down for his interview with Gangsters Inc. we are struck by his open and candid posture. Despite living in Los Angeles surrounded by Hollywood movers and shakers, hustlers and breakers, for several years now, he has kept his New York attitude. He is direct, funny, and in your face. Above all, he is driven and enthusiastic.

His parents, he says, played a big part in that. “My parents got married, had three kids, and had to do whatever workwise to take care of us. I want to succeed so they see all this hard work wasn’t for nothing. It was for a lot.”

He didn’t always make it easy on his parents. He went to three different colleges, the last one for sports medicine, but was mostly focused on acting. “I was taking film and acting classes and eventually landed an internship with an acting group in Los Angeles.”

He stayed with the group after his internship was finished. One of the acting coaches there, who was also from New York, told Matteo he had a real director’s type of mind. The way he critiqued other actors and saw acting. After that, something clicked in Matteo’s mind. Next, he wrote and starred in a short film titled In the Name of My Father which screened at the Cannes Film Festival. It led him on a journey which saw him put all his focus on writing and directing. At Gangsters Inc. we can’t get enough of gangster movies. We love them all. From classics like The Godfather and Goodfellas to more recent gems like Layer Cake and The Prophet. So we were very eager to have a chat with Matteo (photo right), who is currently shooting Broome Street Boys, weaving facts with fiction the film is about the last heist of French Connection heroin from the Broome street precinct, two brothers, the Mafia, and more.

It will be a movie in the line of classics like Serpico, Mean Streets, and, of course, The French Connection, films shot on the cold hard streets of New York featuring characters who will eat you up and spit you back out. “I wanted to bring a gritty crime story,” Matteo tells Gangsters Inc. “A movie for people who like Carlito’s Way. It’s not that old but they don’t make those movies anymore. People in the industry quickly go ‘Oh, that’s been done before.’ Yeah, but I put my creative spin on it, making it different,” he says passionately. “The actors do that as well, the cinematographer does, everything is different because we’re different.”

When Matteo began doing research while writing the screenplay for Broome Street Boys he came across a piece on Gangsters Inc. written by Thom L. Jones about The French Connection. “I was like ‘Oh my God! This is awesome! His information was really great to read because of the nuances, the red flour beetles [which popped up in the bags that should’ve contained heroin from the French Connection], and then the fiction side of my brain kicked in and I thought why not a story about the last heist that went wrong on Broome Street?”

He then began the process of mixing fiction with non-fiction, weaving facts with fantasy and using real life characters as inspiration for the characters in the movie. The plot centers around two brothers, Alec and Eddie, one a hoodlum the other a cop. Alec, played by Jeff Staron (In Time), manages to steal 42 kilos of French Connection heroin from the NYPD precinct on Broom Street. His brother Eddie, played by Ed Trucco (Highlander 2, Maria Full of Grace), is there to arrest him, but the heroin disappears. The movie picks up again when Alec is released from prison ten years later. From that moment the audience is taken on a violent rollercoaster ride filled with mobsters, pimps, and corrupt cops. 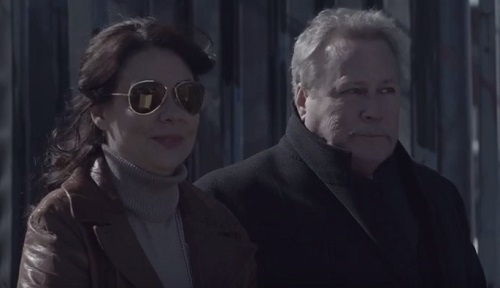 The biggest name in Broome Street Boys is John Heard (photo above), who plays an NYPD detective, best known for his role as the father of Kevin in Home Alone 1 and 2, and to all us mob buffs as the corrupt cop friend of Tony Soprano on the first season of The Sopranos.

“John worked with my girlfriend Patricia Rae (Big Wedding, Maria Full of Grace) - who plays alongside Heard in Broome Street Boys as his NYPD partner - on a film a while back. I met him on set through her. He’s been in our lives as a friend ever since. I told John ‘I’m gonna put you in one of my movies.’ He read my script, liked it and said ‘Yeah, I’ll do it!’ I’m really lucky that he’s been so gracious and flexible with this movie. Because it’s such a small project we need these veteran actors that want to act and understand the indie spirit and John’s one of them.” Asked what it is like shooting an independent film Matteo is surprisingly honest. “Volatile,” he says with a grin. “I’m not gonna lie. Because we’re making a film (photo left) for really low money I have to wear a lot of hats, my producers as well, and there’s no room for error. Too tight of a budget and when stuff goes wrong it’s monumental even if it’s something small. So I’m humbled, I know I need help. I’ll get the job done but it’s not a smooth ride. I have tunnel vision, emphasizing we need to get this film done. I want to have the patience to talk in a nice way but sometimes, unintentionally, the iron fist comes out. That’s the stress. Even big productions deal with egos, the budget, everything, so everyone has the same war stories. But they can replace someone, I have to walk a fine line to not lose anyone.”

Talking about stress, Matteo suddenly remembers a stressful moment many years ago when he was working at an Italian restaurant in the Bronx. “I was waiting tables there and I had just arrived and was putting on my uniform when one of the other waiters comes up to me and says ‘You know who’s coming in tonight?’ I go ‘No, who?’ And he answers ‘Gotti.’ I’m like I don’t want his table. God forbid I spill soup on the guy, I don’t want his table. I’ll just do the banquet room or whatever,” he jokes.

“Now I never met him. I don’t know anything about his crew or anything like that but it was a stigmata, it was the unknown. Like oooh the Gotti family. Or the Gambino family. There’s a certain mysticism to all of that. Writing stories about those guys, it’s a double edged sword. Some of the stuff that happened was really crude, and awful too, but it makes for a juicy and interesting story.”

It brings him to another revelation as to why all of us are so fascinated by stories about the mob. “As bad as the things were that these people did, with the Mafia there was a certain loyalty and honesty. Because if you weren’t there were ramifications. You’re paying the piper one way or the other. In society today there’s no accountability. Even kids growing up, parents can’t whoop their butt cause it’s child abuse now.”

When it comes to Broome Street Boys Matteo Ribaudo wants it to be a gritty, highly entertaining gangster flick with a banging eighties soundtrack. The movie is now almost done filming. “Two-thirds of the movie is shot, we have one-third left. About ten to twelve days of shooting,” he estimates. With only ten to twelve shooting days left he is almost there. If not for one big problem. “We’re tapped out,” he says. “We need 50k to finish it.” That’s 50k more than they have right now.

That is why Matteo and his film crew need your help! The guys are starting a crowdfunding campaign to help get the movie finished. Just like the crew behind the movie Veronica Mars, starring Kristen Bell, did a year ago.

Now, don’t take our written word for it. Instead, let Matteo Ribaudo himself ask you in this very funny pitch video to kick off his Indiegogo crowdfunding campaign: