The life of an outlaw is not for the faint hearted but outlaw bikers are turning up the action to levels more appropriate for a Hollywood movie than real life. A video released yesterday shows how a large group of bikers is involved in a wild shooting in broad daylight at a villa in a busy residential area.

The shooting happened in early October in the Dutch city of Eindhoven. Police received a call that shots were heard near a villa in a residential neighborhood in the city. “When we arrived at the scene we only found empty shell casings,” a police spokesman says. “But after searching inside the villa we found security videos that tell us more about what happened that day.”

Indeed. Two surveillance cameras monitored what went on outside the large villa. (Scroll down below to watch the video.) The inhabitants were obviously worried about their security. A guard dog was roaming the area as well.

At a quarter to four in the afternoon, an Audi arrives at the entryway of the villa. A man wearing a black jogging suit and cap gets out and can be seen walking up to the fence to take a peek. The guard dog approaches quickly and starts barking at this man who seems to be doing some reconnaissance. The gate door is open. Despite the gate, cameras, and dog, security seems lax.

In the background a Mercedes van rolls up and parks behind the Audi. Then two other men exit the Audi. These two are wearing vests and patches of Dutch outlaw motor club No Surrender. With the confident swagger of bikers who don’t take shit from anyone, they stroll up to the gate.

At that point the man living at the mansion and a friend come outside and walk to the fence as well. The men begin talking, though it is unknown what is being said, the outcome is unsatisfactory for both parties. As the conversation ends, the resident walks back to the villa and can be seen pulling out a handgun.

One of the bikers of No Surrender shoos off the guard dog, while pulling out a handgun of his own. As he walks through the gate he points his finger at the resident. He is followed in by the unarmed man in the black jogging suit and another full patch member of No Surrender who has his handgun raised and ready. Within seconds four other men can be seen exiting the van in the background. 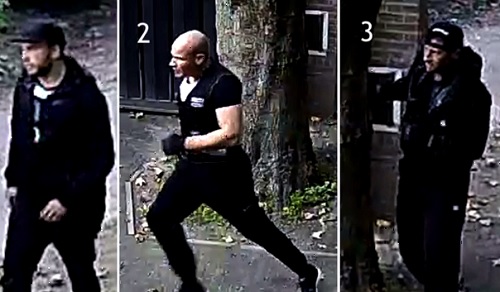 That’s when the bullets start flying. The two groups fire multiple shots at each other from extreme close range. Men can be seen stumbling around as bullets smash into the ground or car near them. Miraculously none of the 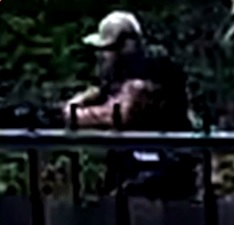 participants seem to get hit by any bullets.

Just another day in the life of an outlaw biker, I guess.

The identity of two No Surrender members is known to police, one of them, a 34-year-old is currently behind bars. Hence, they have been made unrecognizable in the video. The five other men who participated in the shooting are still wanted by police.

Dutch outlaw biker club No Surrender was founded in 2013 by president Klaas Otto and has quickly gained ground and notoriety in a scene that had been dominated by the Hells Angels. The club’s Amsterdam chapter is even led by Dutch Hells Angels founder and former president Willem van Boxtel, who was kicked out of his old club in bad standing. No Surrender has had several well-known Dutch gangsters as members, men like Heineken kidnapper Willem Holleeder and former cage fighter Dick Vrij. Both men have left the club and are currently suspects in a large extortion case. Last month, the club made the news after it reported three of its members had gone to the Middle East to fight terrorist organization ISIS.