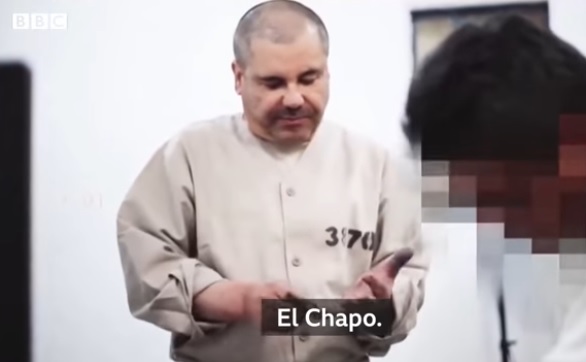 It’s a sight to behold: Mexico’s most powerful man in a prison outfit, wiping ink from his hands, calmly answering questions about his personal details posed by an official. Rare video footage was released by the BBC of drug lord Joaquin “El Chapo” Guzman arriving in prison in January of 2016.

This stay at Altiplano prison was peculiar as “El Chapo” had escaped from that same penitentiary six months earlier by having his Sinaloa Cartel underlings dig a tunnel under and into his cell inside the maximum-security facility.

The months that followed his prison escape caused a frenzy involving various raids, searches, a close and bloody encounter, a meeting with actress Kate del Castillo, an interview with actor Sean Penn, and, eventually, “El Chapo” Guzman’s arrest and return to a cell similar to the one he had left behind.

Guzman was found guilty of drug trafficking at a trial in New York in 2019 and sentenced to life in prison plus an extra 30 years.

You can watch the video of his arrival at Altiplano prison below: