The United States continues its fight against organized crime abroad. Yesterday, the United States Treasury’s Office of Foreign Assets Control sanctioned the Kobe Yamaguchi-gumi, a powerful group within the Yakuza, the Japanese Mafia, and three of its bosses.

The sanctions are aimed at two Yakuza groups: The Kobe Yamaguchi-gumi and its core clan, the Yamaken-gumi, and Kunio Inoue, Osamu Teraoka, and Takashi Ikeda, three of its leaders. As a result of these actions, all U.S. assets of those designated are frozen, and Americans are prohibited from engaging in transactions with them.

After the split between the Kobe Yamaguchi-gumi and the Yamaguchi-gumi, a gangland war has broken out throughout Japan, leading to several violent and deadly incidents.

And then there is the “money man,” Takashi Ikeda, who holds a key position in the Kobe Yamaguchi-gumi as the shateigashira (leader among brothers of the godfather) and head of the Ikeda-gumi subsidiary gang. His nickname is based on the fact that he controls large amount of funds for the Yakuza. Before the split, Ikeda once held a position as the regional leader of Yamaguchi-gumi clans in nine prefectures and oversaw 3,580 Yamaguchi-gumi members.

The U.S. Treasury has now designated seventeen individuals and seven entities affiliated with the Yakuza. It marks the second time a second-tier Yakuza affiliate has been targeted; the first designation was of the Kodo-kai in April 2015. Tadashi Irie and Toshio Masaki, previously designated on December 19, 2013 as members of the Yamaguchi-gumi, have also joined the Kobe Yamaguchi-gumi, as indicated in the chart below. 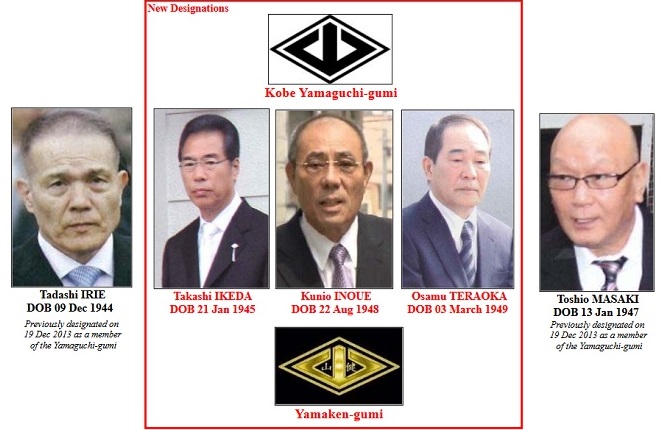 The Japanese Yakuza itself was labeled a significant criminal organization by President Barack Obama in the summer of 2011 and ordered the Treasury Department to find ways to undermine its criminal activities around the world.

The Yakuza has criminal affiliates in Asia, Europe, and the Americas, where it uses front companies in legitimate industries, including construction, real estate, and finance, to launder money and hide illicit proceeds. In the United States, the Yakuza has been involved in drug trafficking and money laundering, specifically in California and Hawaii.