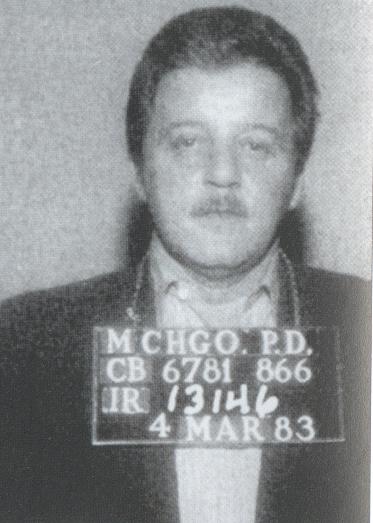 By David Amoruso
First published in the August/September 2007 issue of Mob Candy Magazine.

Anthony Spilotro arrived in Las Vegas in 1971. He was sent by the Chicago La Cosa Nostra Family, which most people call The Outfit, to oversee the mob's skimming operations. Several mob families were skimming money from the casino counting rooms. Huge sums were made through this scam. The mob bosses wanted the skim to proceed without problems. So they sent Tony Spilotro. Spilotro had made a name for himself in Chicago as a vicious murderer who didn't mind torturing his victims. His reputation instilled fear in hardened criminals which made him the perfect man to protect the mob's interests in Las Vegas.

In Las Vegas Spilotro quickly took control of the city's underworld. All criminals (drug dealers, pimps, loan-sharks) were ordered to pay Spilotro a street tax. If they wanted to continue doing business they paid, if they didn't pay, they died. Still hungry for more money Spilotro got together a gang of burglars. This gang would break into hotel rooms of rich gamblers, homes, and jewelry stores all over Nevada, California, Utah, and Arizona. The gang was called the Hole in the Wall Gang because of their modus operandi. They would gain entrance to buildings and stores by making a hole in the wall or roof.

Things went well for a while, but not for long. In 1979 Spilotro was added to the Las Vegas Black Book, an exclusion list which meant he could not set foot in any Las Vegas casino. It didn't deter him from running his illegal operations though. When an associate of Spilotro and his gang was shot by two cops when they pulled him over news of a contract on the lives of the two cops reached the Chicago FBI. The Chicago feds told Las Vegas police who sent a few men to Chicago to talk to the Chicago mob bosses. The cops visited the homes of Antonino Accardo, Joseph Aiuppa, and Joseph Lombardo. All three men weren't home so they talked to mob controlled businessman Allen Dorfman and told him about their problem. The cops then got a phone call from a lawyer who said the Chicago bosses would discuss the issue. The lawyer was asked to relay the following message: "If you kill my cops I'll bring forty men back here and kill everything that walks, moves, or crawls around all the houses I visited today. And that is not a threat, but a promise." The Chicago bosses wouldn't allow cops to be murdered, so the contract was lifted (meaning those responsible for the plans would be told to abort.) The bosses didn't like this kind of aggrevation.

On the Fourth of July, 1981 the Hole in the Wall Gang was going out to break into Bertha's Gifts & Home Furnishings, at 896 East Sahara. The store also included a jewelry shop. The gang was counting on a party afterwards since the expected loot would be $1 million in cash and jewelry. Operating that night were Frank Cullota, Lawrence Neumann, Wayne Matecki, Leo Guardino, Ernie Davino, Sal Romano, and corrupt cop turned full time criminal Joseph Blasko. The gang used five cars for the heist, one for transporting the guys who would do the actual break in and four to conduct counter-surveillance. These four cars were equippped with two-way radios and police scanners.

Around 19:00 Cullotta, Neumann, and Romano drove their cars around the neighborhood, looking for anything suspicious. Blasko parked his van across the street from Bertha's Gift & Home Furnishings. At 21:00 Matecki, Guardino and Davino arrived, they stepped out of the vehicle and unloaded tools and equipment, including a ladder. The men gained access to the roof of the store. Once there they plugged in their tools. They were using power and hand tools to penetrate the roof. At 22:40 Guardino had penetrated the roof and dropped through the opening into the store, bringing along his burglary tools which he needed to break into the safe. With Guardino inside the store cops started coming in from all angles. The burglars were surrounded. Outside, Cullotta, Neumann, and Blasko were arrested. Sal Romano was also picked up by police, but for different reasons: he had flipped a few months earlier and told police everything about the planned heist. The remaining six men were charged with burglary, conspiracy to commit burglary, attempted grand larcency, and possession of burglary tools.

With Spilotro's gang heavily hit by the bust and news of a rat amongst them, things started heating up. On Friday April 30, 1982 Frank Cullotta got some bad news: the Chicago Outfit had approved a contract on his life. The following Monday Cullotta officially became a cooperating witness. Cullotta would testify at several mob trials and even had an appearance as mob hit man in Martin Scorsese's mob epic Casino. Combining the Hole in the Wall gang fiasco, Spilotro's other criminal deeds for which he was indicted, and Spilotro's affair with the wife of casino boss Frank "Lefty" Rosenthal, the Chicago bosses made up their mind. They had sent Spilotro to Vegas to keep things quiet, and running smoothly. Instead of doing that Spilotro had made a mess. They decided enough was enough: he had to go. The badly beaten bodies of Tony Spilotro and his brother Michael were found on June 23, 1986 in an Indiana cornfield. Tony the Ant had met his demise.