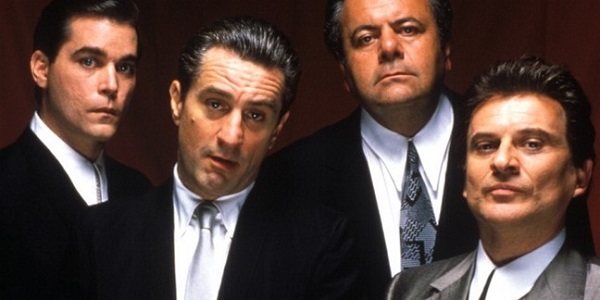 Goodfellas reinvented the Mafia movie genre. No doubt about it. Director Martin Scorsese outdid himself with his portrayal of the life and crimes of mob snitch Henry Hill. If you are reading this, chances are you’ve already seen this movie. If not: Shame on you and go get your fucking shine box!

For those who are unfamiliar with the story behind Goodfellas Gangsters Inc. has got all you need to know and then some.

Based on the book Wiseguy by Henry Hill and Nicholas Pileggi, the movie recounts Hill’s life from a teenager to a grown man. A life that, from the very start, revolves around one premise: “As far back as I can remember, I always wanted to be a gangster.”

The words are spoken by Hill, played by actor Ray Liotta, who from that point on embarks on a rollercoaster ride into the gritty New York underworld inhabited by guys known as Jimmy Two Times, Billy Batts, Fat Andy, Mo Black, Frankie the Wop, Freddy No Nose, Pete the Killer, and Jimmy the Gent.

You know what scene I’m talking about. For those of you don’t know, the guy named Fat Andy in this scene is played by Louis Eppolito, the disgraced NYPD detective who turned out to be in cohorts with the Mafia and was convicted of helping wiseguys whack their enemies. Coincidently, Eppolito was working for the same mafia family as Henry Hill, the Lucchese crime family.

Goodfellas is filled with classic scenes that any mob buff can repeat by heart at any given moment. If you know someone like that never ever tell them that you think they are funny. Trust me.

Backing up Ray Liotta are crime movie legends Robert De Niro and Joe Pesci, with Paul Sorvino in the background, not moving for nobody. Goodfellas is one of the all-time great mob movies and the true story behind it is every bit as fascinating as the movie.

Better yet, the true story didn’t end in the witness protection program. It ended somewhere on Howard Stern’s radio show if you ask me. The years in between could fill another movie about Henry Hill, but it would never be as intriguing as Goodfellas.