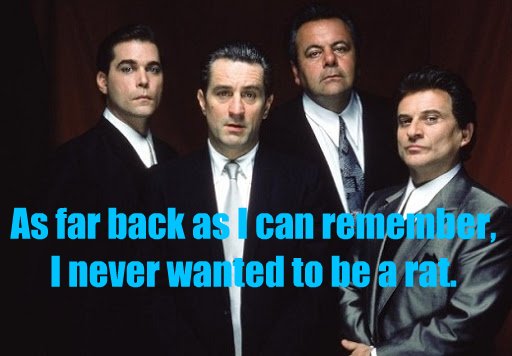 A year before his death, mobster-turned-snitch-turned-celebrity Henry Hill almost blew off an appearance on a radio show because of a comment I made about him. The whole incident gives some nice insight into the ego of a glorified street hustler and the powerful influence of fame.

After becoming a celebrity when his book “Wiseguy” was turned into the movie Goodfellas by director Martin Scorsese, Henry Hill was writing cookbooks in between getting drunk and high. He was arrested multiple times for drug abuse and his appearances on the Howard Stern Show were an embarrassment to both the crew and the show’s listeners as Hill was talking nonsense with a slur and bragging about murders he never committed.

When I heard that Henry Hill would be a guest on Crime Beat Radio I was very interested in hearing it. Presenters Ron Chepesiuk and Will Hryb always come well prepared and are experts on organized crime. I had no doubts that they would do a great job at interviewing Hill. However, I wondered which Hill (right) would show up for the interview. The problem with Hill was that there were two different versions people were looking at. One was the real thing and the other the glamourized version from Goodfellas.

With Goodfellas Martin Scorsese made an instant classic. Actors Robert Deniro, Joe Pesci, and Ray Liotta did an outstanding job at portraying a violent mob crew that terrorized New York during the 1960s till 1980. Ray Liotta shined as the charismatic, handsome Henry Hill who lived the life of a king until he descended into hell. The movie made the real life Henry Hill into a household name around the world. The story about his flashy, exciting life of crime was much sought after in the decades following the film and made sure Hill had some job security.

But the truth was that the movie showed the Hollywood version. The real Henry Hill was a creepy looking bald guy. A former gangster who still thought he could play the part even though no one took him seriously. To top it off Hill had a serious problem with illegal substances. In no way did he live up to the hype created by Goodfellas. And he knew it.

After putting up a promo blog for the upcoming Crime Beat Radio show I became involved in a discussion with a reader about Hill’s appearance. I posted the following reply:

“I think it is worth listening to the interview for a number of reasons. First: no matter what you think of the guy, he was involved with some heavy people who were the subject of a great book and awesome movie classic and he has the inside story on that. Second: he is a great example of a lowlife criminal who could never hide his true colors. He always remained a lowlife only this time without mob backing and without that backing a lowlife is a lowlife that has to stand on his own merit and make something of himself. Henry could not do that. I'm interested in hearing him tell us about that. Even if he thinks he is being honored, he has no clue we are just enjoying the train wreck in front of us. Cause in the end all the glamour of the mob cannot hide the fact that a lot or most of those guys are lowlifes without an inkling of respect. That is my opinion at least.”

Shortly after putting up my reply I got an e-mail from Ron Chepesiuk who said Hill had canceled his appearance due to the comment I had made. “Evidently you hurt Henry's tender feelings,” Chepesiuk wrote. I was surprised and shocked. While Hill was a guest at Howard Stern’s show callers had made far worse comments calling Hill every curse word in the book. Yet, he just sat there smiling. Add to that the fact that Ron Chepesiuk and I run our own separate thing and my comments in no way reflect Chepesiuk’s opinion. Luckily Chepesiuk and Will Hryb managed to calm Hill down and talk him back into doing the show which turned into a great interview.

Despite being a lowlife thug and informant, Hill still had an ego the size of Manhattan. After turning on his mob colleagues, he had to find a new way in life. He wrote a bestseller and became a celebrity after Hollywood worked its tinsel town magic with Goodfellas. Still, after all the stardust fell down and Hill was by himself once again, his ego was facing the same problems. He could not change who he was and what he had done. No matter how much booze and drugs he took, he would never like the guy looking back at him in the mirror. The low-level gangster who ratted on his mob buddies.

Another mob informant described that exact feeling of dread. Former Philadelphia soldier Nicholas “The Crow” Caramandi told crime reporter George Anastasia how he hated his new life as a turncoat in 2003: “It sucks. You’re not a human being no more. You become lifeless, a person without an identity. I’m this guy to these people and that guy to those people. I don’t know who I am. It’s awful. I don’t recommend it to nobody. It ain’t worth it for a couple of reasons. Mostly in your own mind… you feel a stink about yourself all the time. You feel like you’re a rat all the time.”

I guess my comment was a bit harsh. Though I meant every word of it, I have to ask myself whether I would have said it to Hill’s face if I ever would have met him? Probably not. Not because I was afraid of the Henry Hill we know, but simply to avoid having a senior citizen hopped up on alcohol and drugs break his hip after he fell while trying to take a swing at me.

I have to admit that it felt kind of good when I found out I had ‘hurt the feelings’ of the famous Henry Hill. But then I realized I wasn’t thinking of the Henry Hill whose feelings I had actually hurt. Rather I was thinking that I had hurt the feelings of the guy they based the gangster classic Goodfellas on. When I thought of the real life version, I only shook my head in disgust at how little I actually cared. And how much I let a movie get to my ego. I can only imagine how Goodfellas had fucked up Hill’s head. It inflated his ego to a breaking point and caused it to deflate every time he showed up somewhere as himself.

Of course, had it been the 1970s I wouldn’t have said one bad thing to Hill’s face. Mainly because his powerful and violent friends were kind of obsessed about honor and respect. They loved using sticks (preferably a baseball bat) and stones (preferably of lead) to attack those that had dared speak words that hurt their ego or disrespected them in any way. Only one thing left for me to do after telling this anecdote. I’m gonna go home and get my shine box.