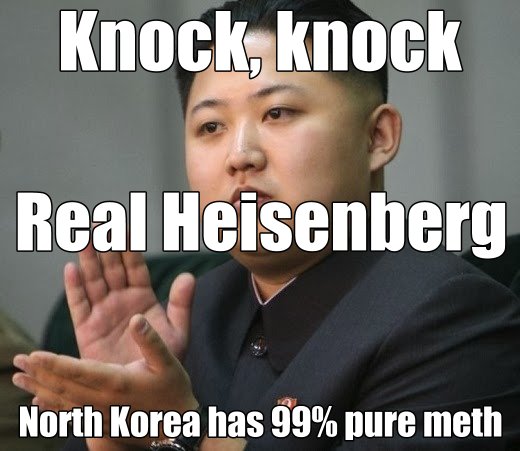 For everyone who thought Heisenberg was an American: Guess again. According to the DEA, the real Heisenberg is from North Korea, and he’s increasingly flooding the United States with his meth. A product that is 99 percent pure. He’s the one who knocks alright.

Five defendants were placed under arrest yesterday evening after they were extradited from Thailand. Each man is charged with conspiring to import 100 kilograms of North Korean produced methamphetamine into the United States.

“The men are part of a broader investigation that federal prosecutors made public in September, filing charges against a group of former U.S. and European ex-military men in a murder-for-hire and drug-importation plot,” CNN reports.

“Like many international criminal networks, these drug traffickers have no respect for borders, and no regard for either the rule of law or who they harm as a result of their criminal endeavors,” DEA Administrator Michele M. Leonhart said. “This investigation continued to highlight the emergence of North Korea as a significant source of methamphetamine in the global drug trade.”

The defendants all hail from another part of the globe. Two men, Scott Stammers (44) and Philip Shackels (30), are from the United Kingdom, Ye Tiong Tan Lim (53) is from China, Kelly Allan Reyes Peralta (41) is from the Philippines, and Alexander Lnu (43) is a resident of Thailand.

The one thing they have in common is that they tried to smuggle meth from North Korea into other parts of America.

In 2012, Lim and Reyes Peralta, who, according to the DEA, are members of a Hong Kong-based criminal organization, sold over 30 kilograms of methamphetamine that had been produced in North Korea.

99% pure. The world hasn’t seen that kind of purity since television series Breaking Bad in which Walter “Heisenberg” White cooked up his exclusive blue meth with great care upping purity levels through the roof of his camper.

In 2013, Lim and Reyes Peralta again agreed to provide North Korean meth, this time agreeing to supply 100 kilograms of the methamphetamine to confidential sources working at the direction of the DEA for importation to the United States.

Lim explained that his criminal organization is the only one currently able to obtain meth from North Korea: “Because before, there were eight [other organizations]. But now only us, we have the NK product. . . . [I]t’s only us who can get from NK.” Lim further explained that, because of recent international tensions, the North Korean government had destroyed some methamphetamine labs, leaving behind only the labs of his organization: “The NK government already burned all the labs. Only our labs are not closed. . . . To show Americans that they [the North Korean government] are not selling it any more, they burned it. Then they transfer to another base.”

Lim explained that his organization had stockpiled one ton of North Korean methamphetamine in the Philippines for storage, “because we already anticipated this thing would happen . . . [whereby] we cannot bring out our goods right now.”

They then agreed to deliver the 100 kilograms of North Korean methamphetamine in Thailand, from where they understood it would be shipped to the United States by boat. They arranged for a “dry run,” sending a shipping container of tea leaves from the Philippines to Thailand in order to test delivery channels that would later be used for the shipment of methamphetamine.

Stammers, Shackles, and Alexander agreed to provide security, transportation, and storage for the 100 kilograms of methamphetamine once it arrived in Thailand. Alexander, “the Sergeant-at-Arms of the Outlaw Motorcycle Club (“OMC”) in Thailand, was to be the “ground commander,” supervising an armed crew of OMC members providing security for the methamphetamine.”

Stammers and Shackels were to arrange for the 100 kilograms to be taken to a warehouse, counted, re-packaged, and delivered to a marina in Thailand, to be transferred to a boat that would deliver the methamphetamine to the United States.

In September 2013, Lim and Reyes Peralta traveled to Thailand in order to receive payment for the 100 kilogram methamphetamine deal. Stammers, Shackles, and Alexander were already there. With all men in one place, Thai police placed them under arrest and extradition to the United States was put in motion.

If convicted, each of the defendants faces a mandatory minimum sentence of ten years in prison and a maximum term of life.