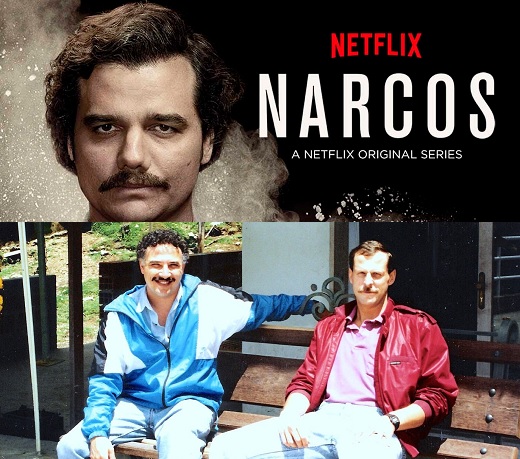 The hunt for Pablo Escobar, the world’s most wanted drug lord, was one of the largest and most violent of its kind. At the forefront of it all, were Javier Peña and Steve Murphy, two DEA agents stationed in Colombia, tasked with bringing down Escobar’s cartel. The two men are currently touring the world with their remarkable story about the manhunt of a lifetime. Gangsters Inc. was present to capture it all.

“Spoiler alert,” Steve Murphy begins his presentation with a smile, “Pablo Escobar gets killed.” As the audience erupts into laughter, Murphy has set the tone for what turns out to be a light-hearted, yet serious, talk about Pablo Escobar’s reign of terror as leader of the Medellin drug cartel.

Together with his former DEA partner Javier Peña -photo above shows Peña (R) and Murphy (L)-, the two lifelong friends discuss how they brought down the most notorious drug lord in history, how Escobar led his cartel, how he spent his money, the corruption, the smuggling, the drugs, and of course the violence and killings he ordered. The pair does over seventy of these shows a year, standing in front of sell-out crowds in the United States and around the world in Europe and Australia.

Thanks to the success of the Netflix hit series Narcos, Murphy and Peña find themselves in the spotlight with millions of people eagerly awaiting their true and personal account of the hunt for Escobar.

“The question I get asked the most,” Murphy tells us, “is which parts of Narcos are true and which parts are fiction? Well, after Netflix began airing the season, me and Pena sat down and watched every episode. We can now say that about one third of the show is fact, another third is based on fact but altered a bit for the show, while another third is all Hollywood.”

For instance, Peña points out that he was never a member of Los Pepes, the infamous hit squad that murdered Escobar’s men and allies and was hunting his mother and family, nor was he ever corrupt. Before they began shooting the series, Peña tells the audience, someone from the crew told him that they would dirty his character up a bit for the storyline, making him kind of corrupt. The producers asked Peña to sign some waivers so that he would not file a lawsuit once the series was released, which he did.

Murphy offers up some of his own reality checks as well. “I was never kidnapped,” he says, referring to episode 10 of season 1 titled Despegue, in which his character is kidnapped by the Cali cartel. If that would’ve really happened, Gangsters Inc. can only imagine the pressure the DEA and United States government would apply to get their man back in one piece.

Oh, and talking about kidnapping, Murphy did indeed adopt a Colombian girl – two even – but she was not the orphan of cartel violence. If he had picked up that baby at the scene of a murder and brought it home to his girlfriend, it would have been called a kidnapping, Murphy joked, saying the adoption went through all the official channels.

Narcos is a frequent topic throughout their presentation as the two men give the audience insight into the reality behind such an unbelievable story about a drug lord who became the 7th richest man in the world for three years in a row, who became a politician only to drop out and eventually wage two separate wars against the Colombian state.

At several points, they show very graphic images of the violence that occurred during the drug war. We get to see photos of the dead bodies of Escobar’s beloved cousin Gustavo de Jesús Gaviria Rivero and Medellin cartel boss José Gonzalo Rodríguez Gacha and his son. Gacha’s face had been blown to pieces by the bullets fired from a police helicopter hovering overhead as depicted in Narcos.

Peña and Murphy also show us several photos of Pablo Escobar’s dead body on the roof of the building where authorities had pinned him down after his long time on the run from police. Though neither man was present when agents confronted and killed Escobar and his sicarios, Murphy was at the scene quickly thereafter to snap some photos with his camera.

On one of those photos we see Murphy with a big smile next to Escobar’s dead corpse. It’s a photo that has earned him quite some criticism, he says. As an officer of the law he should’ve been serving and protecting life, not celebrating death, his critics say. But Murphy had good reason to smile, he tells us.

The man laying dead at his feet was responsible for some of the most atrocious acts in Colombia’s history. He had slaughtered thousands of innocent people during his wars against the Colombian government, bombing public buildings, shopping malls, police stations, and even an airliner. He had ordered the death of politicians, journalists, judges and their families. He even put up a $100-dollar reward for every cop that was killed.

Murphy was happy that man was now gone. Dead by the hands of those who swore to uphold the law and protect society. By killing Escobar, Colombia became a better place. After Escobar’s death, there was an 80 percent drop in the murder rate, Murphy tells us. If that isn’t a sign that justice was served then what is?