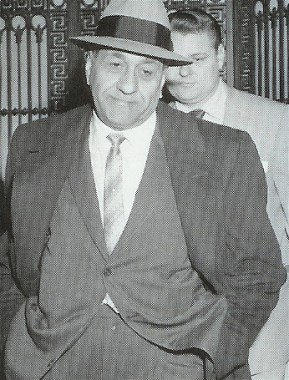 It was 1951. The Italian-American Mafia, known as La Cosa Nostra, was doing great. Throughout the United States the mob held sway. From the East coast all the way to the West coast, and everything in between was controlled by twenty-some mob families.

Well, there were some problems. During the days of Al Capone there was some competition, but they were dealt with in violent fashion. And by the 1940s, the "Capone mob" controlled Chicago.

By the late 1940s the "Capone mob" was called The Outfit, and was run by Antonino "Joe Batters" Accardo (photo right). He had acquired his nickname during his days as an enforcer for Al Capone. Accardo had smashed the skulls of two men with a baseball bat, an act that impressed his superiors, Capone allegedly said: "This boy is a real Joe Batters."

Accardo would turn out to be a much sharper boss than the man who made him a member at age twenty. One reporter wrote: "Accardo has more brains for breakfast than Al Capone ever had all day." He ran a tight ship. Under his leadership The Outfit forbode its members to deal drugs, and unlike in other cities, the rule was enforced. Several drug dealers turned up dead, sending a clear message to others looking to make a quick buck. Accardo didn't need the money the drugs provided, he had enough. Matter of fact, in 1951 he had just bought his dream house.

The Accardo family had for years lived in a modest ranch house at 1431 Ashland Avenue in the Chicago suburb of River Forest. The house did not attract any attention, which was a good thing, but at some point Accardo must've asked himself why he didn't enjoy his hard earned millions. What's the use of risking your life, when you can't enjoy the wealth that comes with it?

The house included high vaulted rooms, an indoor pool, a gun and trophy room, a pipe organ, a walk in safe, wood spiral staircases, carriage and guest houses on the backyard half acre. It was surrounded by a seven-foot-high wrought iron fence and two electrically controlled gates. After moving in, Accardo added a $10,000 black onyx bathtub and an indoor, two-lane bowling alley. He had the plumbing refitted with gold fixtures and added a massive barbecue pit to the backyard. For the Outfit leader the house was a way of showing Chicago he was top dog, and had the wealth to prove it.

By the late 1970s he had stepped back, letting others do the work and take the heat. But he was still available for advice. By all accounts he still was the most powerful mobster in Chicago, and thus a good man to have as a friend.

Harry Levinson was one of those men who could call Antonino Accardo a friend. Levinson had a successful jewelry store on North Clark Street. When he went to work one morning he found his store in a mess. He had been robbed of over $1 million in jewelry. He called 911 straight away. When the cops arrived they told Levinson that the thieves had done a superb job, leaving no traces. But they would do their best in finding them. Of course this didn't sound reassuring to Levinson. He knew he wouldn't get his jewelry back even if the burglars were caught. So he decided to call his friend Joe Batters. Levinson explained his problem to Accardo, who told him not to worry. A call was made to Las Vegas where The Outfit's Anthony Spilotro (photo left) protected the mob's casino skimming operations. Spilotro had been a burglar and knew the Chicago scene. He was asked if he knew who could've pulled off such a heist. Spilotro knew just the man, and pointed them to John Mendell. Shortly thereafter the entire loot was returned to Levinson.

In January of 1978 Accardo and his wife Clarice went to their condo in Indian Wells, to enjoy the sun, entrusting their house to long time friend Michael Volpe. But their holiday would be short lived. On January 9 they received a call from Volpe who told them someone had broken into their home. Nothing had been stolen but the house had been ransacked. This burglary was a personal insult to Accardo, no doubt about it. Someone was mocking him and it didn’t take long for Accardo to find out which burglars might have an issue with him. The thing is, Accardo wasn't the type of guy you made fun of, and the burglars would find out...very soon.

Las Vegas enforcer Anthony Spilotro was called back to Chicago to oversee this piece of business. On January 20 police found the body of Bernie Ryan. His throat had been slashed from ear to ear and he had been shot four times. Ryan was a known burglar, and when police discovered his body he had a police scanner on him, which is used by a lot of burglars to monitor police activity. Then, a known associate of Ryan was found dead. Steven Garcia's throat had also been slashed from ear to ear, but instead of being shot, Garcia had multiple stab wounds.

The next to turn up dead were Vincent Moretti and Donald Swanson. Moretti had been badly tortured, presumably because he was Italian and was expected to know better than break into the home of the boss. Moretti had been castrated and disemboweled. His face had been burned off with an acetylene torch. And he and Swanson also had their throats slashed. On February 20 police discovered the body of John Mendell, the man who could defeat most burglar alarms and who was believed to be the mastermind behind the burglary had also been tortured before his throat had been slashed.

It seemed as if the group of burglars who were responsible for the grave insult had all been dealt with, but Accardo wasn't finished. John McDonald was found on April 14, his throat slashed and he was shot in the head and neck. On April 26 Bobby Hertogs was found with his throat cut and his body riddled with bullet holes. Hetogs was the final member of the crew of burglars who could have been or were involved in the burglary of Accardo's home. But the bodies kept dropping.

In September of 1978 a federal grand jury held hearings regarding this situation. Accardo was called to testify, but he took the fifth and revealed nothing. Then Michael Volpe, the man responsible for watching the house, was called to testify. He spent a lot of time before the grand jury. Too much time. On October 5 his family reported him missing, and he hasn't been seen since.

The heat on Accardo intensified after that when the FBI searched his house and found $275,000, with some money bundles wrapped in bank wrappers from the Valley Bank in Las Vegas. Accardo must've been worried. He had to eliminate two more men, men who could tie him to the killings of the burglars. In 1979 two Chicago Outfit mobsters were murdered. John Borsellino and Gerry Carusiello had taken care of the burglars and had now themselves been taken care of. No more ties to Accardo. The $275,000 seized in the raid on Accardo's home was later returned to him. He never did any jail time in connection to these killings. Interestingly he never spent a night in jail in his entire life. He died of heart failure at Chicago’s St. Mary of Nazareth Hospital on May 27, 1992 at age 86.