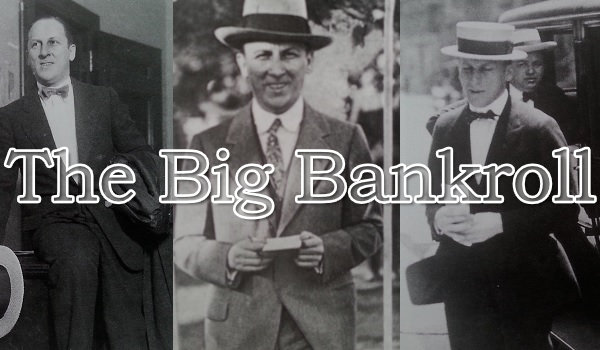 A criminal mastermind. The man behind the scenes. Mob kingpin. Arnold Rothstein can be described in many ways. Known on the streets as “The Big Bankroll,” he financed countless major criminal schemes and enterprises as he rose to prominence in New York’s gangland. But at heart, he was a gambler. Through and through.

If you can make one heap of all your winnings

And risk it on one turn of pitch-and-toss,

And lose, and start again at your beginnings

And never breathe a word about your loss;

If – by Rudyard Kipling

One could call Arnold Rothstein a man possessed. Surely his father, Abraham, thought so when he woke up one night to find 3-year-old Arnold standing over his younger brother Harry while holding a knife. “I hate Harry!” he told his father. It was clear young Arnold was disturbed by something. He didn’t feel loved, was insecure, and later refused to follow the path his successful, law-abiding and deeply religious Jewish father tried to put him on.

Rothstein stayed in school just long enough to realize he had a talent for numbers. Not just that, he was smart! He had a brain. But instead of putting it to use learning a trade or profession, he used it to hustle and gamble.

As a teenager he hung around bars and poolrooms where gambling – which was very much illegal – took place. Growing up around the gamblers, the suckers, the bookmakers, and the gangsters, he began to learn the ins and outs of this shady underworld. He calculated odds and found out ways – both honorable and not so much – to beat the house and win.

After a few years, Rothstein, now in his mid-20s, won way more than he lost. People noticed. Flush with cash, he carried his bankroll on his person and would lend out money at high rates to those in need.

To collect the debts owed to him, he hired stone-cold gangsters like the infamous Monk Eastman. It was his first step up. No longer was he just a gambler. He was beginning to turn into the man who would change the landscape of organized crime in New York City.

In late 1909, Rothstein invested in his own gambling house located on West 46th Street. Knowing that “the house always wins” he used well-connected male and luscious female associates to lure rich players to his joint. In return for their services he paid them 10 percent of what their ‘client’ brought in.

Day by day, week by week, month by month Rothstein got richer and richer. His criminal empire expanded adding more gambling venues such as floating games (games that moved from house to house) and began to include legitimate operations such as real estate and insurance services. He mingled with powerful politicians and businessmen, famous athletes and artists, while also working with members of the criminal underworld: gamblers, loan sharks, crooks, killers, thieves, and leg breakers.

Always, Rothstein was the odd man out. He was from a well-to-do family, but not quite. He was from the streets, but not really. He dressed elegantly and had fine taste, yet rumbled with the dirtiest of them. He gambled, of course, but he didn’t drink nor did he smoke. He drank copious amounts of milk and had a sweet tooth, loving cake and cookies, but that was it. As far as criminal overlords go that’s quite tame.

Perhaps that is why he won everyone’s trust. No matter their background, many of them used Rothstein when they hit a stalemate and wanted to reach an agreement to avert a conflict. When you needed a matter settled, you went to him for his objective opinion and guidance.

Those who were looking for Rothstein could find him at Lindy’s Restaurant in Times Square. There he met with his associates and underlings, heard offers, and took phone calls. He also accepted debt payments, but preferred to go hunt for those himself. He would personally pick a spot where he knew his victim would pass by and wait for hours just so he could confront him with the debts he owed.

One of the perks of being a loan shark, one guesses.

It was never enough, though. A dollar here, a hundred bucks there. Running a variety of gambling games from dice to cards, both honest and crooked, Rothstein always kept an eye open for that one big bet.

With his huge fortune, he became the equivalent of today’s tech billionaires who invest in young startup companies and share their vast experience with them. When Prohibition began and everyone got in on the illicit alcohol boom, Rothstein backed and bankrolled men like mob boss Waxey Gordon and young up-and-coming Mafia legends Charles “Lucky” Luciano and Meyer Lansky.

When it came to making money, Rothstein didn’t particularly care where it came from. He was involved in booze smuggling, fraud, loansharking, labor racketeering, robbery, theft, extortion, gambling of course, he was even among the first American crime bosses to get involved in the lucrative narcotics trade, setting up a pipeline between Europe and the United States.

Still, none of that was what eventually made him a legend. He had done that years earlier. In 1919. That year he fixed the World Series between the Chicago White Sox and the Cincinnati Reds.

It is something that seems impossible nowadays. Fixing the Major League Baseball’s World Series? Where would one find enough money to bribe those multimillionaires? Even back then, no? Well, they didn’t call him “The Big Bankroll” for nothing.

Several players on the White Sox were disgruntled and unhappy with their pay and how their club owner, Charles Comiskey, treated them. They sent out word to a few gamblers that they were willing to throw some games – or the entire series – if the price was right. That price turned out to be between $100,000 and $80,000.

The proposition was too good for Rothstein to ignore. He loved a sure thing when placing his bets. And besides, this was even better: It added the glamour and satisfaction of fixing one of the most famous sporting events in the United States.

On October 9, 1919, almost 33,000 fans at Comiskey Park saw the Reds beat the Chicago White Sox 10 to 5 in game 8, bringing the series to an end by winning 5 of the 8 games. Immediately, word of a fix spread throughout the country.

Even before the series had started rumors about foul play were swirling around in gambling circles. These rumors also reached several reporters who kept a sharp eye on the games. With the rumors now substantiated by the outcome, a wave of outrage swept the nation and baseball.

Big conspiracies involving dozens of people tend to be difficult to remain a secret. Especially when each participant is placed under a spotlight and publicly shamed for his, alleged, involvement. This fix was no different. As reporters and others began digging, the facts behind the 1919 World Series began to trickle through, those involved began to talk, and fingers were pointed at Arnold Rothstein as the mastermind behind it all.

As a result of the increasing pressure from both authorities and the public to capture and convict the men behind the World Series fix Rothstein went on the offensive and wrote a letter to a newspaper.

He stated: “My friends know that I have never been connected with a crooked deal in my life, but I am heartily sick and tired of having my name dragged in on the slightest provocation or without provocation whenever a scandal comes up. […] The unwarranted use of my name in this unfortunate scandal was the last straw. I made up my mind to retire from the gambling business as long ago as last June, as plenty of witnesses will testify, but this has led me to make the announcement publicly, instead of dropping out quietly as was my original plan. From now on I will devote most of my time and attention to the real estate business and to my racing stable. It is not pleasant to be what some may call a ‘social outcast,’ and for the sake of my family and my friends I am glad that the chapter is closed.”

Of course, this was, as they say, all bullshit. As prosecutors brought the heat, charging several of the gamblers and White Sox players involved, Rothstein was at work behind the scenes to ensure this outcome too would be fixed in his favor. He greased the right palms and made evidence, including signed confessions, disappear, after which the ones doing the confessing recanted their stories as well.

One by one, cases fell apart. All of the indicted White Sox players were found not guilty. And by the end of 1922, when all was said and done, Rothstein had gotten away with the biggest fix in sports history.

The problem with always winning and getting away with stuff is that it makes one feel invincible. A big loss is brushed aside. Debts go unpaid. Several businesses go belly up. Before long that aura of invincibility evaporates into thin air. While said person still believes he will get away with it all, those around him know different and are getting impatient.

By 1928, Rothstein’s behavior was beginning to become too much. His reluctance to pay his debts became a big annoyance to other gamblers. Among them gambler George McManus. He and Rothstein took part in a crooked high stakes poker game in which “The Big Bankroll” lost $320,000 in I.O.U.s. McManus was in the red for $51,000.

Worse, he was responsible for seeing to it that everyone involved paid their debts. Rothstein, meanwhile, was convinced that the game was crooked – rightly so – and refused to pay one cent.

To discuss their beef, Rothstein and McManus planned a meeting at the Park Central Hotel on November 4. McManus had several brothers who were (retired) police officers and who would attend the meeting, so Rothstein felt safe and left his firearm with a friend, telling him he’d be back in a little while.

Things didn’t go as the mob boss expected. Though the exact details remain unclear till this day, what is clear is that a wounded Rothstein staggered down the stairway of the Park Central. “Give me a taxi,” he reportedly told a member of the staff. Following it up with: “I’ve been shot.”

A bullet was lodged in his lower abdomen, but Rothstein insisted a cab take him home. He was taken to the hospital instead. It didn’t matter. Shortly thereafter, he succumbed to his wounds and passed away. He was 46 years old.

McManus was later arrested and subsequently acquitted of the murder of Rothstein. It remains unsolved to this day.

After his death, Arnold Rothstein became known not only as one of the most successful crime bosses in United States history, but also as one of the most progressive and innovative. His scope of operations encompassed a vast array of businesses and industries and his nose for new ventures proved unique. Coupled with his quiet demeanor and impeccable taste, it cemented Rothstein’s place in gangland history.