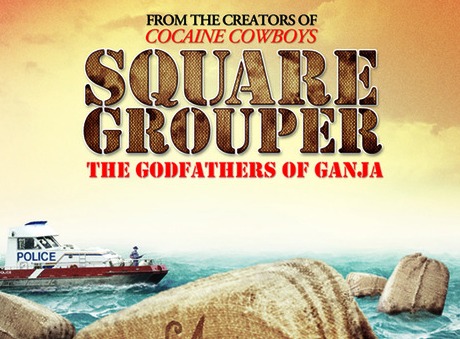 When the people that brought you the documentary Cocaine Cowboys have a new film out, you know it is going to be a must-see. And with Square Grouper: Godfathers of Ganja

, director Billy Corben and production company Rakontur live up to the high expectations with a colorful tale about weed smugglers in 1970s Florida.

Square Grouper is comprised of three parts that together paint the rich picture of the role that marijuana played in Florida and the United States in general during the seventies. In the first part the makers focus on a fundamentalist Christian sect known as the Ethiopian Zion Coptic Church that claimed the use of marijuana is part of their religion. Though I had never heard of this sect before, I had heard plenty of their ‘religion’ that allowed them to smoke weed. Many classmates in high school would jokingly use this excuse when they were caught in class stoned out of their minds. Their religion also dictated they keep their baseball caps on in class, by the way. It is interesting to see that a Christian sect actually used these excuses in real life.

Though this first part is intriguing, it never quite captured my attention. Perhaps because as a crime buff I want to see and hear about real gangsters and criminals and have less interest in Christian hippies. Luckily for me, the second and third part make up for this in grand style.

After the Zion Coptic Chrurch chapter is closed, we are introduced to the former leaders of the so-called Black Tuna Gang. One of the reasons this chapter works better than the first is the fact that the interviewees are such mesmerizing storytellers. Robert Platshorn especially. Starting the story with how the group’s leaders first met, the viewer is taken back in time through black and white photos and a vivid narrative told by those featured in those old photos. Platshorn would eventually serve 30 years in prison for marijuana smuggling as part of the Black Tuna Gang and become the longest imprisoned non violent marijuana offender. Obviously there is a lot more to this story, but the documentary does a great job and I do not want to spoil it by giving out any more information.

The third and final chapter deals with Everglades City, which saw 80 percent of its male population being sent to prison because of marijuana smuggling. This chapter shows how easy an entire village can fall for the lure of easy drug money when their own livelihood (fishing) is taken away. At one point entire families were active in the smuggling of bales of marijuana. The money poured in and the local police didn’t mind ignoring the crimes being committed in its territory for a nice share of the profits.

The viewer is introduced to a wide variety of people from Everglades City who have no problem telling about those crazy days when everyone and their mother was in the ‘business’. None saw any harm in it at the time, and if they hadn’t been caught I think most wouldn’t see the harm in it today. What is clear, though, is that the smuggling of weed was a different game than the cocaine business. All chapters of Square Grouper paint a picture of freewheeling men who committed crimes but would not get violent about it. As if they did not operate in the infamous world of drugs that was riddled with murder and torture. It’s as if these men were operating in a separate universe where smuggling was like fishing while vacationing in the swamps: Living in the wild, while taking a nap. As you watch, you start to go from being amazed to thoroughly enjoying this relaxed approach and the in-depth interviews in which the folks of Everglades City hold nothing back and tell it like it was, sparing no one, not even themselves.

Though Square Grouper: Godfathers of Ganja

lacks the fast paced action and extreme violence of Cocaine Cowboys, its producers manage to keep it interesting by creating the laid back tempo usually affiliated with marijuana (ab)use and adding their own much celebrated brand of interesting interviews and news clips that lure the viewer into a world not seen before.

While good gangster movies only come along once every five years, Rakontur has presented us with three great documentaries in that same timeframe. They focus on stories that have not been told in detail before, but most definitely deserve to get our full attention. With Square Grouper Rakontur has delivered another gem to bolster their impressive collection. It is available in a store near you and can also be ordered online at Amazon

. We at Gangsters Inc. look forward to any new Rakontur projects.