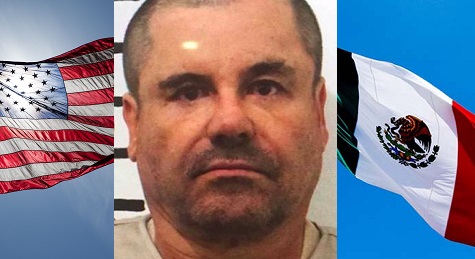 Joaquin “El Chapo” Guzman may be behind bars and on his way to an American prison cell, but that doesn’t mean that his Sinaloa drug cartel has stopped shipping narcotics into the United States. The DEA busted a Sinaloa-led drug trafficking operation in Buffalo, New York, which it called the largest drug ring ever dismantled in the area.

Seventeen defendants were charged yesterday with multiple drug offenses connected to their role in the Gil organization, named after its leader Jose Ruben Gil, who is nicknamed “The Mayor of Mexico.” He was helped by his right-hand man Herman E. Aguirre. Each defendant faces a mandatory minimum sentence of 20 years in prison.

According to the indictment, the group distributed thousands of kilograms of illegal narcotics, including heroin, fentanyl, and cocaine throughout the United States utilizing contacts and sources of supply from Mexico, California, and elsewhere for drug trafficking in Lockport, Niagara Falls, and Buffalo. Its leaders used numerous bank accounts at a financial institution to conceal and disguise the illicit proceeds.

“The Sinaloa Cartel’s reach from Mexico into U.S. cities is most evident in this investigation,” DEA Special Agent in Charge James J. Hunt stated. “The Gil Organization’s alleged trafficking turned the city of Buffalo into ground zero for fentanyl and heroin trafficking in New York state; fueling drug addiction, overdoses and violent crime. Through an unprecedented collaboration between law enforcement, DEA and our law enforcement partners we have successfully dismantled the organization that spanned from Mexico to Buffalo at all levels of operation.”

“This organization represents the largest drug trafficking organization ever dismantled in this District, responsible for distributing tons of heroin, cocaine, fentanyl and marijuana on the streets of Buffalo, Lockport and Niagara Falls,” said U.S. Attorney William Hochul. “The organization utilized front companies, deliverymen, and wholesalers to import and distribute the drugs in this area, and bookkeepers and money launderers to conceal the tens of millions of dollars sent from Buffalo back to the suppliers. Some intended user of these illegal drugs will potentially be alive tomorrow, thanks to the work done by law enforcement today.”

Prosecutors allege that members of the organization created fictitious front companies to disguise their drug shipments. Companies like Triton Foods, Inc., Fresh Choice Produce, and Corral Seafoods, LLC, made sure the dope stayed hidden beneath a thick, smelly layer or fish.

As well as an added layer of paper.

For instance, the defendants disguised kilogram quantities of heroin, fentanyl, and cocaine on pallets described on inventory and other documents as containing “Sea Cucumbers.” The pallets bearing the illegal narcotics were secreted in containers sealed with foam or spray insulation to avoid detection by law enforcement.

The investigation further determined that between June 2013 and September 2015, the organization additionally distributed over 5,000 pounds of cocaine, heroin, fentanyl, and marijuana in the Western New York area. The indictment alleges that approximately $20 million was sent from Western New York banks to California in a one-year period of time.

$20 million dollars in one year. Not bad. But for the Sinaloa cartel it’s just another day at the office. A 2015 DEA report shows the cartel controls a majority of the drug flow into the United States. This bust was just one piece of a very big puzzle. It will take much more to win the war on drugs. Just like the arrest of the Sinaloa cartel’s top boss, “El Chapo” Guzman, also did nothing to stem the flow of narcotics.

Where there is a demand, there will be a supply. Take down one supplier, up pops the next one. The DEA realizes this and has said that the investigation into remaining members of the Gil organization continues.