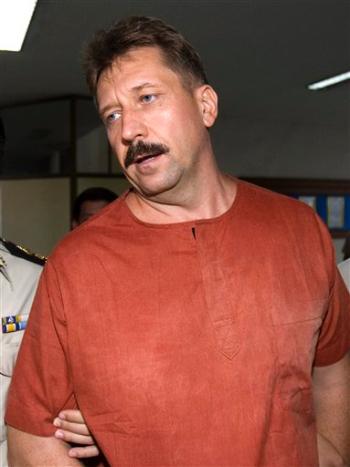 Viktor Anatoliyevich Bout is born on January 13, 1967 in Dushanbe, Tajikistan. Not much is known about his early life, but at one point he joined the military and after training began working at a Russian military base in Vitebsk as a navigator. After a few years he expanded his duties and also began training commando troops of the Russian Airforce.

In 1991 Bout graduated from Moscow's Military Institute for foreign languages and could speak six languages fluently, he now expanded his duties in the military and became a translator for the Russian army in Angola, Africa. Though not for long, because in that same year, 1991, the military base where Bout was working was disbanded as a result of the collapse of the Soviet Union. Bout and his fellow officers were out of a job.

Bout and his associates were well trained, had access to all the equipment they needed and more importantly had all the international contacts. And so it was that Bout started Transavia Export Cargo company which in 1993 helped supply the Belgian peace keeping forces in Somalia, Africa. And that wasn't the only work Bout's company did. Once his company had been set up Bout had made contacts with an Afghani group called the Northern Alliance and was selling them large amounts of weapons. From 1992 untill 1995 he supplied several Afghani groups with tons of amunition and weapons. With the money he made from these deals, allegedly $50 million dollars, Bout expanded his arms dealing empire.

In March of 1995 Bout started a company in the Belgian city Oostende (Ostend) named Trans Aviation Network Group. The company had a difficult start when their main customer, the Afghani Northern Alliance, was pushed out of power by the Taliban. In May of 1995 a plane filled with weapons and ammunition destined for the Northern Alliance was intercepted in Afghanistan by the Taliban. The crew was held captive until 16th of August, 1996 when they managed to escape.

Not long after Bout had a new customer, the Taliban. It wasn't his first contact with the Taliban he had sold them weapons before but not in the large shipments he sent them now. Business was good. Bout enjoyed his life, in Ostend, Belgium he bought a mansion and had several expensive cars. In Moscow he bought an apartment in one of the more exclusive neighborhoods. But life in Belgium didn't stay sweet for long, in 1997 Belgian newspapers published reports about Bout's shady operation and when Belgian authorities started looking into his business Bout moved to the United Arab Emirates.

His United Arab Emirates company was also founded in 1995 and, based first in Sharjah and later in 2001 in Ajman, would be his main base of operations. The U.A.E. was a perfect place for a man like Bout, it was a major financial center and a cross road for East and West trade and with its bank secrecy laws and free trade zones it was paradise on earth for an arms dealer.

From his base in Sharjah Bout ran his empire which also by 1995 included Africa. In 1995 he founded Air Cess in Liberia, this would mean the beginning of his grip on weapons supplying in Africa. Bout didn't care who he supplied with weapons or for what cause as long as people paid him his money. U.S. and U.N. officials say Bout airlifted thousands upon thousands of assault rifles, grenade and missile launchers and millions of ammunition rounds into Africa. Clients of Bout's companies include Angola, Cameroon, Central African Republic, Democratic Republic of Congo, Equatorial Guinea, Kenya, Liberia, Libya, Congo-Brazzaville, Rwanda, Sierra Leone, South Africa, Sudan, Swaziland and Uganda. You could almost say that without Bout there would be peace in Africa.

Most of the weapons that arrived in Africa came from Bulgaria where Bout had made frequent trips between 1995 and 2000. In 2000 Bout was seen visiting six weapons factories there. Between July 1997 and September 1998 Bout organized 38 flights with weapons shipments worth an estimated $14 million dollars to African nations. In the summer of 2000 four of Bout's planes landed in Liberia with weapons on board. The shipments contained helicopters, armored vehicles, anti aircraft guns and automatic rifles. By now ofcourse law enforcement was beginning to understand Bout's place in the world af arms dealing and decided to take him down, something that would be more difficult than thought at first.

By the time the world took notice of Bout he was safely in his home in Sharjah in the United Arab Emirates. By now Bout had made the political connections and money that made him almost untouchable. And on top of that, the law enforcement units didn't even have any proof. While investigating Bout's empire several of the law enforcement units went crazy. Bout's empire was a maze of people, companies, planes and routes. It was impossible to check where and when Bout's planes flew and which planes belonged to him. Bout kept moving himself and his companies around and had nothing registrated in his own name. When they finally had the evidence to charge him Bout was protected by high placed U.A.E. royalty and officials such as Sultan Hamad Said Nassir al Suwaidi, advisor to the ruler of Sharjah, who apparently also co-owns one of Bout's companies. The world wanted him bad but when he seemed too far out of reach the interest to catch him died down as well as the intensity with which he was hunted. Then came September 11, 2001 which changed everyones priorities.

On September 11, 2001 Al Qaeda terrorists attacked New York and the entire free world. Al Qaeda was very close to the extreme muslims of the Afghani Taliban, a group that was supplied with weapons by Bout. After September 11 Bout became a top priority for the U.S. Old evidence was pulled from the shelves and new evidence was collected. His name was everywhere, in newspapers on television. Everyone knew of Victor Bout's arms dealing empire. But no one knew where Bout was or how to cath him. By now the U.S. and Interpol were looking everywhere but couldn't find him, the United Arab Emirates were hesitant to cooperate but eventually caved in although one can only guess if they really did. And even if they did Bout was always safe in his homeland Russia where corrupt officials knew how to hide a man like Bout. Russia was asked by the U.S. and Interpol to deliver Bout and at the height of the tension Moscow decided to give a press conference in which they said that Bout wasn't in Russia. It turned out to be an enormous blunder because at exact the same time as the Moscow press conference Bout was giving his own conference at Moscow radio station Ekho Moskvy in a live interview in which he claimed his innocense and told that he "was just a businessman".

On March 6, 2008 Victor Bout was in a five star hotel in Bangkok, Thailand negotiating an arms deal worth millions. His buyers were members of the Colombian FARC, and they were eager to get the deal done. Bout was offering them more than 700 surface-to-air missiles, thousands of guns, high-tech helicopters, and airplanes outfitted with grenade launchers and missiles. Everything looked perfect for Bout, just another smooth deal, like so many others he had organized throughout the past twenty years. But unbeknownst to him, the FARC rebels actually were undercover agents part of an American-led sting operation. Thai police arrested Bout on the spot. At this moment Bout is still fighting his extradition to the United States where he faces four terrorism-related charges. His future does not look good.

In August of 2010, a Thai court ruled Bout is to be extradited to the United States to stand trial on charges that he conspired to sell arms to Colombian rebels. Bout's Russian friends in high circles have already made a pledge they will do everything they can do bring him home to Russia. The BBC quoted Russian Foreign Minister Sergei Lavrov as saying the ruling was "unlawful" and that his government believed it was made "under very strong external pressure". If Bout is convicted he will face life in prison in the United States.

At age 45, the infamous Lord of War was handed a 25-year prison sentence by an American judge. You can read more about his sentencing and conviction here.

On July 28, 2022, it was reported that the U.S. was planning to exchange Viktor Bout for two American citizens locked up in Russia. Full story here.