Semion Mogilevich was born on June 30, 1946 in Kiev, Ukraine. Not much is known about his early years and he doesn't become known to the police untill the 1970s. In the early '70s Mogilevich was part of the Lyubertskaya group in Moscow. He was a smalltime crook, trying to stay ahead of the communist government he was getting by with petty theft and fraud. During this career of crime he did 3 years in prison for selling currencies on the black market and another term of 4 years in prison for currency dealing offences. This was all petty crime and hardly made Mogilevich any money. His first big score came in the 1980s when scores of Russian jews emmigrated to Israel and the U.S.. He made deals with them that he would buy their possessions and would sell them on the markets and that he would send them some nice money from those deals. In reality he didn't send anything and made loads of money off of the Jews who were rapidly trying to leave. By the 1990s Mogilevich had made several millions, he had invested his Jew rip off money and made money through weapons smuggling, prostitution, gambling, drugs and black market items. The 1990s were a weird time, the Soviet Union was collapsing and the Organized Crime groups were getting more powerful than ever before. Wars errupted over the Soviet treasure and Mogilevich, along with his top employees, decided to leave Moscow for Israel.

In Israel Mogilevich became an Israeli citizen and layed relatively low. He made contacts with other Russian and Israeli Organized Crime groups, kept running his foreign businesses and expanded his criminal empire. Mogilevich invested all of his illegal money in companies. He bought nightclubs, precious stones factories, art, liquor factories and more, he used some of these companies as fronts and used them to expand his illegal empire. One thing Mogilevich also bought was a weapon factory. According to himself he "bought that factory in Hungary in 1992 and it still hasn't sold one single armamant". The factory mentioned sells anti aircraft guns/missiles and mortyrs. In 1991 he married his Hungarian girlfriend Katalin Papp, this marriage allowed him to move to Hungary and live there. Once he arrived in Budapest, Hungary he set up his criminal organization. He bough nightclubs and restaurants. According to F.B.I. records he built up an organization in Budapest of 250 members formed after the Cosa Nostra Family model.

Budapest looked like the paradise Mogilevich was waiting for, but eventhough he had most of the politicians and cops in his pocket or scared beyond their belief the Hungarian government still tried to show Mogilevich and his criminal friends that they weren't welcome. On May 31, 1995 a restaurant called "U Holubu" that was owned by a company owned by Mogilevich was raided by police. The Hungarian criminal intelligence said that at this restaurant 2 Russian speaking criminal organizations were meeting, one from Moscow and one from the Ukraine. All men present were arrested and later released. Mogilevich didn't attend the meeting. When asked about the meeting Mogilevich said: "Yes, on May the 31st 1995, my comrade Victor Averin had his 38th birthday. And he got together his friends, who had agreed this with him, and their wives and children, to celebrate his birthday in the Czech Republic at the U Holubu restaurant." When asked if he was planning on attending this 'party' Mogilevich said yes, on the question why he had not and if he had been tipped off he answered that his plane was "running more than 45 minutes late. I was meant to be at the restaurant for 9.30pm, that's what we'd agreed over the phone. At 10.45pm I had only just landed. By the time I arrived at 'U Holubu', the raid was already in full swing. I went to the neighbouring hotel and sat in the bar there until about five or six in the morning. Then I got in a taxi and went to Budapest." This raid was only a small trouble for Mogilevich and his organization. It was a desperate police action by a government that knows it needs to do something to maintain it's authority and power over criminals that have so much more of that power and authority. 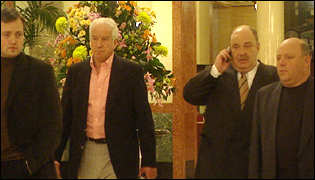 Mogilevich's criminal empire currently operates in Europe (including Italy, Chech Republic, Switzerland and Russia) the United States, the Ukraine, Israel and the United Kingdom. And also has dealings/contacts with Organizations in South America, Pakistan and Japan. Mogilevich is considered one of the smartest and most powerful gangsters in the world and so far no one has been able to stop him. In 2000 it became known that the F.B.I. had set up a joint task force with the Hungarian Police to combat Organized Crime in the region and Eastern Europe in general, it will be interesting to see how Mogilevich will deal with these feds who have got the U.S. Italian Mafia in a tight deathgrip. Chances are however that the F.B.I. has arrived too late it looks like Mogilevich has become too powerful, even if he himself keeps insisting that he only sells grain and wheat.

UPDATE: In January 2008 Semion Mogilevich was arrested in Moscow in connection with an investigation into an alleged tax evasion scheme by the owners of Arbat Prestige, a lucrative chain of Russian cosmetic stores. "Around 50 police commandos grabbed Mogilevich on the street near a supermarket along with Vladimir Nekrasov, Arbat Prestige's majority owner. The two men, who were accompanied by bodyguards, surrendered without a fight." Mogilevich later was officially charged with large-scale tax evasion. He faces up to six years in prison, if he is convicted.