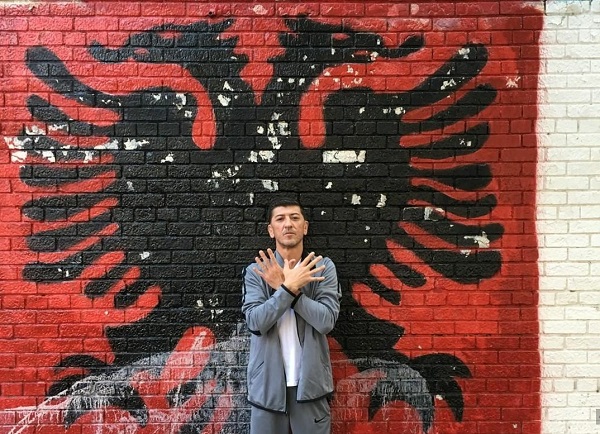 Underworlds evolve. In New York, various groups constantly vie for the city’s lucrative rackets. From the Irish and Italians to the Asians and Blacks, each ethnicity and country seems to make a power move. Since the 1990s, Albanian gangsters have made their presence felt. In his new film “Albanian Gangster”, filmmaker Matthew A. Brown tells their story, as he delves into the “war-torn psyche fused with honor code” that fuels their violent climb to the top.

“In the underworld your actions and words actually have consequences,” Brown tells Gangsters Inc. when we ask him about what makes this topic so fascinating. “You can’t just mouth off and act like a big shot, like our politicians or so many celebrities, and then not expect something to happen. If you betray someone, or go back on your word, or talk shit behind someone’s back, something’s going to happen. Themes of honor, loyalty, betrayal, these are also the themes that most excite me, maybe because I grew up in an environment (I come from South Africa), where your word, and your ability to stand on your own two feet, is who you are as a man.” 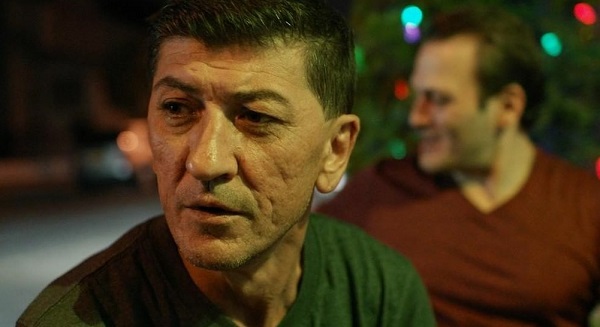 Obsessed with killing a snitch

These themes run throughout Brown’s film “Albanian Gangster”, which follows Leon, a former member of an organized crime group, as he tears his way through New York, obsessed with killing the snitch that sent him away to prison as a young man. 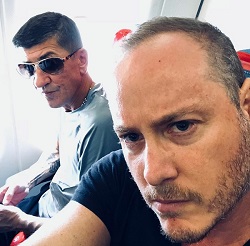 Making a gangster flick was high on Brown’s (photo right, Brown on the right next to John Rezaj) list, but at first he had difficulty finding the right subject. “Everything felt so played out — the Italians, Russians, Irish, Cartels, Triads,” he explains. “Then I landed on this series of articles about an FBI sting where eighty-plus Albanians were taken down in New York in the mid-2000s, and it sent shivers through me. Not only that I’d never seen a U.S.-based Albanian gangster film, but even more so the cultural aspect — that these guys were to this day living by these ancient honor codes, which is in part why they were so difficult to penetrate, why they’d never rat. They’d also come to the US fresh from conflict and persecution, in the case of the guys in the articles, from the Kosovo conflict, before that the Balkan conflict, before that Communist persecution, and on, going back centuries to the Ottoman Empire. So, this war-torn psyche fused with this entrenched honor code.”

The Bronx: Base of the Albanian Mafia

Brown dived into the shadowy world of Albanian organized crime and began researching it for his script. He went to the Bronx, where an Albanian mob crew led by Alex Rudaj had its base, he talked to journalists, and simply tried to get a feel for the hustle and bustle that would serve as the backbone for his story.

“But as I was working, this feeling was nagging at me, like I just didn’t have the sound of these guys in my blood,” Brown tells us. “To do something authentic and raw, the kind of thing I was looking to do, I had to get to know the actual guys, the way they live, breathe, move.”

I know a guy

He started asking around and talked to a few people who might know some other people. Once he gained their trust, he was introduced to John Rezaj (photo below). “Once I met John, the floodgates opened. I spent about a year and a half on the ground with him as my guide.” 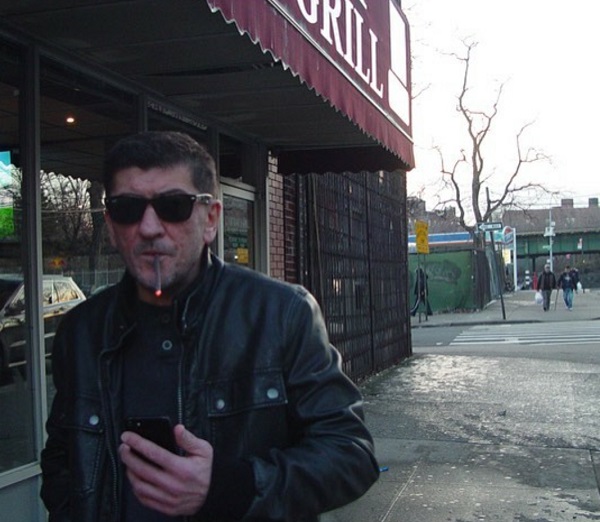 At this point, Brown had a nearly finished 120-page script, but after touring with John, he knew he had to start over. “Everything I was witnessing through John, the people, faces, places I was coming in contact with, were just so unique and captivating and not something I could’ve just written from books or whatever. So a month before prep I abandoned the script, and re-wrote it based on things I was hearing and learning.”

Not just that. He also decided to cast John Rezaj as the lead in his movie.

“From the moment I met John, it was clear there was something very unique and special about him, and as a filmmaker you see it in his every move, the way he interacts with people, the way they react to him, his charisma, his volatility, and of course the way he pops on camera— his face alone tells more stories than pretty much any actor out there. So again, like I said I re-wrote the script and fashioned the story around him, sat him down one day, read it to him, and told him I wanted him for the lead.”

“I grew up in a gangster’s paradise”

Playing Leon, a former gangster, was not that big of a stretch for John Rezaj, as he explained to the New York Times. “I grew up, you could say, in a gangster’s paradise,” he told the newspaper in a 2019 interview. He came to the United States from Albania when he was just 6 years old and ended up in the Bronx. He quickly had to toughen up to survive. “What 15-year-old do you know who has to come out of his house with a gun?” he asked the New York Times reporter. “You had to become someone else to survive. I had to be what the streets demanded.” When he was 20 years old, he got into a fight with a postal worker after a traffic dispute. When Rezaj saw the man a few months later, he beat him with a baseball bat. He was convicted in federal court in 1992 of felony assault on a federal employee and would serve over four years in prison for his violent crime. After getting out, he opened up his own café and stayed out of trouble.

Still, he lived that life for quite some time and knows it better than most. He remains on edge wherever he goes. “Out here, my guard is never down,” he told the New York Times. “I’m a well-known person in this town. There are people out here who don’t like me. A lot of things from the past, they just don’t disappear.” A scar on his right forearm is proof of that. It’s the spot where a bullet passed through over a decade ago.

From convict to award-winning actor

Brown was surprised and impressed with how well Rezaj did on camera. “His ability to be so present in the moment, to so completely give in to the imaginary circumstances. He’d actually surprise everyone on set in virtually every moment — because he himself wouldn’t know what he was going to do. There were times, like in the scene in Bear’s apartment where Bear’s talking about the guns, where there was this palpability of violence and danger to the point that most of the crew couldn’t be in the space.”

Rezaj’s acting was lauded not just by his director. Last year, he was awarded the John Garfield Award for Best Actor at the Method Fest Independent Film Festival in Beverly Hills. He had to split the prize with fellow winner Ethan Hawke. A tremendous honor for someone who made his acting debut. 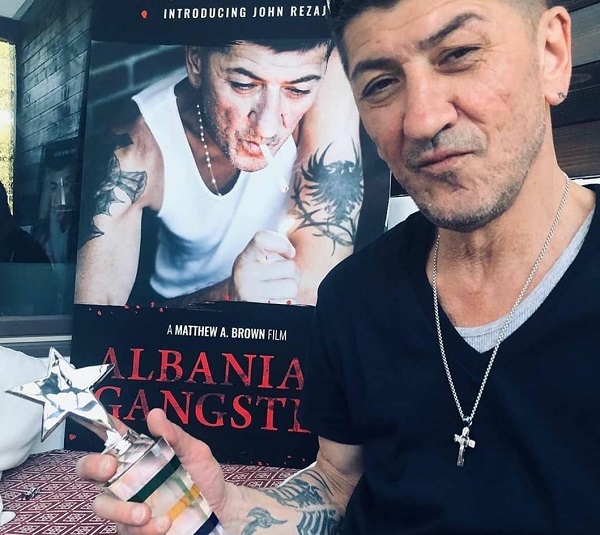 This code of honor intrigues Brown. “For me, it’s the fusion of these ancient honor codes entrenched in so many of these guys’ DNA with their coming fresh out of war zones. But it’s that and so much more. Like how the guest is treated in Albanian culture. The guest is revered! So much so that if your sworn enemy shows up at your home as a guest, for the time that he is in your home, he will be treated like a king, with love and respect—and then… So, along with the ‘capacity for extreme violence’ that some people associate with Albanian criminals, for me there is this deep love and warmth that you can’t just manufacture—it’s there, in the people and the culture.” 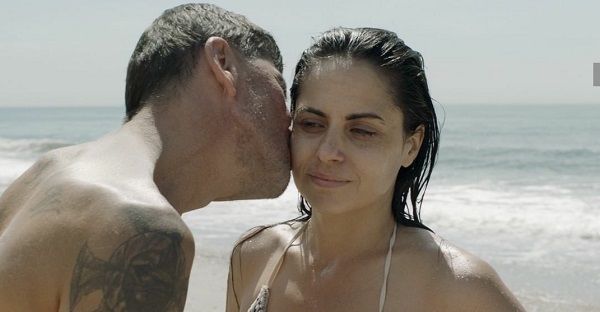 Where to watch Albanian Gangster

“Albanian Gangster” was shot in 12 days on locations in the Bronx, Queens, and Brooklyn and features a small, mostly nonprofessional cast from the Bronx. The film is currently on Video On Demand in the U.S. and will start streaming on Amazon Prime on May 3. It debuts in Europe this month, starting in the United Kingdom, also on Amazon, and then branching out from there. By the end of this month, it will also be on Amazon in Australia, New Zealand, and South Africa. And within the next month or two it will be all over Europe and beyond.

Watch the trailer for Albanian Gangster below: