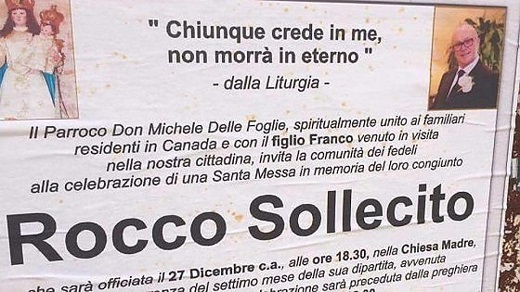 A mass in memory of murdered Montreal Mafia boss Rocco Sollecito has been canceled, Italian news agencies report. The priest at the church in Grumo Appula, a town near the city of Bari in Italy, had wanted a public ceremony in memory of Sollecito this Tuesday afternoon. Father Michele Delle Foglie even put up posters on the village’s streets announcing the ceremony. But once his higher-ups got word of the controversial mass, they shut the church down.

Sollecito was shot to death in broad daylight in May of 2016, as he sat in his white BMW SUV just a few hundred meters from police headquarters in Laval, a city north of Montreal. He was one of many high-ranking Montreal Mafiosi who fell victim to the city’s deadly gangland war that has ravaged various criminal factions. Sollecito’s criminal record is lengthy and dates back decades. His son is also involved with the Montreal Mafia.

A letter announcing the cancellation of the mass in honor of mob boss Sollecito was placed on the church’s website yesterday evening. In it, the church’s monsignor Francesco Cacucci, wrote that he, “Immediately reported the incident to the police commissioner, acknowledging and obviously sharing the fears, he issued an order by which it formally forbids the celebration in public and solemn form of the mass in memory of Mister Rocco Sollecito.”

Father Michele Delle Foglie had wanted the mass to honor Sollecito and had been trying to pay his respects to the slain crime boss ever since his death. He had planned a grand funeral for Sollecito in June, but was told he could not by local authorities.

The town’s mayor told Italian news agency ANSA that, “Because of his family's business activity, which is trying to open the region's biggest composting plant against the wishes of the town council, Delle Foglie is ‘incompatible’ with his parish.”

It is not unusual for the Italian Church to get into trouble regarding its respectful treatment of Mafiosi - even when those same gangsters had several of their colleagues killed. As author Carl Russo wrote on Gangsters Inc. a while back, “On May 29, 2016, a religious procession wending its way through the city of Corleone, Sicily, allegedly stopped to pay respect to the first lady of Cosa Nostra, Ninetta Bagarella. She's the wife of Totò Riina, the elderly godfather serving several life sentences for the many murders he ordered during his reign as the Mafia's Numero Uno.”

Among those murders, was that of a priest, Giuseppe “Pino” Puglisi. Apparently, for some members of the clergy, the rule of God is one thing, but the rule of the Mafia is another. And in some cases, they prefer the dark side. Choosing the easy path to riches, avoiding vandalism, a beating, or death. Opposing the Mafia is something only those that truly believe, can do. It takes courage and a strong belief in oneself and the triumph of good over evil.