Longtime New England mobster Anthony “The Saint” St. Laurent Sr. made quite the reputation for himself. Known for violence, a listing in Las Vegas' infamous Black Book, you could say he'd done well. On October 26, 2016, he was released from federal prison after serving seven years on a murder-for-hire beef. The 75-year-old mob capo died two weeks later.

“The Saint” has been a prominent player in the Rhode Island and Boston underworld for several decades. His arrest record goes back to 1959 and includes a staple of typical mob crimes related to illegal gambling and bookmaking.

St. Laurent’s criminal record combined with his reputation as a made member of the Patriarca crime family and an indictment charging him with illegal bookmaking in the summer of 1993 resulted in the Nevada Gaming Control Board placing him on its casino exclusion list – also known as the Las Vegas Black Book - in September of 1993.

He proved the Board correct in its judgement, when, in 1999, he was convicted in Rhode Island of extortion, loansharking, and operating an illegal sports book.

When it came to the Mafia and its criminal business, St. Laurent was tenacious and in for life. He even continued running his gambling operation from behind bars.

As he grew older, times changed. Gone were the days of “running the streets” and living above the law. The mob’s power had dwindled and the times of bold, brazen shakedowns were a thing of the past. Something “The Saint” was confronted with in 2006, when he pleaded guilty to conspiring to extort $100,000 each from two Massachusetts men.

This wasn’t the way things used to go down for an old-school gangster like St. Laurent. And make no doubt about it, Anthony “The Saint” is definitely part of the old school.

Case in point: When his former associate and fellow mobster Robert “Bobby” DeLuca was talking behind his back and called him a rat, St. Laurent immediately sprang into action and began plotting to have DeLuca killed.

In April 2006, St. Laurent met a would-be hitman in a Johnston parking lot and drove into downtown Providence to the Sidebar restaurant on Dorrance Street where DeLuca was working as a kitchen helper as part of his probation. He pointed out the restaurant to the man and offered cash if all went according to plan.

It didn’t, however, as St. Laurent was busted on extortion charges shortly thereafter. Still, bars could not hold back “The Saint” and he began recruiting a hitman from inside prison walls with the help of a fellow inmate. 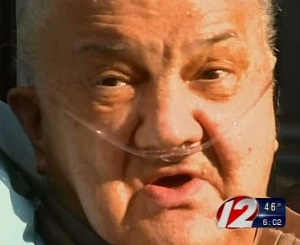 This second plot fell through as well when authorities got in on the action and taped conversations between the elderly mob capo and the inmate. Prosecutors were able to charge St. Laurent with the murder-for-hire plot in 2011, while his intended target, DeLuca, became exactly that what he had publicly accused his former partner of: A government informant – better known in “the life” as a rat.

Seated in a wheelchair and using oxygen, a frail looking St. Laurent (right) admitted to the murder plot, but told the judge his “intention was just to scare Mr. DeLuca.” He conceded that he “made a grave mistake.”

After his release from prison, St. Laurent disappeared from view. He was welcomed home by his wife Dorothy and their son Anthony M. St. Laurent Junior, who both pleaded guilty in 2010 to shaking down several bookmakers in the Taunton, Massachusetts area for more than twenty years on behalf of “The Saint.”

Well, it wasn’t the Sicilian flu. When Boston mobster Anthony “The Saint” St. Laurent was wheeled into court in a wheelchair with oxygen tanks by his side, it was a necessity. Without them he’d die.

We know this, because two weeks after his release from prison, the notorious Mafia captain died of natural causes. Breathing his last breath of fresh air in freedom. When it comes to the mob, that’s a pretty good way to go.