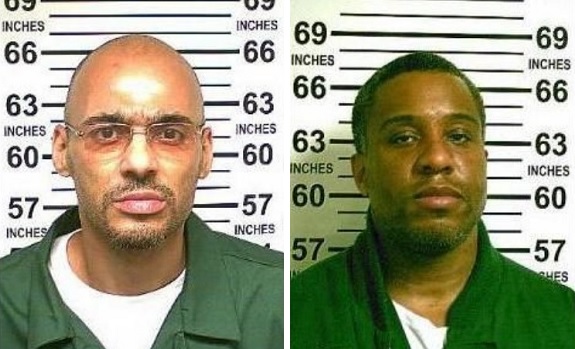 Two high-ranking leaders of the Nine Trey Gangsters set of the United Blood Nation (UBN), including the Godfather, 45-year-old Pedro “Magoo” Gutierrez (left), who also served as Chairman, and 45-year-old James Baxton (right), also known as “Frank White”, who held the rank of Worldwide High, were each sentenced Tuesday to 20 years in prison for racketeering conspiracy.

According to prosecutors, Gutierrez was a Godfather of the Nine Trey Gangsters and had served since 2003 as the Chairman of the council that governs the UBN. Gutierrez, together with James Baxton and Omari Rosero, considered themselves “the last ones that God put in power” over the UBN.

As the Godfather of the set, Gutierrez, along with Baxton, conducted gang business and participated in the distribution of gang dues while incarcerated in the New York State Department of Corrections.

Trial evidence also established that Gutierrez ordered a gang war in North Carolina in 2011, directing that members of the Bloods gang attack and kill members of a renegade gang called Pretty Tony. The war resulted in numerous injuries among inmates and the lockdown of five North Carolina prisons for six months.

As a Worldwide High of the Nine Trey Gangsters, Baxton, while incarcerated in the New York State Department of Corrections, trafficked heroin within the prison system and engaged in wire fraud by threatening the relatives of other incarcerated inmates.

“With today’s sentencings of two violent gang leaders, including the purported Godfather of the Nine Trey Gangsters, law enforcement has delivered yet another devastating blow to the Nine Trey Gangsters and the United Blood Nation,” said Assistant Attorney General Brian Benczkowski. “The defendants committed crimes that spanned the East Coast, including trafficking deadly narcotics in North Carolina and New York and ordering a gang war in North Carolina. As demonstrated by the 61 defendants now adjudicated guilty in this case, when federal, state, and local law enforcement work together in sustained efforts, we can disrupt and erode violent prison and street gangs.”

In all, 61 defendants have been found guilty in this case.