Loose lips sink ships… and mafia families. For over a decade Joseph Ligambi has been credited with returning the dysfunctional Philadelphia La Cosa Nostra family to old world values of secrecy and efficiency. After he replaced Joseph Merlino as boss the juicy news and street gossip dried up. Until now. While Ligambi (right) has kept his mouth shut against police, the FBI, and the media he held nothing back during conversations with his fellow mobsters. Why would he, right? Why wouldn’t he trust a bunch of goodfellas who swore an oath of loyalty towards a criminal organization built on lying, cheating, stealing, and murder? Well, because sometimes goodfellas like to cheat their way out of a heavy prison sentence by wearing a wire on their colleagues. Unfortunately for Ligambi and several other Philly wiseguys: They had no clue.

Last week the Philadelphia Inquirer reported that a federal judge had ruled that many conversations made by Gambino soldier Nicholas “Nicky Skins” Stefanelli could be used against Ligambi and his seven codefendants at their upcoming racketeering trial. This makes the trial, which is scheduled for October, a whole lot more interesting.

Inquirer reporter and mob expert George Anastasia wrote an excellent article on the recordings last week. Painting an image of gossiping mobsters who made fun of broke underlings, one of whom, Ligambi said, “was selling cakes out of the trunk of his car” and was always giving him “a ditty how broke he is.”

Most interesting was what Ligambi and company said about the soon-to-be-released Philly mob boss Joseph Merlino. “Joey sends word,” said Ligambi. Anthony Staino, allegedly one of Ligambi’s most trusted associates and who is also a codefendant, had this to offer about Merlino’s return: “They're going to have a caravan wherever he's at. He sneezes, there'll be five hands giving him a hanky.” 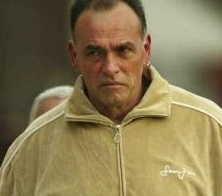 With words like these to corroborate testimony of mob turncoats and FBI surveillance the trial could go very bad for the Philadelphia gangsters. Not to mention that Merlino might has to wipe his nose by himself.

Three members of the Philly mob decided not to go to trial but plead guilty instead. Martin Angelina, Louis Barretta, and Gaeton Lucibello (right) all pleaded guilty to racketeering conspiracy charges. This past Friday, Lucibello was sentenced to 51 months in prison for his participation in a racketeering conspiracy involving extortion and illegal gambling. Angelina will be sentenced in September while Barretta will find out his sentence in November.