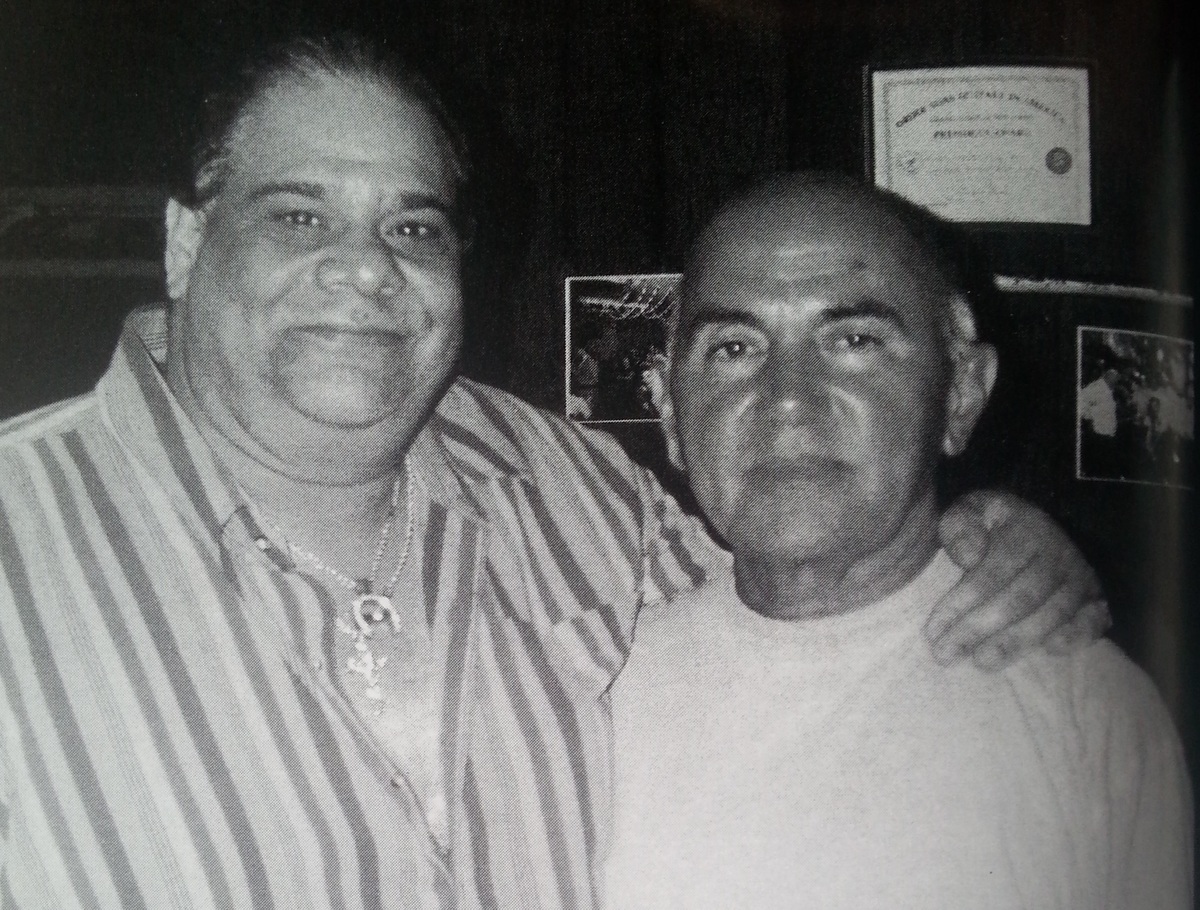 Ralph Natale was proof that the Philadelphia Crime Family was at its end and in deep trouble. Natale would become the first Mafia boss to flip, turn government witness, and testifie against his former 'employees'. But was he really the top guy or just an Uncle Junior type of bulls eye for the feds to aim their guns at?

Ralph Natale started out as an absolute nobody. He wasn't a killer or tough guy and he wasn't a smart street guy either. Natale was the guy who hung around but was never truly part of the crew. Still, the guys he hung around liked his company. One of those guys was Philadelphia Crime boss Angelo "The Gentle Don" Bruno, Bruno got Natale started as a bartender at the Rickshaw Inn in Cherry Hill. Tending bar Natale came into contact with a lot of the lower level guys but never really joined the action. A few years later Natale got

his first big break when Local 170, bartenders union he belonged to, was in chaos. Three of the union leaders who were controlled by Angelo Bruno were arrested and convicted of extortion. Looking for a new union leader Bruno decided that Natale (left) would be the guy who would take out Bruno's orders at the union. As the head of the union Natale diverted hundreds of thousands of dollars from the union's health benefit plans to Bruno. Things were going great for Natale, finally he was a somebody with some power and he wasn't gonna let anybody take that away from him....and so when former Local 170 official Joey McGreal was released from prison and wanted Natale's spot Natale committed his first murder. Well he didn't do it himself, the guy who was with him pulled the trigger for him. Anyway Natale stayed on top as head of the union and after this murder thought he was even more than just a somebody and started getting into other rackets.

One day a lawyer working for Mr. Living Room, which was a furniture store in Marlton New Jersey, approached Natale to help him out with some insurance scam. Natale was asked to firebomb the place and in turn he would receive 25% from the million dollar insurance settlement. Natale firebombed the place but was allready thinking out a plot that would give him the full 100%. Natale contacted a hitman named Charlie Allen and asked him to help him murder a business partner that owed him money. Natale told Allen: "I’m gonna take him down by the waterfront" "I’m gonna dump ’im. That guy’s stealing my fuckin’ money and when somebody gets into my money". We know he said this because Charlie Allen was a police informer who wore a wire at every meeting he had with Natale. Natale had no clue and told Allen all about rackets he was in on, help he needed and more. Natale talked about how he was a no show employee for the largest beer distributorship in Pliladelphia. In 1978 Natale was arrested for the Mr. Living Room arson and convicted a year later. While he was out on bail Natale used Allen (who again was wearing a wire) to sell 4000 Quaaludes and arrange a meeting between his cocaine suppliers and Allen's buyers (who were federal agents working undercover). And so Natale was arrested again in January 1979 and convicted of smuggling cocaine in July 1980.

How Natale dealt with prison is difficult the say, one story (the one he told his associates) was that he was THE man in there and that every group feared him. But all of that seems to be an attempt to impress his associates then the truth. The truth probably was that he didn't get raped. He did say about his life behind bars: "It was like like being inside an x-ray machine. Prison shows you who is a real man, how they handle themselves. You see how they act at Christmas with no family or friends around, locked up like that. You see how they do their time. You see who breaks, who bends and who is a stand-up guy."

Inside Natale eventually shared a cell in Erie County, Pa. with Joseph Merlino (right), a young Philadelphia mobster. Natale found out that the 2 had a lot in common as they both hated the former boss Nicky Scarfo and the way he had run the Philadelphia Crime Family. Merlino hated Scarfo for demoting his father Salvatore "Chuckie" Merlino from Underboss to soldier and Natale was angry when Scarfo grabbed his illegal proceeds and never took care of his family while he was in prison. Natale found he had authority and seniority and with the help of Merlino and his crew of youngsters he could become boss. After a few years Merlino got out and found that Scarfo had been replaced with the Sicilian born John Stanfa. Merlino who after all the talks about leadership with Natale wasn't about to let his plans be stopped by this old Sicilian out of towner and pretty soon Merlino got ready for war.

As Merlino and his group of youngsters were fighting Stanfa and his guys Natale was safe in prison, sometimes calling Merlino to give him some pep talk and promise him that once they would be the leaders things would be great. Easy talk when you're not in the line of fire. After several mobsters on both sides were killed the F.B.I. decided to put a stop on this war and take Stanfa and his crew off the streets. Now Natale and Merlino could take the top positions. In 1995 Natale was released from prison and took the top spot after Merlino (who had become a made guy under Stanfa) made him. Now Natale who never had done any real Mafia work in his gangster life was in the top spot of the Philadelphia Crime Family just after becoming a made guy. He had the backing of the New York Families.

Natale was a happy man but right away things seemed to be not quite as they should've been. Merlino continued to act as he had done under Stanfa. Eventhough Natale was boss and as such the guy who said how things had to go he realized that a lot of stuf was done without talking to him first. People were getting whacked without Natale's permission and there was more and more proof that Merlino was running his own organization. One former Natale associate said: "They tried to leave Ralph out," "But he knew. People would drop money or other things off for Joey but Joey wouldn’t be there and Ralph was. So Ralph would say, ‘I’ll hold onto it.’ Then he’d check it out and find money or something from a scheme nobody had told him about. This was about 1995, less than a year in his position, that Natale began to suspect Merlino and his friends were very disloyal. They were cutting him out of deals and going behind his back to make money. Natale was letting them get comfortable and bury themselves." His former associates also say that Stanfa was planning on taking the whole Merlino crew out with the help of a North Jersey crew ran by Pete Caprio.

Because he was left out of business deals Natale (right) probably really needed more money for his girlfriend (besides his wife), so Natale decided to sell some drugs by himself to make that extra bit Merlino was holding him out on. Acting all by himself out of touch with current events it didn't take the feds long to arrest Natale. Looking at 20 to life and with nothing but hate towards Merlino and his crew Natale decided to save his own skin and burn theirs by becoming a government witness and testifie against his former Family. The first Mafia boss to ever turn on his own Family.

After word got out that Natale had flipped people began to leak stories to the press that Natale knew nothing, that he was nothing but a puppet on a string and that he was kept out of all the major business. They also said that he was never formally inducted but that he bought his way into La Cosa Nostra. This may all be and they try to put Natale down but he had them tricked first when he made them fight his war. And now that he has flipped he seems to have tricked them all again because in 10 years from now Natale will be living somewhere in freedom where they will be either dead, in prison or on their way to prison. The whole situation just shows how fucked up the situation in the Philadelphia Crime Family really is.

On January 21, 2005 Ralph Natale was sentenced to 13 years in prison for drug dealing, racketeering and bribery. Before he decided to cooperate with authorities he was facing life in prison. He will serve no more than 8 years because of time already spent in prison.

After his release from prison, Natale wrote a book about his life titled Last Don Standing, which we discuss here. He passed away January 23, 2022 at age 86.