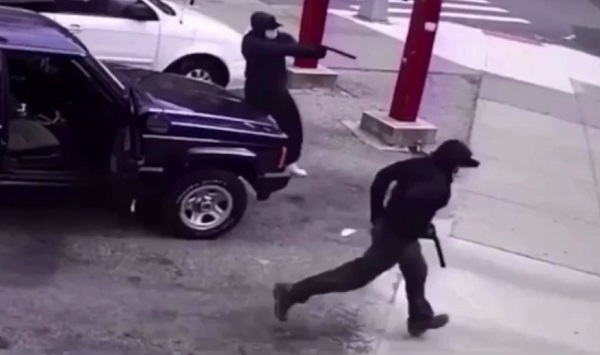 It was a gangland hit like something out of an episode of television series Sons of Anarchy. In the middle of the day, in broad daylight, on a street in the Bronx, New York, two gunmen dressed in black, armed with pistols with silencers, shoot and kill Frank Rosado, the leader of the Pagans Motorcycle Club. On Tuesday, two Hells Angels and another outlaw biker were charged with this brazen murder.

The assassins were caught on security camera and plastered all over the frontpages and primetime news channels. 51-year-old Rosado was killed by a bullet to the head and one to the chest. He was targeted because he was the president of the Bronx chapter of the Pagans outlaw motorcycle club.

On Tuesday, three men were arrested for their role in the gangland murder. They include two Hells Angels: 58-year-old Frank Tatulli and 29-year-old Sayanon “Andy” Thongthawath; and 27-year-old Anthony Destefano, who is a member of the Satan’s Soldiers gang, which is considered an affiliate club of the Hells Angels.

The three men were charged on Wednesday with second-degree murder, manslaughter and criminal possession of a weapon.

The motive behind the slaying, according to police investigators, was revenge after the Pagans shot up the Bronx clubhouse of the Hells Angels on January 2. The Angels moved there after selling their headquarters in Manhattan for around $8 million dollars.

“The Hells Angels moved from Manhattan to the Bronx,” Lt. William S. O’Toole, the commander of the Police Department’s Bronx Homicide Squad told the New York Times. “So the Pagans want to show them, ‘We’re the Bronx Pagans. We’re the motorcycle club.’”

If these charges turn out to be true, then it seems the Hells Angels replied with a clear and deadly: “No. No, you are not.”