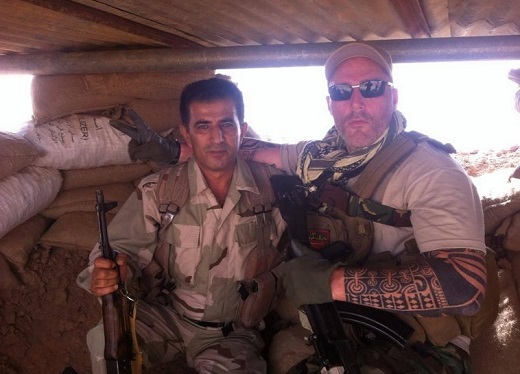 Three members of an outlaw motorcycle gang are currently in Iraq to fight terrorist organization Islamic State, also known as ISIS, ISIL or IS. The three men are “stationed” in Mosul and fighting alongside the Kurds. Wars are raging throughout the Middle East and attract not just religious terrorists, but bikers and gangsters as well.

A video showing one of the outlaw bikers being interviewed by Kurdish reporters surfaced on the internet, recently. In it, the man, sporting an arm tattoo and military gear, says that, “the Kurds have long been oppressed.”

In the hours and days since, there was a lot of speculation about the man’s identity. All the rumors were put to rest when the president of Dutch outlaw motorcycle club No Surrender, revealed that three of his men were currently fighting in Iraq against ISIS. No Surrender MC president Klaas Otto said the three men had gone to Iraq to fight injustice.

No Surrender MC is one of the Netherlands’ biggest outlaw biker clubs with membership numbers that rival the Dutch Hells Angels. The club was founded in 2013 by Klaas Otto. They became notorious for making several well-known Dutch gangsters prominent members, including Willem Holleeder, the man behind the kidnapping of beer tycoon Freddy Heineken, and Willem van Boxtel, founder and former president of the Dutch Hells Angels who was kicked out of the club.

A photo of the No Surrender fighter was later posted on a Twitter account run by Dutch Kurds. The text accompanying the picture is very clear: “Ron from The Netherlands has joined the Kurds to exterminate the rodents of IS.”

The wars in the Middle East are attracting a wide variety of people with all sorts of motives. Young men from all over Europe, the United States, and as far away as Australia have joined up with terrorist groups in Syria and Iraq. Some of them did so to fight dictator Bashar al-Assad, others to fight the West and establish an Islamic State. In turn, mercenaries and Westerners joined up to wage war against ISIS, which is seen as the world’s premier terrorist threat.

The three members of No Surrender MC are the first documented outlaw bikers involved in the wars, though they are by no means the first men with shady connections or an – alleged - criminal background. 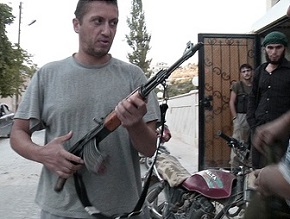 This summer, a documentary showed how a Danish gang boss joined the fight against Assad. “On the streets of Copenhagen he is known as Big A, a convicted drug trafficker and the leader of one of Denmark's most notorious organized crime gangs. But on the frontline in northern Syria, Abderozzak Benarabe (left) is just another have-a-go jihadi, a man who joined the fight against Bashar al-Assad through a mix of restlessness, curiosity and a need for some kind of personal redemption,” British newspaper The Guardian reported.

Benarabe, though, remained a gangster first and foremost. When there were rumors rival gangsters planned to move in on his territory, he was back in Denmark faster than you can say “Islamic State.”

The director of the documentary about Benarabe writes, “[The gang boss] is proud of what he's done in Syria, and still talks of being religious, but he says his loyalties to his gang have superseded anything else. ‘These are my brothers, the people I grew up with, and when they need me I must do whatever I can for them.’”