Spain is a favorite among European tourists. The weather is sunny and warm, and the cities and nature are beautiful. Teens go to the coastal cities to party long and hard. While the more mature tourists visit the cultural spots of Madrid. Spain has something for everybody. And these past forty years it has attracted one particular group with ever increasing success.

Spain has become a hot spot for the criminal elite. Rich criminals from Italy, Britain, The Netherlands, South America, and Russia have all flown in throughout the years to either enjoy their retirement, or expand their criminal empire. Spain has become the most important entry point for South American cocaine. And due to corrupt officials criminal groups are very successful in laundering their ill gotten money through banks, real estate, and construction projects.

The Losers Arrive In Spain

One of the more interersting new settlers was the Sicilian Grado Clan. The Grado Clan consisted of the five brothers: Vincenzo, Salvatore, Gaetano, Giacomo, and Antonio. They were all members of the Santa Maria di Gesu mafia family, and among the biggest heroin traffickers within the Sicilian Mafia.

The Grado brothers bought their morfine from Syrian national Wakkas Salah Al Din, who in turn worked for the Turkish mafia family Cil, one of the biggest crime families in Istanbul. Every two or three weeks a shipment of at least fifty kilos of raw morfine arrived in Italy. The morfine was refined in Sicily, and then shipped to the US. Heroin trafficking made the Grado Clan very wealthy. They owned mansions all over Italy, companies in Turkey, and had richly filled bank accounts in Switzerland.

But their success made certain people very jealous. Chief among them the bosses of the Corleonesi, led by Luciano Liggio and Toto Riina. In 1981 a war erupted between the Corleonesi and its supporters and the other Palermo Families. The Grado brothers belonged to the Santa Maria di Gesu family, which was led by Stefano Bontate. Bontate was killed by the Corleonesi and the Grado Clan had vowed its loyalty to his successor. This angered the Corleonesi who put the Grado Clan on their death list. Antonio Grado always had another mafioso with him for protection, but the killers of the Corleonesi managed to kill him nonetheless. The rest of the Grado Clan saw they were losing the war and made arrangements to flee Sicily.

Rodolfo Azzoli was a successful businessman who worked for the Grado Clan as their front man. He invested their money in real estate. In 1979 he had moved to Benidorm, a popular Spanish coastal city, where he bought the Sierra Dorado Hotel. After the murder of Antonio Grado the entire clan got together and meticiously planned their move to Spain. They too would settle in Benidorm. On a cold December day a procession of limousines arrived at the Sierra Dorado Hotel. The four remaining Grado brothers were the first to enter the hotel, followed by forty people, thev wives and children, and soldiers and associates of the clan. After several days the entire clan moved to luxurious apartments from where they continued their criminal business.

In the spring of 1982 they started a construction company which would build villas along the coast between Benidorm and Allicante. On the board of directors were Rodolfo Azzoli, a businessman from Milan, a member of the Italian Social Democratic party, and the Italian minister of Public Works Franco Nicolazzi. Quite a bunch!

After a while the Grado Clan moved to the smaller town of Altea. The oldest brother Gaetano went back to Sicily to fight the Corleonesi. After having bragged about a hit on a wiretap he was arrested in a villa filled with fire arms and sent to prison.

The Grado Clan showed how easy it was for a criminal gang to establish a base in Spain and launder their drug money. In the decades that followed it seemed the sky was the limit. The construction business was booming. The coastal area named Costa Del Sol pretty soon received the nickname Costa Del Crime because of all the criminals living or operating there.
The Russians Also Like To Spend Some Money In The Sun 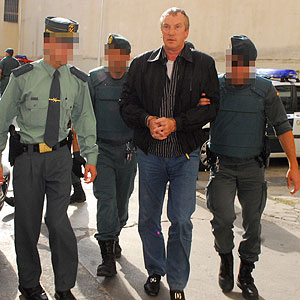 In the past twenty years Eastern European crime groups have become wealthier and more powerful. Back home some men are so powerful that they have risen to be labeled legit businessman, be it with a shady past. Several Russian criminal groups have established bases in Spain where they launder their criminal money made back home.

The Spanish climate used to be very nice for these groups, but Spanish authorities are starting to see that having the biggest crime bosses from around the world invest billions of euros in your economy isn't a good thing.

On Friday the 13th of June 2008 more than three hundred police officers raided several locations throughout Spain. Twenty men were arrested. $307,000 in cash and twenty three luxury cars (Ferraris and Bentleys) were seized. Bank accounts totalling €12 million euro were frozen. The group was led by Gennadios Petrov (photo on the right), who is the reputed boss of the Tambovskaya-Malyshevkaya organization, said to be one of Russia's most brutal crime groups. Petrov came to Spain in the early 1990s and allegedly used cash from the former KGB and communist party to buy a luxury hotel in Mallorca. Very similar to how the Grado Clan got their start.

Petrov lived in enormous luxury. He owned a mansion worth €20 million, and was known to hand out tips of €500. His neighbor was the sister of King Juan Carlos of Spain. But it is unsure if he will ever get to enjoy his fabulous life in the sun again. He is charged with a variety of offences including money laundering, murder, extortion, drug dealing, illicit association, falsification of documents and tax fraud.

With Spanish authorities finally cleaning up their cities the only question is: are they on time? Criminal gangs have already invested billions. And there are so many gangs, from so many different countries. Whatever the outcome Spanish police are showing they mean business. Petrov is a big boss, and someone who usually manages to stay out of the arms of police. But now he and his gang are sitting in a Spanish prison. A place that is even hotter than the Spanish beaches.