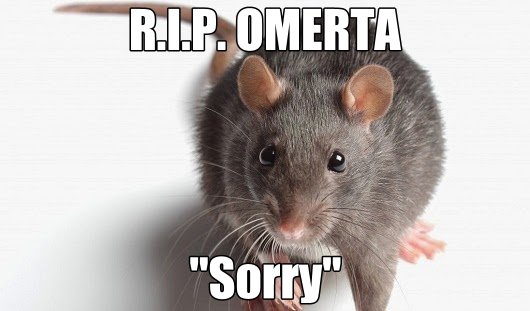 The writing has been on the wall for decades now, but with these numbers Gangsters Inc. is officially declaring Omerta, the Italian code of silence, deceased. It sleeps with the fishes. It got whacked by backstabbing gangsters who either gave underlings no other option but suicide or becoming an informant and by mobsters who were so devious that they murdered and thieved their way to the top only to flip on everyone else once they were facing time behind bars.

Hollywood did a great job at keeping the myth of Omerta alive. Movies such as The Godfather emphasized the Mafia’s members adhering to a strict code of honor and ethics. Though it also showed members breaking those same rules these men were usually dealt with in typical violent mob fashion by the end of the movie. We all know Henry Hill wasn’t really happy by the end of Goodfellas. If only he hadn’t become a rat. It’s a message Hollywood kept delivering movie after movie. But in the end reality snuck up from behind and fired two bullets behind Hollywood’s right ear.

Being a stand up guy is what matters most in the world of Cosa Nostra. There is no doubt about that. Being a man others can depend on to remain silent, someone who would rather do life in prison than rat on his friends is seen as the most honorable thing you can be in “the life.”

Yet the truth is that the Mafia is filled with liars, thieves, murderers, and backstabbers. When men have done these things throughout life, how can they be trusted to keep their mouth shut? When your entire life is a hustle you won’t stop hustling when you're facing 25 to life in prison.

Still, there are plenty of men who remain loyal to Omerta. We even listed our top five American mobsters who’d rather die than rat. But the numbers don’t lie. Omerta is dead. If there are any naïve Mafiosi left who think they can trust their colleagues they should seriously think again before they end up with lead poisoning or sharing a cell with Bubba.