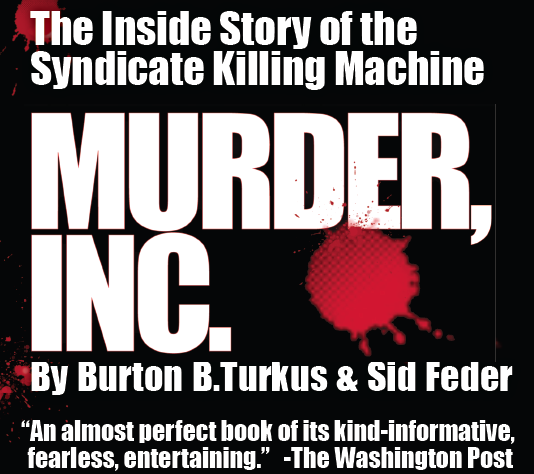 I was first introduced to Murder Incorporated, by Nicholas Pileggi, the extraordinary journalist, author and screenwriter responsible for two of the most iconic works in the literature of organized crime: Wiseguy, which he adapted into the film Goodfellas and Casino which he also brought to the screen with Martin Scorsese. Along with Mario Puzo’s The Godfather (Parts I & II) directed by Francis Ford Coppola, the Pileggi-Scorsese collaborations stand as a kind of filmic Blessed Trinity which help us to understand the underworld association that J. Edgar Hoover called La Cosa Nostra.

But long before the New York “five families” took shape in their present configurations: Gambino, Genovese, Colombo, Lucchese and Bonnano, there was an organization of Italian and Jewish gangsters which the newspapers of the 1940’s branded “The Syndicate.” It was criminal enterprise dominated by Charles “Lucky” Luciano, Meyer Lansky, Albert Anastasia, Benjamin “Bugsy” Siegel, Joe Adonis and Louis “Lepke Buchalter – an informal “board of directors” known as “The Big Six.”

Identifying themselves as “The Combination,” this axis of Jewish and Italian gangsters who associated above and apart from the traditional rules of The Mafia, reaped millions of dollars a year in the post-Prohibition decades from gambling, labor racketeering, extortion, prostitution and dope peddling, but their most lethal product was homicide.

Operating out of Midnight Rose’s, a candy story under the El tracks on the corner of Saratoga and Livonia Avenues in 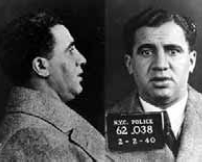 Brownsville, Brooklyn, “Murder, Inc..” as it was dubbed by World-Telegram reporter Harry Feeney, was a twenty-four hour a day racket that killed more than a thousand people from coast to coast during the 1930’s and early ‘40’s.

Located less than two miles from Ebbets Field where the Dodgers played, the candy store was dominated by Abe “Kid Twist” Reles (photo left) – so named for his skill at strangling victims. There was a pay phone in the back of the story and when a “contract” was called in, the killers, designated by Reles, would be dispatched with a doctor’s bag containing the three possible weapons of choice: a gun, an ice pick and a garrote.

TAKING MOTIVE OUT OF MURDER

Like traveling salesmen, the killers would then hop on a train and ride to the destination, which was typically a city in the Midwest or South. On arrival they would “case” the victim, do the job and be back on the train before the police had time to put a chalk mark on the ground. Naturally, the “contractor” who had first placed the call, would have an ironclad alibi for the time of the extermination. With this heinous but brilliant scheme, Reles and his “Brownsville Boys” took motive out of the murder equation.

The crew of rubout specialists was as colorful a gang as ever wielded an ice pick. There was Vito Gurino, an apelike torpedo who practiced sharp-shooting by blasting the heads off chickens; Buggsy Goldstein, Dasher Abandando and Happy Maione, named for the permanent grimace that always crossed his face.

The senior shooter was Harry “Pittsburgh Phil” Strauss, a handsome clothes horse who killed more than thirty men in a dozen cities. But the beetle-browed Reles was the boss of the enterprise and no one outside the underworld had a clue to the bloodthirsty “death on demand” racket he ran until he was ultimately arrested and turned by Burton B. Turkus.

A former defense lawyer with the suave looks of Errol Flynn, the courtroom manner of William Powel and a steel-trap legal mind, Turkus agreed to go to work for Brooklyn D.A. William O’Dwyer, a former judge, after a string of 200 unsolved murders piled up in Kings County. Quickly assembling a crack team of lawyers and detectives, Turkus turned up the heat and eventually “flipped” Kid Twist into the most famous mob “canary” in history – that is until Joseph Valachi “sang” to the McClellan committee twenty years later. Turkus was astonished to learn from Reles that those 200 homicides were just the tip of the “ice pick,” so to speak, and that under the direction of the “Big Six,” motivated primarily by Lepke Buchalter – another 800 bodies were scattered nationwide – all linked back to Midnight Rose’s and The Brownsville Boys. But how Turkus ultimately nailed Lepke is a roller coaster ride of ups and downs.

On the eve of his testimony against Buchalter for the murder of garment district owner Joseph Rosen, Reles, who had been protected in “The Squealer’s Suite” of the Half Moon Hotel on Coney Island, was thrown to his death. Although corrupt police officers later claimed that he slipped during an escape attempt, the evidence clearly pointed to homicide and Reles was forever known as “The Canary Who Sang But Didn’t Know How to Fly.” (Photo right)

The page-turning story of how Turkus recovered from that setback and eventually sent Lepke to the electric chair in Sing Sing – the first and only mob boss in history to die in a government execution – was chronicled by Sid Feder, a former war correspondent who spent 17 years as a veteran reporter for the Associated Press. 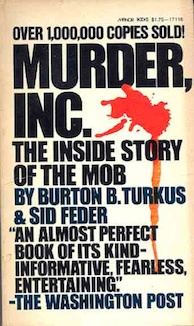 Told in Turkus’s own first-person voice, Murder, Inc, The Story of The Syndicate, was first published by Farrar, Strauss & Young in 1951 and quickly became a runaway best seller worldwide. It was adapted into a film in 1961 which starred Peter Falk in his debut role as Reles and by 1974 “Murder, Inc.” had sold more than a million copies. Meanwhile, Burton Turkus went onto become one of the most successful labor negotiators in New York history.

I had done a number of organized crime-related stories in my days as an investigative correspondent for ABC News, but had never touched on Murder, Inc. Then in 1998 when Nick Pileggi began collaborating with Michael King (of King World) to adapt the Turkus-Feder book as an NBC mini-series I was hired to write the six hours of teleplays.

Devouring both the book and hundreds of Murder Incorporated news clips that Nick had obtained, I ended up turning in seven hours of material. But at the time, NBC decided to get out of the mini-series business so the scripts remained un-produced.

You can buy Murder Inc. as an ebook at Amazon.com or as a trade paperback at createspace.com.

Also be sure to check out author Peter Lance's website where you can read about his books and projects.