Never rat on your friends, but if you do, you better not lie to the feds. That’s the lesson former Boston Mafia boss Francis “Cadillac Frank” Salemme learned yesterday when he was sentenced to life in prison for a 1993 murder he forgot to mention when he decided to cooperate with the FBI.

Perhaps Salemme just didn’t prioritize murder the same way most people do. Coming up through the ranks of the Boston underworld, he made no qualms about ending lives. He was an enthusiastic participant in the Irish gang wars that ravaged the city in the 1960s. Fighting for the Winter Hill gang, he killed eight rival gangsters.

But as an Italian, his ultimate loyalty lay with the Italian Mafia, La Cosa Nostra, and he became a trusted hitman for mob boss Raymond Patriarca, who headed the New England crime family. Trusted, but not family. Because Salemme was of mixed heritage – his mother was Irish – Patriarca did not allow him to become a made member.

That is not to say Salemme tried his best to earn his boss’ approval. He earned a reputation for being a stand-up guy when he was sentenced to 16 years in prison in the 1970s for his involvement in the bombing of John Fitzgerald, who was the lawyer of Boston hitman-turned-government witness Joseph Barboza.

Once he got out, he looked forward to capitalizing on his hard-won credibility. His murderous actions during the Irish gang wars had already earned Salemme the respect of infamous Irish crime boss James “Whitey” Bulger. The two men forged a bond during the 1960s that helped Salemme become the leader of the Patriarca crime family when the 1990s came around.

After the FBI seriously weakened the Patriarca family when it imprisoned boss Jerry Angiulo in 1986, Salemme began plotting his ascension. With Angiulo gone, his former underlings began vying for the top position. Violence broke out among various factions and Salemme was shot and wounded in 1989 outside an IHOP restaurant. 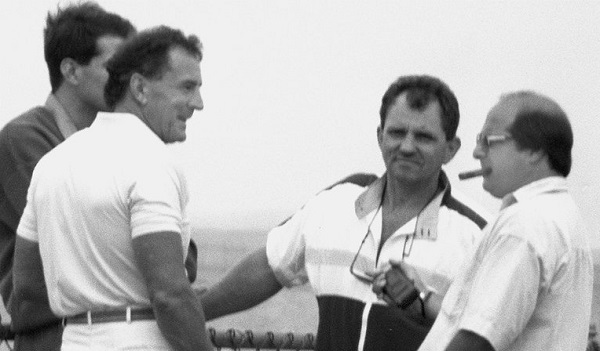 He survived and with the help of an intervention by New York mob boss John Gotti, who brokered a peace deal between the warring factions, and the backing of Whitey Bulger, Salemme became the man in charge of the Boston Mafia.

His reign was short-lived, and he and Bulger were indicted in 1995 and charged with racketeering. A jury convicted Salemme and he was sentenced to 11 years behind bars. While inside, he learned that his trusted Irish pal was anything but the man he thought he knew.

The man feared on the streets for his cunningness and deadly capabilities had been working as an FBI informant for several decades. As details of Bulger’s betrayal surfaced, Whitey was nowhere to be found. On the lam, he was placed on America’s Most Wanted list and wouldn’t be caught until 2011.

Salemme, meanwhile, had second thoughts about his criminal career and the rules he lived by. Omerta was great and all if everyone abided by it. But if they didn’t, why would he have to be the one going down?

So, in 1999, he became a government witness and cooperated with the FBI. As a turncoat he had to tell authorities about all the crimes he committed. If he lied, they would throw his deal in the garbage bin and lock him up for life.

Salemme talked and snitched to save his skin. It worked. He was rewarded with a release from prison and vanished to spend the rest of his life in the federal witness protection program. All was well until the feds realized he had lied to them when Stephen “The Rifleman” Flemmi, Salemme’s former friend and Bulger’s right-hand man, told them about a 1993 murder.

In the early 1990s, Salemme and his son Francis Jr. had a financial interest in a South Boston night club known as “The Channel,” which was managed by Steven DiSarro. As a federal investigation was narrowing in on the Salemmes, DiSarro’s connection to the mob boss was discovered and he was approached by federal investigators to cooperate.

When Salemme found out, he had his son murder DiSarro on May 10, 1993, in Salemme’s own residence. Salemme watched as his son Francis Jr. fatally strangled the nightclub owner, while mob associate Paul Weadick held his legs. Salemme then ordered the body transported to Providence, R.I., and buried.

In March of 2016, DiSarro’s remains were recovered by federal authorities behind a mill in Providence, R.I. Frank Salemme Junior had already passed away in 1995 from lymphoma.

Salemme hadn’t told the feds this story and it cost him big time. He pleaded guilty to obstruction of justice charges in 2008 and was sentenced to five years in prison. But authorities weren’t quite finished and, in 2016, charged him with the murder of DiSarro as well. On June 22, 2018, Salemme and Weadick were convicted by a federal jury of one count of murder of a federal witness.

On September 13, 25 years after watching his son strangle the life out of a man he thought would snitch, 85-year-old Salemme was sentenced to life in prison. Weadick, now 63, will also spend the rest of his life in a cell.

Disarro’s son, Michael, was present at the sentencing hearing and said the following to Salemme: “What makes this ironic is that you killed our father for thinking he was going to rat and become a snitch. When actually Mr. Salemme, you ended up being the snitch and going into protective custody. You are a coward and a murderer, and I am happy to see you will be spending what days you have left in a cell.”