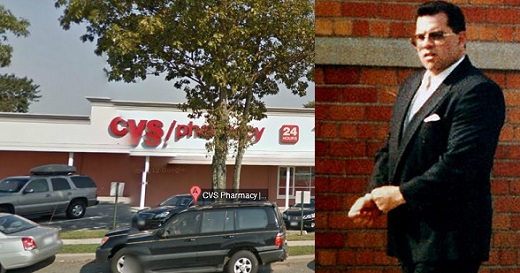 Just when I thought I was out they pull me back in…? After having spent the last couple of years living in relative anonymity, former Gambino mob boss John “Junior” Gotti is back on the front pages of New York City’s tabloids. The reason is typical of the lifestyle he claims to have said farewell. He was stabbed in a parking lot.

Details are still scarce, but yesterday the New York Daily News reported that Gotti claimed “he was stabbed in the stomach while trying to break up a fight between two strangers in the parking lot of a CVS store in Syosset on Sunday.”

For those mob fanatics worried Junior broke the code of silence, no need. After Junior Gotti arrived at the hospital to treat his wounds, personnel there called the police due to the nature of the wound. When cops questioned Gotti about the incident they were met by the type of stonewalling the Gotti family is (in)famous for. “He wasn’t very cooperative,” one investigator told the New York Daily News.

The CVS Pharmacy store on Long Island is located near Junior Gotti’s home and thus isn’t an unusual place for him to be at. But breaking up a fight between two strangers? His father would’ve probably let the strangers sort out their beef like real men do. Perhaps take a few bets from bystanders. But step in and go John Lennon on them? I never met John Gotti Sr. but it just does not sound like the man we came to know via wiretaps, testimony, and books.

I could very well be wrong though.

His son has made a successful break from the mob after all. It was his main defense when prosecutors tried him four separate times on racketeering charges and each time the jury could not reach a decision. The government may have had a big hard on for the Gottis, but after four mistrials they decided to call it quits and let Junior live out the remainder of his life as he wished.

Since then Junior has been quiet. And he’s certainly not behaved like he did as a young tough in the 1980s when he went clubbing around New York City while invoking the notorious reputation of his father. And, when that didn’t work, allegedly resorting to violence by stabbing another partygoer to death during a bar fight in 1983.

That incident from decades ago now sneaks its way back to the forefront as authorities look for answers regarding the stabbing of Junior this past Sunday.

Was it pay back for something Junior did, or had ordered done, years earlier when he ruled the Gambino crime family? Or was it just two strangers who didn’t take too kindly to a good Samaritan trying to get them to make peace?

Whatever the case, the year isn’t 1983. It’s 2013 and the NSA is monitoring everything we do. No doubt CVS Pharmacy is monitoring its parking lot with a few cameras that might be able to give more information as to what happened. If not, maybe a drone was flying overhead?

If Omerta continues to hold up those might be our only options.