Toronto’s crack-smoking mayor Rob Ford is hoping he can salvage what’s left of his political career by wooing the citizens of his city with enthusiastic public appearances. Those include plenty of photo-ops, even with the Hells Angels. Another dumb move by Ford, but for the most prominent biker club in the world it’s yet another smart play in the fight for public sympathy.

The photo (above) was taken after a Buffalo Bills game and shows full patch Hells Angels Nick and Adam of the Westridge Alberta chapter and Cory, who is a prospect of the Toronto chapter, throwing their arms around the disgraced-but-more-popular-than-ever mayor as they pose for the camera. Hells Angel Nick has a shiny chain with the club’s Skull and Wings logo hanging from his neck.

And if it wasn’t clear enough, the Toronto Hells Angels also posted the photo on their homepage. Toronto mayor Rob Ford smiling surrounded by Hells Angels, the photo immediately went viral and many news outlets reported the chance encounter.

Because, after all, it was a chance encounter. Rob Ford, the drunk, crack-smoking mayor who hurls profanities during press conferences, has been posing for pictures his entire career and since his crack use became public everyone and their mother wants to share some space with him. Who could blame him for not knowing these guys were Hells Angels? Nobody, right?

Except, of course, Ford himself. The Toronto Sun reported that back in 2002, then-councilor Ford was critical of former mayor Mel Lastman for shaking the hand of a Hells Angel and having his picture taken. Ford even went as far as saying: “I’m sure he does it purposely,” referring to the photo. “What else could it be? You can’t be that dumb.”

But enough about Ford.

The Hells Angels have quite an infamous reputation in Canada. As biker expert and author Julian Sher told Gangsters Inc.: “Since their crimes were exposed, the attitude in Canada more than in any other country in the world has changed. Most people, most journalists, when there’s a news story and I get interviewed the starting point for most people in Canada is that the Hells Angels are criminals. That not all of them may be criminals but that it’s a criminal gang and that they do bad things. They are not seen as the heroes, as the rebels, that they are in many places in Europe and in the United States. Ten to fifteen years ago the Hells Angels had the same image in Canada they had elsewhere. An image of bad boys, lovable rascals, interesting rebels. Because of the murders they committed, the exposures we did as investigative journalists, the good police work, including public education, the public’s attitude began to change.”

And that’s a problem for these freewheeling outlaws. Because once the public begins to complain, police start to investigate. The Hells Angels have always been very aware of the public and, subsequently, of the influence the media has on the masses.

Founded on March 17, 1948, in the Fontana/San Bernardino area in the United States, the Hells Angels quickly gained a reputation as fearless brawlers who would cruise through towns and leave them in ruins. Back then they were all about booze, drugs, sex, rock & roll, and riding their motorcycles. The fights were a perk that came with the life.

Stories about intoxicated Hells Angels wrecking bars or appearing in court charged with rape became common and both the media and the public had, as famed author Hunter S. Thompson wrote, firmly established the Hells Angels as All-American bogeymen.

Thompson (Fear and Loathing in Las Vegas) spent some time with the Angels during the mid-sixties. He was present at a time when they became a media hype. His 1966 book “Hell’s Angels” offers us an intimate view inside the club as its members try their hand at media manipulation for the first time.

“Besides appearing in hundreds of wire-serviced newspapers and a half-dozen magazines, they posed for television cameramen and answered questions on radio call-in shows,” Thompson writes. “They issued statements to the Press, appeared at various rallies and bargained with Hollywood narks and magazine editors. They were sought out by mystics and poets, cheered on by student rebels and invited to parties given by liberals and intellectuals. The whole thing was very weird, and it had a profound effect on the handful of Angels still wearing the colors. They developed a prima-donna complex, demanding cash contributions (to confound the Internal Revenue Service) in return for photos and interviews.”

Thompson recounts how one man claimed to represent the Hells Angels and offered media opportunities to interview or photograph members of the club for prices ranging from $500 to $1,000 dollars. He dismisses that the man ever was an official representative, but does say that it was this guy who came up with the idea of getting paid for interviews and, more importantly, cash in on the hype by selling Hells Angels Fan Club T-shirts. 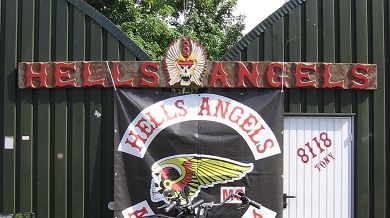 Demand for such shirts was quite high until Angels decided to rip the shirts off the back from anyone wearing one. They did not appreciate their name and logo being smudged like that.

Almost fifty years later, the club has adjusted its attitude towards regular citizens wearing its logo, but it remains aggressive when it comes to those that use it without permission. As a recent article in The New York Times showed: “Just in the past seven years, the Hells Angels have brought more than a dozen cases in federal court, alleging infringement on apparel, jewelry, posters and yo-yos. The group has also challenged Internet domain names and a Hollywood movie — all for borrowing the motorcycle club’s name and insignias. The defendants have been large, well-known corporations like Toys “R” Us, Alexander McQueen, Amazon, Saks, Zappos, Walt Disney and Marvel Comics. And they have included a rapper’s clothing company, Dillard’s and a teenage girl who was selling embroidered patches on eBay with a design resembling the group’s “Death Head” logo.”

And they have expanded significantly, “over the years, the group collectively made a leap from image to brand, becoming a recognizable marque and promoting itself on items as varied as T-shirts, coffee mugs and women’s yoga pants. Sonny Barger, 75, the longtime Hells Angels leader, at times has offered his own online bazaar of goods that bear his name: sunglasses, bottles of cabernet sauvignon and books he has written.”

In Toronto’s East End the Hells Angels even have their own fan shop where they sell clothing, coffee mugs, lighters, etc. etc. All products feature the Hells Angels’ logo, colors, and/or number “81” which stands for “HA”, or Hells Angels.

They have also perfected their communications department. Chapters around the world frequently give journalists an “all-access” look behind the scenes to show they have nothing to hide and are of no threat. 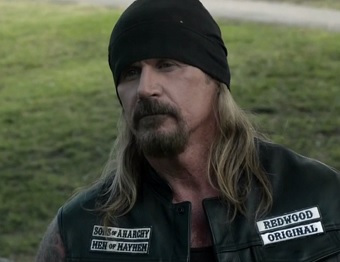 A few American Hells Angels even got themselves some nice acting gigs. Hit television series Sons of Anarchy saw guest appearances by a couple of Angels. Rusty Coones (right) can be seen this season, while former New York Angel Chuck Zito had a guest role in a couple of episodes. Even the club’s founder, Sonny Barger, made an appearance in which he had a few lines.

The acting and store can both be seen in the same light. Sure, it gets the club (and these individual members) some nice legitimate cash, but, more importantly, it improves their image in the eyes of the public. As a neighbor of the Hells Angels store in Toronto told The Star newspaper, “It keeps the neighborhood safer.”

Can you imagine a gang like the Bloods or Crips opening a fan shop? People would not stand for it. Yet, when biker gangs do it, they kind of shrug it off. The reason for that is that Crips and Bloods are undeniably criminal gangs, whereas biker gangs like the Hells Angels are operating in the grey area between rebelling against society and outright criminal.

Of course, the Hells Angels will say their club is not a criminal gang. It is one filled with motorcycle enthusiasts. Many courts around the world agree with that assertion and have turned down prosecutors’ requests to label the club a criminal organization.

This creates a very thin line within which the Hells Angels can operate as they do. Behaving at times like a criminal gang, committing murder and racketeering acts, while behaving like a motor club the next, selling coffee mugs and doing photo-ops with fans or doped-up mayors.

Law-abiding citizens are left with options. They can easily defend their contact with these groups if they only focus on their good side and ignore the bad. If that doesn’t work they can always claim stupidity as to not knowing of their criminal reputation.

The thin line quickly vanishes altogether, though. They might not be a criminal organization per se, but they do have an unusual high percentage of members who are or have been involved in criminal acts. In a club that claims to be a brotherhood in which a strike against one member is a strike against them all that could become a problem.

When one member is extorting a bar owner or conducting a drug deal it is clear he has the backing of his club. No matter what he’s doing. They have his back. Those are the rules. And any victim will know that. 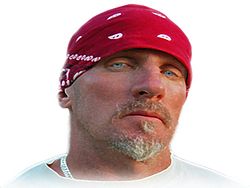 ATF agent Jay Dobyns (left) infiltrated the Hells Angels as an undercover agent and wrote a book about his experiences. He is very clear about this issue. “If members want to wear clothing that identifies them as a part of an ‘organization’ that is involved in murder, rape, drug trafficking, extortion, etc., then the actions of one affect the reputation of all,” he states without hesitation. “It is not like these ‘clubs’ kick out someone convicted of a murder. Instead they embrace that person, honor that person, hold them in the highest esteem and maintain a position in the ‘club’ for their return to society after incarceration often with an elevated status. What ‘club’ conducts business like that? They don't, gangs do. If a Hells Angel in any part of the world is involved in a violent event, every other member of that club/gang who wears the colors benefits from that event in the manner of reputation, intimidation, even if not personally involved.”

You cannot be an outlaw without breaking the rules. You cannot be the baddest club on the block without fighting off the competition. And that is where the problem lies. That is why law enforcement will always keep an eye on these groups. Sooner rather than later shit will hit the fan. They may try to present themselves as honorable rebels, their crimes speak volumes. Convictions and ongoing in-depth reporting on criminal activity will make the public see right through their act. No matter how many favorable media gigs they score.