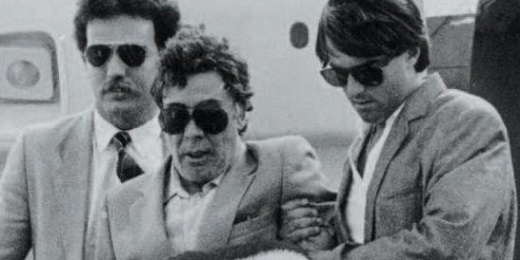 Tommaso Buscetta was the first boss of the Sicilian Mafia to break omerta and tell authorities (almost) all he knew about the secretive criminal brotherhood. Now, Italian filmmakers will produce a big-budget film to tell the story of his life and how he became The Traitor.

That, by the way, is also the movie’s working title. “The Traitor” will be a high-profile project with shooting taking place across the world in Italy, Brazil, and the United States. Italian director Marco Bellocchio will pen the screenplay.

“I am interested in Buscetta’s character because he is a traitor,” Bellocchio told Variety. But, he added, in actuality it wasn’t Buscetta who betrayed the ‘sacred’ principles of Cosa Nostra. “It was [then Cosa Nostra boss] Totò Riina and the Corleonesi Clan.”

This view is one that argues there was a gentle, kind, and respectful version of Cosa Nostra before the vicious Riina seized control. Many would disagree with that view, but it is one many screenwriters and moviemakers have adapted when creating a film about the Mafia as it is a storyline that strikes a chord with the audience.

It is also the view of Buscetta himself. “Today, the Mafia takes from everybody and gives nothing back,” he testified. “It exists only for the personal benefit of its members. Its members care nothing for the needs of anyone but themselves. […] I have seen so many changes in the organization that I no longer feel bound by the code of omerta or silence.”

In reality, Cosa Nostra had always been a violent, vicious and predatory organization. One that ruled the Sicilian island by fear and intimidation. The only thing that changed was that when Toto Riina and his Corleonesi took over in the 1970s, several other Mafia families lost power and influence. Though they claimed theirs was a gentler Mafia, it was nothing more than a media campaign by those that were on the losing end of the game they themselves have played for so many decades.

Among those “losers” was boss Tommaso Buscetta. After he fled to South America to evade Corleonesi hitmen, he was arrested by authorities and deported back to Italy. To escape his hopeless situation, he tried to commit suicide in his cell. When he woke up, realizing he had failed, he decided to cooperate with prosecutors and destroy his enemies in the mob from the other side.

Working closely with anti-mafia magistrate Giovanni Falcone he set about detailing Cosa Nostra’s structure, history, bosses and members, its politics, and how it makes its money.

His testimony led to the conviction of 435 bosses and members of Sicilian Cosa Nostra in the Maxi-Trials and 35 Mafiosi in the American Pizza Connection trial busting a billion-dollar heroin pipeline as a result.

After his successful cooperation he was granted U.S. citizenship and a place in the country’s Witness Protection Program. In 2000, he died at age 71 of natural causes at an unknown location somewhere in the United States.

His surviving relatives have approved the making of this film, Variety reports. “It will be based on extensive research done by a team of journalists, testimony from people who knew him, and material in Italian archives.”