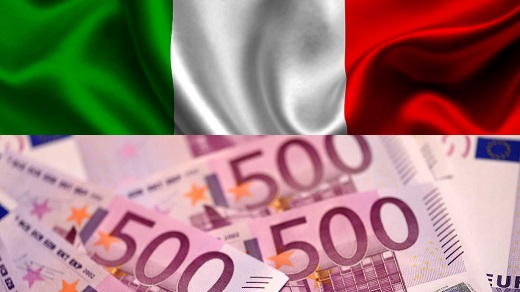 How much money does the Italian Mafia make? How many billions of dollars go up the chain through the organizations of Sicily’s Cosa Nostra, Campania’s Camorra, and Calabria’s ‘Ndrangheta? Criminology professor Francesco Calderoni did the math and came up with some very interesting numbers, numbers that many deem the most accurate so far.

It’s an almost impossible task. How does one calculate the revenue of a group that is as secretive as the Italian Mafia? A group involved in various illegal businesses in which no records are kept or shared with authorities or the public. Where one hand usually has no clue what the other hand is doing. Also, a group that frequently uses bagmen to hide the interest Mafia bosses hold in certain companies.

Still, despite all the obstacles and unknowns when trying to figure out how much money Italian organized crime groups make on a yearly basis, people continue to put out their estimates. Some going as high as €150 billion for all four major Mafia groups (Cosa Nostra, Camorra, ‘Ndrangheta, Sacra Corona Unita) while others claim one group alone makes €53 billion a year.

Impressive figures, but unfortunately none of the organizations putting out these figures can explain exactly how they came up with this number. They analyzed police documents, sure, but nowhere is explained how they turned that information into their estimate.

This bothered investigators at Transcrime, a research center on transnational crime part of Università Cattolica del Sacro Cuore in Milan, Italy. Francesco Calderoni, a criminology professor at the university and researcher at Transcrime, explained some of the negative consequences of these “mythical numbers,” as he calls them.

“These numbers may disseminate stereotypes in the population, stimulate xenophobia, heighten the fear of crime, and distort perceptions of what the real problems are,” he tells Gangsters Inc. “They may ultimately affect the establishment of effective and efficient policies to reduce organized crime.”

As an Italian, Calderoni knows all too well what happens when the government ends up on the losing side of the battle against the Mafia. “I still remember the days of 1992 when Cosa Nostra murdered judges Falcone and Borsellino and the members of their detail,” he says. “Many in my generation felt that we had to do something about it.”

Though he is critical of many of the current studies on the proceeds of Italian organized crime, he understands the difficulties that arise during research. “Measuring criminal revenues is hard,” he admits. “Studying organized crime requires particular care in handling sources and data. You always need to check the reliability of anything. This is a very good practice for a scholar, although it requires a lot of effort. This, in turn, creates opportunities for the birth of mythical numbers, figures about crime that are produced with no scientific credibility but which gain authority by repetition.”

The media love big numbers, as is evidenced by The Guardian’s headline 'Ndrangheta mafia 'made more last year than McDonald's and Deutsche Bank' or Reuters’ headline Italian mafia earnings from drugs rival Fiat with cars. They love them because readers love them as well. Studies that provide the media with interesting information will almost always gain a lot of exposure in national and international media outlets.

“In time, I have realized that reality is often very different from what we normally hear from the media and from policy makers,” Calderoni says. “Organized crime is an easy scapegoat to justify poor performance, lack of results, and limited advancement in the society.”

That is why he felt he needed to make his study as accurate as possible – this, after all, is still the dark, secretive underworld we’re talking about. His study is inspired by a research project conducted by Transcrime for the Italian Ministry of Interior analyzing investments by Mafias in Italy and abroad, and focuses on several questions: What is the income of the mafias in Italy? How is it distributed across Italian regions and types of Mafia?

The research furthermore made a selection of criminal activities it would focus on. These were selected by applying two main criteria. “The first was the frequent association in the literature and official sources of a criminal activity with the Mafias,” Calderoni says. “The second criterion was the availability of information and data enabling estimation of the revenues generated by each activity in a transparent, reliable and replicable way.”

As a result of the selection, the analysis focused on:

“In general, most studies adopt a top down approach,” Calderoni explains. “They select, let’s say, an econometric model, they consider some proxy variables for criminal activities and they get an output. The problem with these works is that they rarely check whether the final figure ‘makes sense,’ for example when compared to the economy in general or to other developed countries.”

That is why Calderoni chose a bottom up approach. “We measured criminal activities separately. In some studies, we preliminarily measured mafia presence and then we estimated the revenues. For each activity we developed a specific methodology, in most cases starting from empirical evidence, for example drug consumption or illicit cigarettes. We then attributed a share of the total criminal revenues to the Mafias. I think our estimates are probably on the lower bound but at the same time I am confident that we have avoided the creation of any mythical number.”

Calderoni’s results estimate yearly Mafia proceeds at approximately €10.7 billion (0.7% of the Italian GDP), with extortion racketeering as the main source of income. The Camorra and ‘Ndrangheta are the Mafia groups with the highest revenues (€3,3 billion and nearly €3 billion, respectively), totaling more than 68% of total Mafia proceeds. Also, the ‘Ndrangheta has successfully diversified its source of income, with only 28% of the revenues coming from its native region Calabria.

“In Italy, the Mafias have a strong presence in their mother regions: Western Sicily and Catania for Cosa Nostra, the provinces of Naples and Caserta for the Camorra, southern Calabria for the 'Ndrangheta,” Calderoni tells Gangsters Inc. “Furthermore, we have found a significant, established presence also in other regions, especially in the area of Rome and nearby areas to the south and in the North-West of Italy (around the three industrial cities of Milan, Turin and Genoa).”

But Italian organized crime is anything but a national problem. Its tentacles spread across the globe. Calderoni quickly sums up the list. “In the world, the Italian Mafias concentrate primarily in several countries: Spain, Germany, and the Netherlands. Together with Colombia, Albania, Belgium, Switzerland, Canada, and France, they account for two thirds of the references to foreign country in our sources. I would also add Australia and the United States. This gives an idea of the diffusion across continents.”

Why is the Italian Mafia so successful at expanding abroad? “Well I think that developed countries provide a wealth of criminal opportunities along with established (Southern) Italian communities which may provide contacts and resources,” Calderoni says. “At the same time, the development of the Mafias abroad is not an automatic, natural, process. Maybe the dictatorships in Argentina and Brazil prevented the establishment of Mafia groups, just as during the first years of fascism the state enacted a strong contrast against the Sicilian Mafia (although it ultimately stopped at the higher levels and probably allied with them).”

Interestingly enough, Calderoni found that most of the countries with a significant Mafia presence are advanced democracies with strong rule of law, low corruption, and efficient criminal justice systems. Calderoni: “I think that this may question the stereotype that the Mafias proliferate in poor socio-economic conditions. Furthermore, whereas most of the countries have or have had significant inflows of Italian migrants in the past, some traditional destinations like Brazil and Argentina do not show a strong Mafia presence.”

Perhaps this is because of the competition Italian crime groups face from local drug gangs, which have grown more wealthy and powerful in the last decades. The idea that the Italian Mafias hold any kind of monopoly over any criminal market is one of the biggest misconceptions published frequently in books, Calderoni tells us.

“Criminal activities are normally undertaken by a wide array of actors, and it would be incorrect to assume that Mafias control or monopolize any of them,” he says. “Studies have highlighted that, with the exception of extortion racketeering, criminal activities at the national and regional level are not monopolized by Mafias. The most significant example is provided by the drugs market. The literature has constantly rejected the hypothesis of monopoly and oligopoly by large structured Mafias. These results have been confirmed also in Italy, except for some small areas, villages or city neighborhoods, where elements of Mafia monopoly have been observed,” he concludes.

“In Italy, I think most of the revenues of the Mafias come from extortion racketeering, private protection, and loan sharking,” Calderoni adds. “These activities are closely associated to the area where a Mafia group is present. Also, they thrive wherever the rule of law and transparency are scarce. The Mafia group’s connections with politics and businesses ensure that they maintain a hold on these territories. After that I would include the illegal markets like drugs, cigarettes, gambling, and counterfeited goods. In these markets however, the Mafia groups are not the only player. They have to compete with other criminals and they have no monopoly whatsoever at the national or regional level.”