As you have read in our three other stories, a gangster in police uniform is one deadly motherfucker. Still, he has nothing on an actual police detective who has no qualms about pulling the trigger on whoever and who has the ability and power to operate above the law. Meet Stephen Caracappa (photo, left) and Louis Eppolito (photo, right), two decorated New York City Police detectives who got away with murdering for the Mafia for over two decades. The two men were dubbed “the crystal ball” by Lucchese family mob boss Anthony “Gaspipe” Casso for their ability to provide him with information that helped him predict who was a rat or enemy and where they were hiding.

Casso put a lot of trust in the two dirty cops. So much so that he did not hesitate to use them to kidnap a man he suspected of involvement in an attempt on his life. The attack happened in September of 1986 and Casso barely escaped death. One of the men who had tried to kill him was Gambino family associate James Hydell. Knowing that the violent Lucchese boss was looking for him Hydell was cautious and laying low. So Casso ordered Eppolito and Caracappa to pick Hydell up and deliver him to him. And they did. They forced Hydell in the trunk of their car and drove to Casso. After Eppolito and Caracappa left, Hydell was tortured by Casso who wanted to know who had ordered the attempt on his life. It wasn’t until Casso had all the names of those involved and had exacted enough violent retribution on Hydell that he killed him.

The Mafia Cops had made their bones.

Information given by Eppolito and Caracappa would continue to bring death to many doorsteps as Casso and his men went on a rampage against anyone they perceived as, or were told was a threat. As a result of the Mafia Cops at least eight people were killed, including an innocent man whose bad luck was that he had the same first and last name as a wiseguy.

But it wasn’t until 1990 that the Mafia Cops showed just how much they had descended into hell. Gambino capo Edward Lino was driving on the Belt Parkway in Brooklyn when he was pulled over by Eppolito and Caracappa. Lino had no reason to worry since these men were cops, he probably thought.

As a veteran mobster Lino had done and seen it all. For two years Casso had a contract out on Lino’s life, but yet here he was, breathing and all. It had been four years since Lino and two other Gambino wiseguys had dispatched a hit team to whack Casso and “Gaspipe” felt it was high time Lino himself was dispatched to hell. 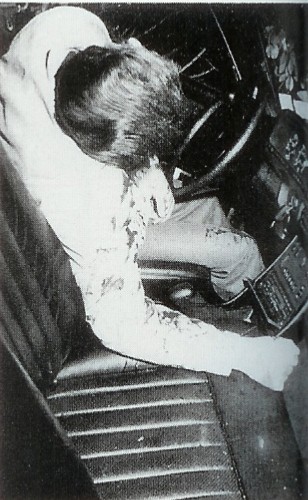 As Lino parked his car along the highway on that November day he had no idea that the cop car that pulled him over was being driven by two demons in disguise. Caracappa slowly walked over to Lino’s car where the mobster was waiting and had just rolled his window down. When Caracappa was close enough he pulled out his gun and fired several well-aimed shots. A few seconds later Lino’s bullet riddled corpse was bleeding all over the interior of his car (photo right).

The elusive and cautious Gambino captain was dead. Death by Mafia Cop. Casso couldn’t have been more pleased.

Despite mounting evidence and testimony given by Anthony Casso, Caracappa and Eppolito managed to retire to Las Vegas where they lived across the street from each other, in freedom. Still close as ever. And that wasn’t the only thing they continued doing. They also continued acting like Mafia Cops or, more accurate, Mafia thugs. They supplied people with meth and no doubt bragged about knowing Tony the Fish and Carmine the Giant from Queens.

But the Mafia is not the only entity with a long memory. Justice never forgets either and authorities were working round the clock to bring the two corrupt detectives down. And just like the mob the Department of Justice usually gets its man.

In March of 2005, Caracappa and Eppolito were arrested on racketeering and murder charges. After a trial in which Eppolito was represented by famous mob lawyer Bruce Cutler, the two disgraced cops were found guilty on all charges. They are currently spending the rest of their lives in prison.