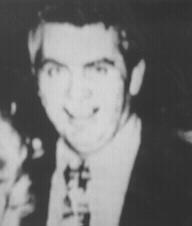 This profile first appeared on the Alleged-Mafia-Site and is written by Shannon Dougherty.

Dubbed "the Irish guinea" by his Italian-American gangsters, Burke was known as a "gentlemanly" criminal and preferred to make his illegal income from swindles. Burke was close with the Upper West Manhattan's Hell's Kitchen Irish mob. Gangster Hughie Mulligan had taught Burke the ropes. In the boroughs of Queens and Brooklyn, Burke held close contact with Lucchese underboss Paul Vario. Burke was about as well-connected as an Irish American associate could expect with regards to La Cosa Nostra crime syndicate.

During the 1950s Burke went about having trucks illegally import cheap cigarettes from the Carolinas. He also bought untaxed and cheaper liquor from Native American reservations. Burke also pulled his fair share of hijackings from trucks leaving JFK International Airport in Queens. With regards to hijacking, Burke had a clever plan and it always worked. After accosting the truck driver, Burke would take his union card or driver's license and slip him a few bucks. The identification cards were merely a scare tactic and it allowed Burke to know where the driver lived. This was in case something went wrong and the cops came looking for Burke. Sometimes, to make the hijack appear authentic, Burke or an associate would give the driver a punch. Usually Burke apologized and soon drivers would just give them the trucks. They were called "gimmes" and Burke usually matched a driver's weekly pay with a bribe.

By the early 1970s Burke was a loanshark, thief, counterfeiter and fence man. He also held, in secret, a partnership in the notorious "Roberts Lounge" bar which was located in Ozone Park, Queens. Robert's Lounge was frequented by much of New York City's underworld. It also boasted a big bookmaking operation that Burke controlled. By the mid-1970s Burked was convicted, along with Henry Hill, for a loansharking and assault charge. He was given over 5 years and sent to Atlanta Federal Prison. His cellmate was Steven "Stacks" Edwards who was an African-American hoodlum that specialized in credit card fraud. Edwards was also a longtime Roberts Lounge patron. Then when Edwards was paroled, Thomas "Two Gun Tommy" DeSimone was his new cell mate. DeSimone had botched a hijacking attempt and was sent to Atlanta.

By mid-1978 several employees of Lufthansa Air Cargo port, which is based in JFK International, were talking about Building 261. Claims were made about the tens of millions in currency that passed through each night. The employees went searching for gangsters to pull a robbery but fell on deaf ears, or so they thought. One of the employess was indebted to Long Island bookmaker Martin "Marty the Bookie" Krugman. Since the Lucchese family "controlled" the airport, gangsters began seeking out Vario for his approval to rob it. Vario declined. Vario then had plans for Burke to pull off the scheme and word eventually floated back to the imprisoned Irish American gangster. Ironically, Burke, who was considered a "model prisoner", was making plans before he even left prison. When he and DeSimone were paroled in early December 1978 they had it all planned out. Both he and DeSimone would be placed in a halfway house located in Times Square. Burke arranged for he and DeSimone to have "no-show" jobs in Manhattan's Garment District. They then went about bribing guards so they could meet up with a gang at Roberts Lounge in Queens.

The gang would consist of criminals such as Edwards, DeSimone, Krugman, Angelo Sepe, Robert "Frenchie" McMahon, Richard Eaton, Pietro Licristo and a believed Lucchese soldier. Edwards responsible for picking up an additional gateway van. By 1:00 a.m., December 11, 1978, DeSimone and Burke had left the halfway house. When they arrived at the airport, DeSimone proved unreliable and only one van was available. The reason for two vans was because it was believed that $20 million was waiting for them behind Building 261. After they rounded up the Lufthansa heist, the gang began to pillage and take what they could. In the end $6 million in U.S. dollars and an additional $4 million in other currency and jewelry. Very little of it was ever recovered.

Burke and DeSimone made it back just in time for the change in guards at the halfway house. In the end, by the summer of 1979, all members of the gang were killed. Some of their bodies were found and others were never recovered. Besides the gangsters, Theresa Ferrara, who had worked as an FBI informant was found dismembered along the Jersey shore. Edwards, who body was found, was killed because he failed to have the vans destroyed. DeSimone because of his failure in locating a second van which would have ensured a larger take. The others for their greed. Only Sepe survived. When the body of Richard Eaton was found in an abandoned cargo trailer, it would lead to Burke's eventual conviction.

The final take for Burke was believed to have been a little over $2 million plus some of the additional $4 million. Vario, who was semi-retired in Florida, would garner $2 million. The same amount was believed to have been given to Lucchese family boss Anthony "Tony Ducks" Corallo. Prior to the 1978 heist, Burke and Las Vegas underworld figure Richard "Richie Fix-it" Parry were busy point shaving Boston College sports games. Burke would continue this until 1980 when his indictment was brought down. He would be convicted for the Richard Eaton murder and sentenced to life. Much of the testimony was supplied by Sepe and Henry Hill. In April of 1996 Burke died at an upstate New York minimum security prison from lung cancer.

Read about the recent Bonanno bust that has links to James Burke: