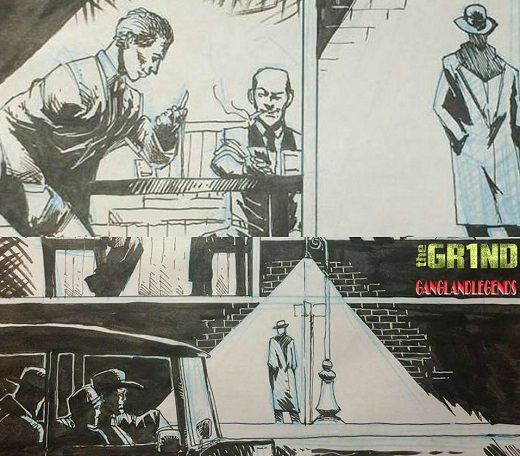 The life story of legendary New York mob boss Charles “Lucky” Luciano continues to entertain the masses. After adaptations for cinema and television, Luciano’s criminal adventures now find their way to the world of comic books with the help of best-selling and award-winning crime authors Christian Cipollini and Seth Ferranti.

When it comes to larger-than-life gangsters, New York godfather Charles “Lucky” Luciano ranks among the top of that heap. “For me personally, there was just something about Luciano that hooked me,” mob author Christian Cipollini tells Gangsters Inc. “Going back twenty-five years or so, picking up a used copy of The Last Testament and I couldn’t help but wonder – Why did we only ever hear about Capone? This guy, Luciano, and his pals were basically built or better said – evolved organized crime into what legitimate business had to examine for its own success.”

“Lucky Luciano is one of the most infamous Mafiosi who ever lived,” crime author Seth Ferranti tells Gangsters Inc. “I can’t believe no one has done a comic on him. I have always been a fan of him, from the name and the profession to the way he did things and started the national syndicate.”

If anyone knows gangsters, it’s Ferranti. After being convicted of drug kingpin charges, he’s spent 21 years behind bars getting to know a lot of them personally. Though he was locked up, Ferranti refused to be contained. He began writing and started a publishing house. After releasing several true crime books he recently made the leap into the world of comic books with his publishing company GR1ND.

“At GR1ND we are bringing true crime to comics,” he says. “We are bringing the stories but let the art do the talking. Images are at the forefront of comics so it’s not necessarily about the words. But the story is still being converted through images.” 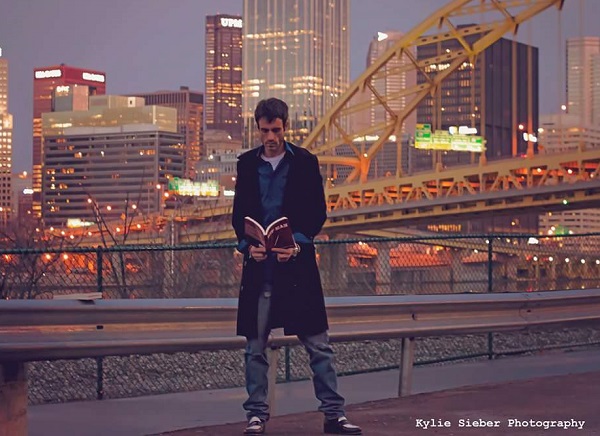 The images, of course, are only as good as the story. That’s where Christian Cipollini (above) comes in. Author of several crime books such as Diary of a Motor City Hit Man, Murder Inc.: Mysteries of the Mob’s Most Deadly Hit Squad, and Lucky Luciano: Mysterious Tales of a Gangland Legend, he was the perfect man to translate Luciano’s story to the image-rich world of comics.

“My personal goal with this was to fill in some blanks of Luciano’s life, particularly the mythologized or incorrectly recorded elements, and, to put true crime history – which is most certainly an important part of history as a whole – into the eyes and minds of perhaps a new audience,” Cipollini explains. “In other words, I wanted to bring these tales to life, in a visually stunning and entertaining manner, yet shed light on some mysterious elements of history in a true crime kind of way.”

The premier issue, titled LUCKY - A Scar Is Born, focuses on an important moment in Luciano’s mob career. “I wanted to kick start the series with the most debated and/or misunderstood climactic moment of Luciano’s history,” Cipollini says. “Although the series will definitely do some flashback moments, the first issue is all about the incident that changed both Lucky’s face and the face of organized crime forever.”

The switch from books to comics was quite a transition for author Cipollini. “They are two very unique entities, long form nonfiction books and comic book/graphic novels, in terms of writing process,” he says. “Having become accustomed to writing out lengthy details, narrative or quotes in my books, I can tell you it was a shock to my system to adapt into several word dialogue exchanges or a handful of captions. My respect for the comic art form grew astronomically within about ten minutes of starting this project. As with anything, just because I read comics as a kid didn’t mean I knew the first thing about how intricate and skilled one must become to master the entire art form.  What was sort of similar though, was how I approach any project I take on. With the books, I tried to write them for both the connoisseur of organized crime history and for a general, curious audience.  With the comic books, I tried to keep the reality, i.e. the ‘true’ in the crime storytelling, but also maintain pace, entertainment value and suspense for those who perhaps aren’t necessarily ‘into’ crime stuff.” 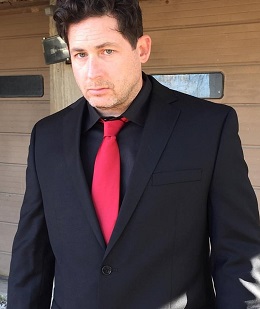 The process of turning a true crime book into a comic is one involving several layers, each with its own expert attached to it. “The writer originally comes up with the concept and writes the script that the artist goes off of,” Ferranti (right) explains. “These are the blueprint for the book. The artist makes the writer’s words come alive on the page through pencil and ink. Then a color artist adds the color and a Letterer adds the words. So a lot of people do their part to make a comic into what it is.”

For Cipollini it meant writing a script for two different audiences. Cipollini: “First, it is writing a script for the artist to interpret and turn into visual magic. It is also writing for the reader, the plot and storyline itself, with dialogue and/or captions. The Letterer crafts all the dialogue and puts into strategic places within the panels, and the coloring is an art in and of itself as well. And of course the editor whips everything into shape. These people are incredible. Evgeny Frantsev is the artist, Micah Myers is the Letterer, and Anthony Mathenia is the editor. Of course, Seth [Ferranti] set this whole thing up and I am forever grateful to him.”

Ferranti: “I have always been a big fan of comics. I’ve been reading the X-Men and Batman since I was a kid. I always liked the independent comics too, like Groo and The Maxx and Battle Chasers. Mixing crime and comics is natural to me. I can’t believe that other people haven’t done comics like this before. It’s just a natural progression for me.”

Though this is not the first time mature content finds its way to the pages of a comic book, the true crime subject matter might be seen as glorifying organized crime and the Mafia, making light of Luciano’s crimes. For Ferranti and Cipollini, however, things are not so black and white.

“Although I personally try to deliver true crime stories from a perspective of outsider, or the ‘all sides get a say’ angle, it is also my goal to show humanity within inhumanity and vice versa. Evils within the Good and vice versa,” Cipollini explains to Gangsters Inc. “The Lucky Luciano comic certainly dips into some of the socio-economic reasons that can, arguably, be attributed to why some people venture into criminal behavior, while also shedding light on some of the darker fallout that occurs from the business these gangster folk heroes left upon the world.”

Ferranti: “We are glorifying the legend just like Hollywood and popular culture has done, but ultimately the type of writing that Christian [Cipollini] and I do are cautionary tales. So that is what this comic represents: A cautionary tale. And it’s in a format that is becoming huge right now. The comics industry is very healthy and there is a lot of room for material like this. I think it will be well accepted by the industry and fans alike.”

Cipollini: “This comic is for anyone looking for a gritty, visually unfiltered reading experience. I don’t hold much back in the writing process and our artist nails it, so hopefully anyone who enjoys something a little different will enjoy this. Ultimately I look at it this way – anytime someone reads something I’ve written, old or young, woman or man, avid reader or someone who rarely picks up a book… I feel good, hoping it conjures a response, a feeling, strikes a chord or simply encourages them to further reading, exploring all that is out there. That’s what makes me want to create more.”

LUCKY - A Scar Is Born will be released this spring. Written by Christian Cipollini. Illustrated by Yevgeniy. Paint by Anthony Mathenia. Lettering by Micah Myers. On Seth Ferranti’s #THEGR1ND.

You can get your copy in print, on ComiXology and Kindle, plus on Christian Cipollini’s website www.ganglandlegends.com and Seth Ferranti’s www.thegr1nd.com or his personal website www.sethferranti.com

Enjoy this sneak peak at a page from LUCKY - A Scar is Born: 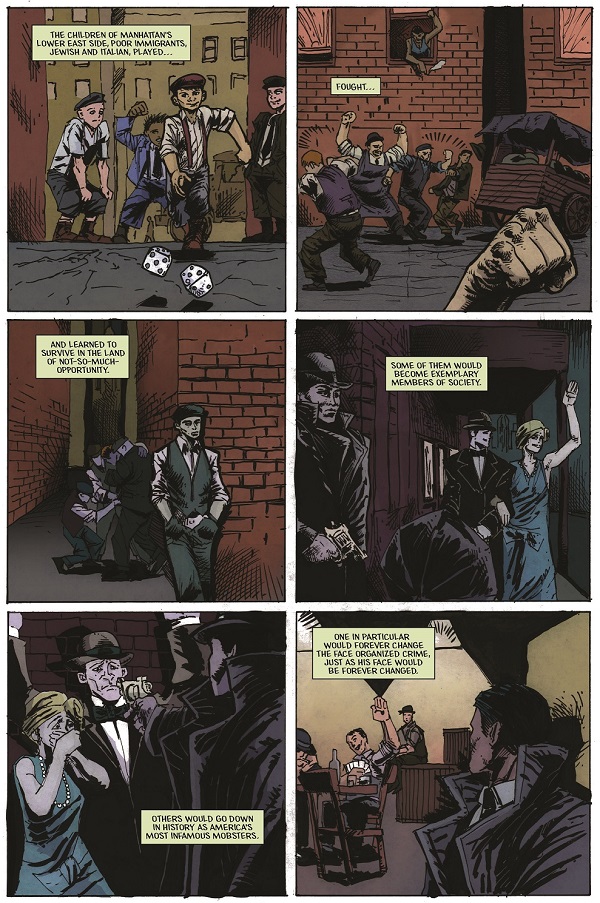