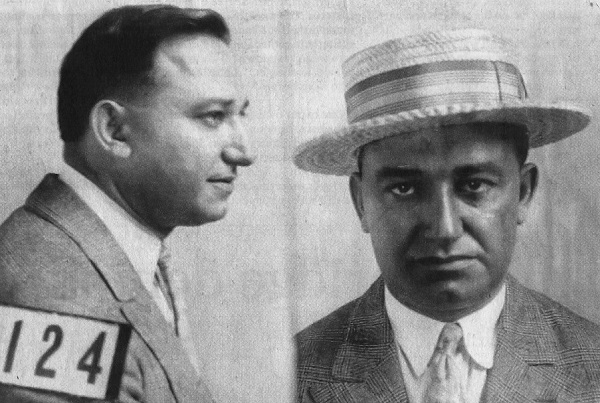 Every underworld has its first major crime boss. That man – or woman – who ascends to the top of the heap and controls organized crime in the city. For Hamilton, Ontario, that man was Rocco Perri. During the years of Prohibition, he became known as the “King of the Bootleggers.”

Born in Calabria, Italy, as Rocco Perre in, depending on the account, 1887 or 1890, Perri came to Canada via the United States as a teenager in 1903. As a newly arrived immigrant he held various jobs trying to set up a life in the new world. He worked in a Dundas stone quarry and as a construction worker on the new Welland Canal.

A decade later, he had settled in St. Catharines in southern Ontario with Bessie Starkman, the love of his life. While Perri worked for an Italian macaroni manufacturer, they struggled through poverty. The couple moved once more, in 1915, to Hamilton, where they opened up an Italian grocery store.

It seemed Perri’s hard work had finally paid off, but perhaps this was not the case. Maybe he was unable to make ends meet selling groceries or maybe he just wanted more. Whatever the reason, once Prohibition was enacted in Ontario in 1916, Perri turned his store into a speakeasy where customers could get whiskey for 50 cents a shot.

From that moment on, things went fast. His operations expanded as he got into the smuggling of alcohol. He commanded an army of men and owned a fleet of fast boats and souped-up cars which he used to traffic booze into Hamilton and on to the United States, where he had connections to Chicago mob boss Al Capone, New York Mafia kingpin Frank Costello and even the would-be presidential Kennedy family.

“I only sell the best liquor”

As his wealth and power grew, Hamilton got more and more violent, but Perri was adamant that these gangland murders had nothing to do with him. “While I admit that I am king of the bootleggers, I can assure you that I have nothing to do with these deaths,” he told The Toronto Star newspaper in 1924. “I only give my men fast cars, and I sell only the best liquor, so I don’t see why anyone should complain, for no one wants Prohibition.”

In a surprisingly candid interview, Perri went on to talk about his revenue, adding: “[…] so you can see I do a big business. Some days I handle 1,000 cases for my customers, and the very best families are my customers.” A case of whiskey was bought at $18 and sold for $80 leading to enormous profits.

A significant portion of it went into the pockets of police officers and politicians. This caused Perri to feel safe enough to chat with the reporter about his illegal operations. And he was right to feel that way. As public outrage over the interview grew, police commented that a boast is not proof of guilt.

They might not have come cheap, but those cops were worth every penny.

Perri’s money didn’t always buy him protection, however. Sometimes it served as a target on his back. Rivals sought to eliminate him and take over his territory. On the night of August 13, 1930, Perri and his wife arrived home from a family visit. After parking their car in their garage, two gunmen came nearer and unloaded their deadly cargo.

As shots rang out, smoke filled the garage. Perri tried to protect his wife, according to news reports, but in the chaos that ensued, no doubt realizing he was the target, he opted to flee. When he came back minutes later, he found his beloved Bessie dead in a pool of her own blood. The hitmen had hit her with two blasts and left her behind still wearing thousands of dollars’ worth of jewelry – evidence that this was definitely not a robbery.

Despite a $5,000-dollar reward offered by Perri, Bessie’s murder was never solved. Later accounts claim she had been the intended target of the killers as she pulled a lot of strings behind the scenes and was seen by some as the true force behind Perri’s crown.

After the death of his wife, Perri continued bootlegging, running a brewery on Fleet Street in Toronto. His enemies also continued trying to eliminate him.

On March 20, 1938, several sticks of dynamite were thrown under his porch causing a major blast that harmed no one. On November 23, they tried again. As Perri sat in his car after a card game and switched on the lights and pressed the starter an explosion tore his car apart and sent him flying through the air. Still alive, he got up and dusted himself off like some cartoon character.

Where his rivals had failed removing him from the streets, the Second World War succeeded. When the war rolled around and Allied Forces battled Nazi Germany and its allies, including Italy, Perri was labeled an enemy alien and placed in Petawawa detention camp. He was released in 1943.

Perri’s story becomes mysterious on April 23, 1944. That day he is in Hamilton visiting a cousin. After complaining about a headache, the “bootleg king” steps outside for a breath of fresh air never to be seen again.

It was generally assumed he was kidnapped by rivals who subsequently killed and buried him in an anonymous grave. A popular saying refers to Perri being given cement shoes and dumped in the harbor: “Remember when the water in Hamilton Harbor was so clear you could see Rocco Perri?”

Decades later, Antonio Nicaso, author of Rocco Perri: The Story of Canada's Most Notorious Bootlegger, presented evidence that refuted Perri’s death at the hands of mob assassins. An Italian cousin of the mob boss told Nicaso that Perri died in 1953 in Massena, New York, and presented a copy of a letter written by Perri dated June 10, 1949.

The letter, which is in Italian, reads: “Dear cousin, with this letter, I will tell you I am in good health. Let them know I'm fine if you've heard the news.” Signed Rocco Perri.