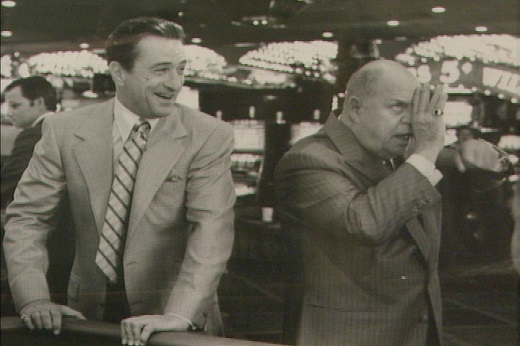 Would you tell a vicious mobster to his face that his wife looks like a moose? Seriously. Would you have the balls to do that? Forget about balls for a second, would you be crazy enough to do that? You, probably not. But comedian Don Rickles built his entire act around it. Nicknamed the King of Zing, Rickles pokes fun at everyone. Blacks, whites, Jews, Italians, politicians, and, most surprisingly, the powerful, vicious gangsters attending his shows.

Rickles’ routine as an insult comic began when he was doing stand-up comedy in the 1950s. Audiences didn’t think his material was all that funny and began heckling the young comedian, hurling insults at him. Rickles’ natural quick-witted responses blew all of them out of the water and made them laugh harder than at any point during his regular bit. He found his calling.

Working the nightclubs in New York, Florida, and California, Rickles developed a timing that caused his insults to hit targets with pitch perfect accuracy for maximum comedic effect. That is, if you were in on the joke. But not everyone was.

Like that one time when Rickles played a gig in New Jersey.

“So there I am, going along, singing a song, the audience loving me, when I notice this beautiful girl whose boyfriend resembles a small gorilla,” Rickles writes in his memoir. “Just looking at him, I know he’s connected [to the Mafia]. ’Is that your wife?’ I ask. He nods yes. ‘Geez,’ I say, ‘She looks like a moose.’ The audience sees my take and laughs. The gorilla stares at me like I stole his banana.”

After the show that angry gorilla shows up backstage and starts coming straight at Rickles. Now what?

Jon Stewart, comedian and host of The Daily Show, was baffled about that as well. “You’re a young kid, nobody knows who you are,” Stewart tells Rickles. “You’re opening up for strippers, you’re playing gin joints in Jersey, and you’re doing the same thing in front of mobsters! How did you not die?!”

“Well,” Rickles answers with a smile, “I had guys in Brooklyn who went ‘Don’t hurt the kid he’s with us!’ No, those guys were tough, but when they got to know you they were pussycats.”

For an insult comic it’s probably best to have more than one protector. Luckily for Rickles he had protectors everywhere, chief among them his doting mother. “Joey Gallo, who’s gone now,” Rickles reminisces. “I’m at the Copacabana and I’m working the room and the place is packed. Everyone went up into the lounge in those days before the second show was on. I would be out there and my mother would be with me. She’s very strict, she’s like a Jew Patton, very strict. So we’re in the Copa and the [Gallos] are there and my mother walks over and says ‘The only way you get to talk to my Don is if you put your guns on the table. Guns must be on the table.’ I said, ‘Mom, will you stop it!’ ‘Will YOU stop it! I know what I’m saying,’ she said. Joey Gallo, all [his guys], put their guns on the table. And there I was sitting with five guys with guns on the table.” In the end, Rickles doesn’t need any protection. His comedy routine quickly made him one of the most beloved comedians in America. He became close friends with Frank Sinatra and Dean Martin (right) and was considered an unofficial member of the Rat Pack. He starred in his own television show and dozens of movies, most notably in Toy Story 1 and 2 as Mr. Potato Head and in Martin Scorsese’s mob epic Casino, where he played Robert De Niro’s right-hand man.

Rickles can insult anyone and instead of making them angry he makes them laugh harder than they ever did in their life. At the ripe old age of 88 he still performs for sold-out crowds.

So what happened to that mobbed up gorilla looking to stomp Don into the floor after insulting his girl at a show in New Jersey? Rickles: “I’m backstage relaxing. In walks Ape Man on the arm of his lovely lady. ‘Tell me again,’ he asks belligerently. ‘Does she look like a moose?’

“’It’s a joke,’ I say. ‘I swear to God, it’s a joke.’ ‘If you really think that’s funny,’ he snaps back. ‘I’m gonna have to straighten you out.’ His look convinces me that he’s not lying. I immediately run to the phone and call a friend who’s connected to some good people in New York.”

“Following night, Mr. Charm returns, a different man. Apparently, he got a call. Without missing a beat, he puts his arm around me and says, ‘You’re right. She’s a moose. You crazy bum, I love ya!’”