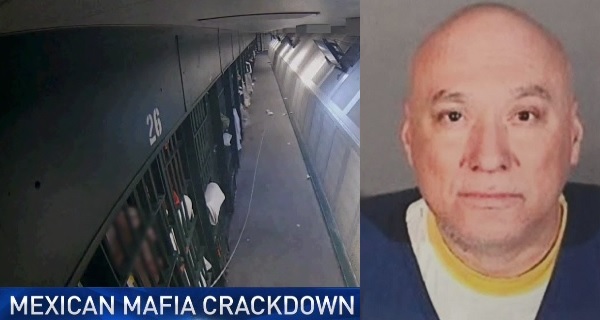 Law enforcement in California dealt a big blow to the Mexican Mafia on Wednesday, charging 83 individuals in two federal racketeering indictments, one of which outlines how members of the group were able to control drug smuggling, narcotics sales and the extortion of prisoners inside the Los Angeles County Jail System (LACJ).

The indictments are the result of Operation Dirty Thirds and detail the power structure of the Mexican Mafia and its violent exercise of authority over Latino street gangs in Southern California and inside the sprawling LACJ.

According to prosecutors, a criminal enterprise inside the LACJ led by members of the Mexican Mafia allegedly engaged in drug trafficking, extortion, money laundering of criminal proceeds, and disciplining through assaults and fines.

In the extortion scheme all Latino inmates were required to contribute a percentage of their commissary spending on food and hygiene items into a “kitty” that generated additional income for the Mexican Mafia member when the kitty was sold to an inmate.

These criminal activities allegedly took place during a period when Mexican Mafia member 55-year-old Jose Landa-Rodriguez (photo above) and two now-deceased members of the prison gang allegedly controlled the criminal enterprise in the L.A. County Jail.

Landa-Rodriguez, who was incarcerated there at the time and other leaders of the enterprise exercised power with the help of trusted “shot-callers,” facilitators, and associates. “These Mexican Mafia members and associates, working together to control criminal activity within LACJ, have become their own entity or enterprise and effectively function as an illegal government within LACJ custody facilities,” the indictment states.

He allegedly sanctioned murders, a series of assaults, and the kidnapping and planned murder of the relative of a gang member who had defied him.

A second Mexican Mafia member, 33-year-old Luis Vega, is named as the number two defendant in the LACJ indictment. Vega allegedly ordered a murder and directed assaults against those who showed disrespect or failed to follow Mexican Mafia rules.

“Operation Dirty Thirds lifts the veil on only one aspect of the complicated factors behind inmate-on-inmate assaults and the dangers to our custody staff,” said Sheriff Jim McDonnell. “Many assaults have been directed, and carried out, by the Mexican Mafia and are documented in this investigation that took more than four years.”

One of the key facilitators for Landa-Rodriguez allegedly was attorney Gabriel Zendejas-Chavez, who was among those arrested on Wednesday morning. The indictment, which notes that attorneys are particularly valued members of the operation because attorney-client privilege can serve as a shield to conceal criminal activity from law enforcement, accuses Zendejas-Chavez of conveying messages and orders related to the criminal enterprise.

Prosecutors allege that Zendejas-Chavez travelled to state and federal prisons to convey messages to Mexican Mafia members, including those incarcerated at ADX Florence; conveyed information, including the names of people potentially cooperating with law enforcement, to members of the LACJ racketeering enterprise; and facilitated a plot to extort $100,000 from the Mongols outlaw motorcycle gang.

Drugs Inc. while Locked Up

“These cases have delivered a major blow to the Mexican Mafia and leaders of many of the street gangs under the control of the organization,” said United States Attorney Nick Hanna. “By taking out the gang members who control the jails, and by disrupting their communications network, we undermined the Mexican Mafia’s ability to coordinate street gang activity.”

“Gang violence in the jails also spills over to the streets and adversely affects our communities,” said Paul Delacourt, the Assistant Director in Charge of the FBI’s Los Angeles Field Office. “This three-year investigation focused on players at all levels for their role in the conspiracy – from the shot-caller, to the secretary, to the dealer, to the smuggler. Today’s successful operation is a direct result of law enforcement partners working cooperatively at all levels of government.”

The second RICO indictment unsealed today focuses on a second criminal enterprise that allegedly was run by another incarcerated member of the Mexican Mafia, 61-year-old Michael Lerma, also known as “Pomona Mike.” Lerma exercised control over, and extorted drug proceeds from, Latino street gangs in and around Pomona, as well as from incarcerated Latinos in Calipatria State Prison in Imperial County.

Members of Lerma’s criminal enterprise also allegedly engaged in robberies, identity theft and fraud, drug trafficking, kidnapping, and other acts of violence. Lerma profited from these criminal activities when top-level female associates known as “señoras” deposited proceeds into his prison account, according to the indictment.

In one incident alleged in the indictment, members of Lerna’s criminal enterprise attempted to steal a Mercedes-Benz automobile that was owned by a LACJ inmate. When the caretaker of the car refused to turn over the vehicle, one of the defendants named in the indictment shot him. In another incident allegedly involving members of Lerma’s organization, a woman was kidnapped, held for several days while being extorted for money, and was going to before murdered before the plot was disrupted by law enforcement.

The two indictments unsealed today charge a host criminal offenses, including conspiracy to engage in racketeering activity; violent crimes in aid of racketeering activity; carjacking; conspiracy to distribute and possess with intent to distribute methamphetamine, heroin, cocaine, and marijuana; distribution of and possession with intent to distribute controlled substances; money laundering; possession of at least 15 access devices (credit card numbers); aggravated identity theft; and use, possession or discharge of a firearm in furtherance of a crime of violence or drug trafficking crime. If convicted, most of the defendants could be sentenced to decades in federal prison, and some could face life without parole.