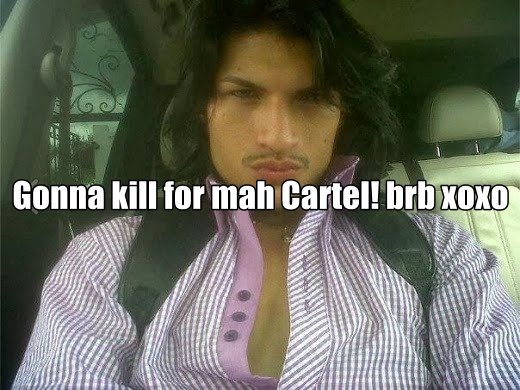 With all the violence in this sordid world of ours we should remember that, no matter how difficult things get, laughing helps. It lightens our mood. We are able to cope with unimaginable sorrow. The dark underworld might not offer us many laughs but we at Gangsters Inc. decided to dig deep and find a smile buried beneath a pile of dirt. Cause, hey, that’s what goodfellas do!

For our first edition we present to you: The Mexican Drug Cartels. Known for turning Mexico into an upgraded version of Afghanistan with a boob job and tastier cocktails, the drug Cartels have said goodbye to anything even remotely resembling a little thing called decency.

Torture, beheadings, mass graves, truckloads of corpses dumped on an overpass highway during busy traffic hours, body pieces littered across the street, burned bodies hanging from a bridge, you name it, the Cartels’ vicious assassins have already done it and got the t-shirt to prove it.

Seriously. They got the t-shirt to prove it. Matter of fact, check your social media timelines for some photos! They are kind of proud of their handiwork and love to share it with the world. Gracias a Dios for Twitter, Facebook, and Instagram! 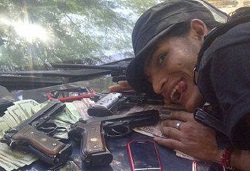 It’s more than just an ego thing, as Antoine Nouvet from the SecDev Foundation, a Canadian research organization, told Vice.com: “They advertise their activities, they conduct public relations initiatives, and they have basically turned themselves into their own media company.”

Like when the Los Zetas Drug Cartel wanted to get a message out to their rivals in the Gulf Cartel. They had tried peeing to mark their territory, they then started leaving dead bodies in certain areas to send out signals, but it simply didn’t work.

So they decided to post a 40-second video of a woman who is on her knees in jeans and a pink top… Oh, don’t worry, this is suited for work. No nudity involved here. A clean video as they say.

Let me continue, a masked man stands behind her holding a knife and says in a gruff voice: “Well, gentleman, this is what happens to all those in the Gulf Cartel. On behalf of Los Zetas.”

He then cuts off her head.

See! Totally suited for work. And Facebook. No nudity or sex, because we all know employers and Facebook hate don't allow that kind of stuff. Just a decent beheading of a woman. Without any wardrobe malfunction that made her titties pop out.

Then again, maybe I missed a nipple because apparently Facebook later did take down the video. Some mumbo jumbo about graphic content lacking a “Me no like” button.

Oh, Mark Zuckerberg. Why so serious? 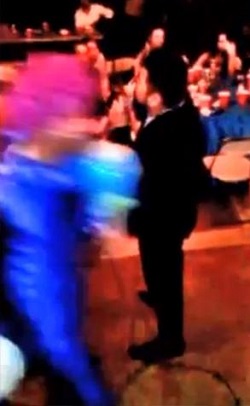 These Mexican drug Cartels are doing everything in their power to make the war on drugs funny! They just need to work on their routine.

For instance, take the party thrown by Tijuana Cartel boss Francisco Rafael Arellano Felix. Many people wanted Felix dead. And they had a variety of ways to do it. They could do a sniper hit, maybe throw some hand grenades, fire a bazooka, a good ol’ drive-by shooting maybe, the possibilities were endless.

So with their eyes on as many Facebook “likes” as possible Felix’s enemies put together a plan they considered both original and funny. They’d send in a clown!

It wouldn’t have been my idea for a funny plot, but it worked.

As the band played, the people danced, a hitman dressed in a colorful clown costume with a fright wig and a big red nose walked by and fired several shots at Felix, killing him on the spot (video below).

According to the New York Daily News the murder remains unsolved. All clowns tend to look alike, of course. Not being racist here, just stating facts. And if you ask me… clowns are evil. And weird. And totally not funny!

It’s time for people to start shifting focus from the war on drugs and violence to the real problems we are faced with in this world. Problems like wardrobe malfunctions, cursing, nipples, dicks and vaginas, and, most importantly, killer clowns!

When will it stop, people?