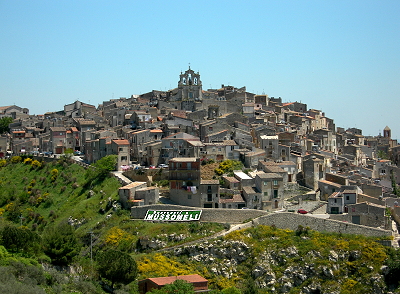 After the spectacular capture of Corleone capomafia Bernardo Provenzano by police in 2006, Sicily braced for a blowback. If history is an indicator, observers warned, a Mafia war will break out. And it will take the form of either an internecine turf battle or a vendetta against the state. Both scenarios assured a high body count.

As an outsider, I could sense the dread of those uncertain days—even as the island was in full spring bloom. Yellow daisies covered the hills that drop into Mussomeli, a postcard village worth its roller-coaster approach. I had come to photograph the tomb of the region’s legendary godfather, Giuseppe Genco Russo (no relation, I assure you). When Mussomeli popped into view, I pulled my car to the side of the road to shoot the panorama.

Up ahead a few hundred meters stood a policeman casually talking to a man seated on a parked scooter. The officer took keen notice of me. As I jumped out of my car, he instinctively jerked into a defensive position, knees bent and ready to spring, his fierce eyes betraying fear. Quickly, I waved my camera before he went for his gun. I don’t know which of us was the more scared. I took the stupid picture and left, vowing to avoid Italian cops forevermore.

Twenty-four hours later I managed to piss off a pair of heavily armed agents of the Finance Guard. This is the paramilitary squad that seizes the assets of mafiosi like Provenzano. My crime? Photographing the Guard’s station house in Corleone. I should have known better.

To frame the shot, I planted myself across the street from the station in the shadow of some trees, then snapped a picture. At that instant, a young uniformed agent stepped outside the building and spotted me.

“O! O!” he shouted. That’s Italian for Hey! He swatted the air furiously with his hand which looked like he was waving goodbye but, in the south, means the opposite.

“Come here!” he demanded. I came out of the shadows waving my camera like the white flag of surrender.

“I’m only a tourist,” I yelled back as I crossed to him cautiously. He had the face of a nervous rookie fronting grit. I pictured a dingy jail cell. Interrogators singing fascist favorites. An international incident.

At that point an older, heavyset officer stepped out of the station, attracted by the commotion. He didn’t look scared or even angry when the younger one informed him I’d taken a picture. I noticed the array of antennae and surveillance cams that covered the razor-wired roof.

“I’ll explain myself,” I said, before they asked. I brought up the image on my camera screen— the only one I’d had the chance to take. “I’m an American tourist.”

“Passport,” the older officer requested in the routine manner of an Alitalia ticket agent. I told him it was in my car and pointed to the rental parked down the hill. He took my camera and sent me to fetch the document as he and the rookie had a hushed discussion. In the car, I quickly stashed my folders stuffed with Mafia notes and news clippings under the seat then grabbed my passport. I returned and handed it over, launching into my explanation. It was the honest truth.

“I was at the anti-Mafia museum [in Corleone’s old town] and they told me that Totò Riina’s former villa is now the Finance Guard’s station house.” Riina was Provenzano’s partner when they ruled the Cosa Nostra and the man most responsible for the assassination of dozens of Carabinieri, cops and judges. The Riina name, I knew, was anathema to my inquisitors. The older officer examined my passport. “Russo, eh?” he said. “I have relatives named Russo in Naples.”

“There are a lot of Russos in Naples,” I replied in an attempt at levity. The name is the Smith of the region.

“That’s true,” he said, cracking a smile. Then, abruptly, “Let’s erase this picture. Are there more?”

“No, just the one.” I zapped the image into oblivion, relieved to be erasing my crime but sorry to lose the shot.

“Now look there,” he said, pointing down the hill in the direction of my car. “You see that villa? The pink one.” I saw a large, newly built house painted a garish pink. “That’s the former villa of Totò Riina.”

“Well, I’m very sorry about this, signori,” I said, anxious to leave. The older officer handed back my camera. I trod down the hill and started shooting, noticing that the rookie, now standing alone, kept a watchful eye on me. After several exposures, I got in the car and drove back up the hill. I waved to the young officer. He glared. If you go to Corleone today, you can see the former villa of Totò Riina. But don’t photograph it! The house is the now the new headquarters of the Finance Guard.

San Francisco writer Carl Russo blogs at www.MafiaExposed.com. His new book, The Sicilian Mafia: An Illustrated Travel Guide will be published by Strategic Media Books. Russo currently has a crowd-funding campaign at www.indiegogo.com/MafiaGuide.