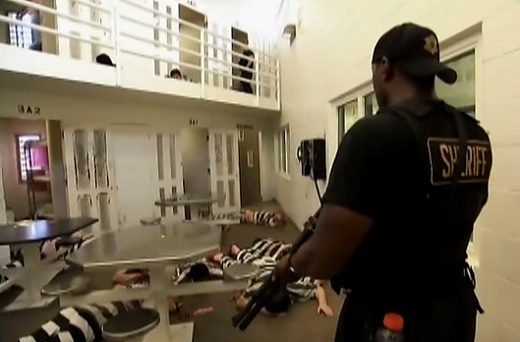 Violence and abuse of power behind prison walls remains a systemic problem. In a nine-count indictment unsealed Tuesday, two Mississippi correctional officers were charged with beating an inmate and a third was charged with helping to cover it up. The case highlights a common crime that rarely results in serious consequences for the offenders.

Violating the right to be free from cruel and unusual punishment, that is what 28-year-old Lawardrick Marsher and 47-year-old Robert Sturdivant, both officers at Mississippi State Penitentiary, in Parchman, Mississippi, stand accused of. Prosecutors allege they beat up a convicted prisoner using kicks, punches, and a throw to the ground.

Sturdivant was also charged with failing to intervene while Marsher was punching and beating the inmate. The indictment alleges that their actions involved the use of a dangerous weapon and resulted in bodily injury to the victim.

A third officer, 23-year-old Deonte Pate, was charged along with Marsher and Sturdivant for conspiring to cover up the beating.  The indictment alleges that all three officers submitted false reports and that all three lied to the FBI.

Stories of prison guards abusing inmates are not uncommon. Hollywood has made some of its best movies about just this subject. From the Shawshank Redemption and The Green Mile to the more recent, and very violent, Felon, starring Val Kilmer and Stephen Dorff, in which guards organize fights between inmates.

If you think Hollywood was being a little bit outlandish with that last story, you should know that over thirty inmates filed a federal lawsuit against prison guards at the Medium Security Institution in St. Louis, claiming that they were “baited” into fighting against one another.

“Individuals who were put in solitary confinement were not supposed to have contact with any other inmate but what was happening was the guards were actually taking inmates out of the cells, placing them in cells with other inmates, and forcing them to fight each other,” attorney Daniel Brown told CBS St. Louis.

Author and Gangsters Inc. contributor Seth Ferranti spent several decades locked up in the United States penitentiary system. He has heard plenty about fellow inmates receiving a beating at the hands of guards. “One of my homeboys got thrown in the hole in the 1995 crack riots,” he tells Gangsters Inc. “The hole at FCI Manchester was overflowing so he got sent up to USP Terre Haute in a diesel therapy move. He said that place was off the hook. He had to wear magazines constantly to protect his vitals in case of a stabbing and when the cops brought him in they beat the shit out of him just on general principle. They threw him down the stairs. Kicked him in the ribs and smashed his head onto the concrete wall. Then left him to heal up in the hole.”

In a 2004 commentary, Human Rights Watch wrote, “A federal judge in 1999 concluded that Texas prisons were pervaded by a ‘culture of sadistic and malicious violence.’ In 1995, a federal judge found a stunning pattern of staff assaults, abusive use of electronic stun devices guns, beatings, and brutality at Pelican Bay Prison in California, and concluded the violence ‘appears to be open, acknowledged, tolerated and sometimes expressly approved’ by high ranking corrections officials.”

The commentary continues that “in recent years, U.S. prison inmates have been beaten with fists and batons, stomped on, kicked, shot, stunned with electronic devices, doused with chemical sprays, choked, and slammed face first onto concrete floors by the officers whose job it is to guard them. Inmates have ended up with broken jaws, smashed ribs, perforated eardrums, missing teeth, burn scars—not to mention psychological scars and emotional pain. Some have died.”

Despite countless incidents named by inmates and guards alike, there are hardly any exact numbers regarding abuse of convicts by prison staff. The closest we get to any specific numbers pertain to sexual abuse.

According to a 2012 survey by the Bureau of Justice Statistics, a full 4 percent of America's prisoners and 3.2 percent of jail inmates reported being sexually abused in the previous twelve months. Over half of this group said the alleged incident involved a prison guard or other staff member.

But when it comes to violence no such numbers exist. There are numbers on inmates assaulting fellow inmates or prison staff, but none on staff assaulting inmates. Reasons for this vary. “Many don’t say anything about it because convicts don't tell on cops [or each other],” Ferranti says. “It's like the code in there.”

And even if they do decide to air their grievances, it is uncertain whether anything happens. “Prisoners can file an administrative remedy and levy their charges against a [guard] but it would be a long and involved process and in the short term – 2 to 3 years - that prisoner would be constantly harassed and retaliated against,” Ferranti explains. “He might get justice in the end if he persevered through the courts but in the short term his life would be hell.”

Still, if a convict would opt to go through that hell, it might not be enough. According to the corrections department’s 2013 report on grievances filed by inmates, “The perception among staff is that some of the harassment complaints are filed in an attempt to discredit misbehavior reports” against inmates, The New York Times reports.

Professor Sharon Dolovich is a leading expert on the law, policy and theory of prisons and punishment, and teaches courses on criminal law, the constitutional law of prisons, and other post-conviction topics. In her paper Cruelty, Prison Conditions, and the Eighth Amendment, she writes the following about the powerful position guards hold.

“If a police officer with a badge can wield […] much power against private citizens in their own homes, imagine the scope of correctional officers’ authority in the prison,” she writes. “Not only the badge but the very architecture of incarceration gives prison officials, in a practical sense, enormous power over the incarcerated. The wholesale removal of prisoners from their homes and communities; their containment in small locked cells; the power of prison officials to dictate  prisoners’ every move; prisoners’ utter dependence on state officials for the fulfillment of their most basic needs; the state’s monopoly on the legitimate use of force; the ability of state officials to use or threaten ever-increasing force to put down any sort of resistance; the consequent inevitable futility  of any such resistance on the part of prisoners: all these features of prison life render prisoners  deeply vulnerable to those officers whose actions, whether from malice, caprice, or simple indifference, transgress the legal bounds of their authority,” she finds.

Concluding, Dolovich writes, “A prisoner on the receiving end of illegal abuse could recite the relevant law chapter and verse and thus plainly show the illegality, but it would not avail him. Indeed, given the power dynamics that often reign in prisons, assertions of this kind may only provoke renegade officers to even greater aggression.”

When it comes to fighting the prison’s power system, inmates are in for a long and dangerous uphill struggle. One that could turn deadly at any point.