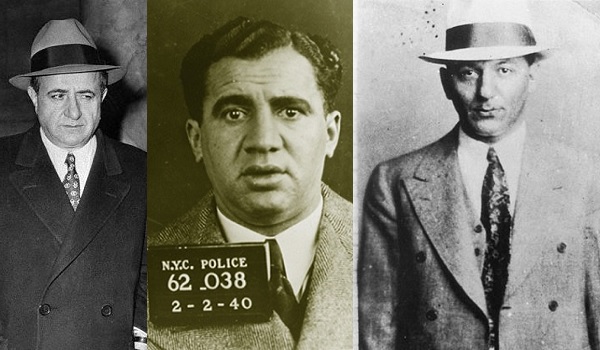 Murder Incorporated. Catchy name for a bunch of hired killers, isn’t it? So where did such a clever, sinister and aptly-dubbed moniker originate? While there will probably always be some conjecture and debate, the most widely-accepted version gives credit to a reporter from the New York World Telegram.

Harry Feeney, if he indeed did coin the phrase Murder Inc., was right on target with this one. To dub the group as such was fitting and considering just how sensationalized the newspapers were (is the news really that different today?) – memorable. The name stuck in the minds of law enforcement and the general public, remaining even today as how this branch of the mob is addressed.

And to be fair… the methods by which many of Murder Inc.’s members carried out death sentences was, quite frankly, very worthy of the media’s sensationalistic preference anyway. These particular gangsters were rarely recognized for quietly and quickly putting a bullet in a target’s head, although that was, of course, a measure sometimes taken.

Graduating from the use of hit-and-run gunfire, some of these guys regressed into barbarism. They took great joy in their duty, utilizing extreme brutality with ice picks, rope, meat cleavers, guns, and even fire axes. There has been no collective in organized crime history quite like the murder consortium my book Murder Inc.: Mysteries of the Mob’s Most Deadly Hit Squad addresses.

However, prior to Feeney’s catchphrase taking America by storm (and there is some debate over who really did coin the expression, but we’ll get to that shortly) the microcosm of organized crime these killers were part of was referred to as a “Combination,” “Cut-Rate Murder Syndicate” and “Murder-for-profit Syndicate.” Being that most of the killers hailed from the Brownsville and Ocean Hill areas of Brooklyn, “Brownsville Boys” and the “Brownsville/Ocean Hill Combination” were also terms used to distinguish them. The word “Combination” was apparently how the killers themselves referred to the group, according to one its own top-ranking members – Abe “Kid Twist” Reles. 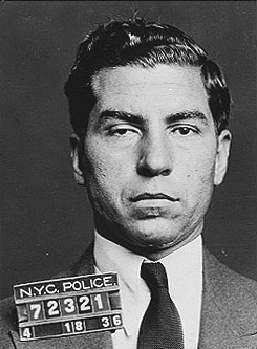 The Combination had been commonly employed by the press and law enforcement alike for other mob-related detachments during the entire 1930’s and beyond. A prime example of such… none other than the outrageously sensationalized 1936 trial of Charles “Lucky” Luciano (right) and eight other defendants. The charges were essentially based on the premise that Lucky and friends were operating nationwide prostitution rings, known as the “Combine” or Combination.” With the murder for hire division of Luciano’s Mob Empire crumbling just a few years after that trial, well, utilizing a more marketable and distinguishing name was in the best interest of press, police, politicians and the DA’s office. And so it was… Murder Inc. the moniker was born in early 1940.

And again, although selling newspapers was highly dependent on eye-popping, albeit often exaggerated headlines, when it came to this band of bloodthirsty brethren - the press was genuinely trying to reiterate the unconscionable extreme nature of this group.

These gangsters were unlike anything the underworld had ever encountered before, and unlike anything the underworld has ever produced since. Their collective exploits were the stuff of contemporary horror films, replete with inhuman acts of the vilest kind. There eventually came to be fewer instances of quick and quiet gunshots to a target’s head. To make the point very clear, many of the hits were carried out with frenzied bloodlust; enjoyment may even be an

appropriate description. Weapons of a barbaric and terrifying nature were preferred over any typically expected gangland go-to choice. Death, essentially for these men, was an art and meant to invoke psychological terror into anyone and everyone.

Long before anyone outside the mob knew the intricacies of the “Combination,” there were rumblings and outrages over the gangland wars in general– the injustice when known participants would arrogantly stroll out of virtually every police lineup. Unscathed, swaggering and above the law, such were some of these burgeoning young enforcers. An excellent example of the anger towards a lackadaisical legal system was made very clear in an op-ed piece penned nearly a decade before the world knew the true nature of the mob’s killing machine.

In his September 1931 commentary, “The News To-Day,” William Morris minced no words in his disgust for the manner in which gangsters were hauled in for atrocious crimes, and systematically released virtually every time. He used the example of six young men in particular.

“But there is another problem that cannot be treated as a form of social disease, but that must be faced by those who enforce our laws in order that citizens may live in peace. Here are six young men, the oldest twenty-seven years old, who already have 100 arrests chalked up against them, and who undoubtedly have sinned against the moral and legal codes many times one hundred times.” 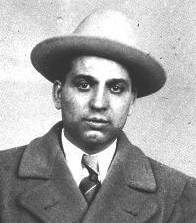 Though he could not have known at the time – Morris was so very precisely correct in forecasting further crimes of four named in the piece. Abe Reles, Harry Maione (right), Martin Goldstein and Harry Strauss would, a decade later, become the faces and poster boys of New York’s most deadly hit squad.

Morris was not the first, nor was he the last, person to openly condemn the boldness of mobsters and an especially lax legal system. Judges, prosecutors, reporters and radio personalities began voicing outrage. A law was even established, basically, to make arresting gaggles of gangsters in fell swoops all the easier. Still, it seemed nothing could stop the frequency of bodies appearing in alleys, in dumps, in cars, in pits, in lakes and even on busy street corners.

All the while, for almost an entire decade, nobody realized the underworld chaos they condemned was so vast, so complex and so intricately related.

And now back to mystery number one: Was it Harry Feeney who cleverly created the iconic phrase Murder Inc.?

The first arrests that led investigators to begin unravelling the complex organization had occurred in early February 1940. The use of Murder Inc. became commonplace in March. Feeney had covered the story early on and was often chatting it up with the King’s County prosecutor’s team. Some could argue Feeney was truly immersed from day one, so it would be reasonable to imagine him whipping up such an amazing descriptor – one that virtually every other news media source and investigative body of the law adopted as the term for this bizarre mob extension.

In July of 1975, syndicated entertainment writer Jack O’Brian addressed Murder Inc.’s origins in his column “On Broadway.” He was harkening back to the good old days of the World-Telegram and how Harry Feeney was “The finest police reporter in N.Y. history.”

“Asa coined the ‘Murder Inc.’ title. Two days later someone told Asa to register it as a Hollywood film, but Murder Inc. had been snapped up about the moment Asa’s story hit the newsstands.”

O’Brian further explained in the column how registration of titles in Hollywood was based on the first claimant, and thus Bordages’ creation was unavailable by the time he attempted the process.

O’Brian also stated that Bordages did get his story told in film, but it was titled “Brooklyn U.S.A.” and starred Humphrey Bogart. However, Bogart was never in a movie called “Brooklyn U.S.A.” However, a film titled “The Enforcer” released in 1951 and featured Bogart as a crusading District Attorney. Going back before O’Brian’s recollection, a column written in 1967 by another former World-Telegram reporter – Mel Heimer – stated Feeney “invented the name” and Asa Bordages wrote a play based on all the Murder Inc. characters, which had run on Broadway and was titled “Brooklyn U.S.A.”

So then, whatever happened to the original phrase? The term “Murder Inc.” became the title of a 1951 book by Burton Turkus and Sid Feder. Then in 1960, a film version based on that book, also titled “Murder Inc.,” released with actor Peter Falk in the starring role. The phrase remained popular for use in everything from automobile ads to comic books to the name of a record label.

Iconic photographer Arthur “Weegee” Fellig, known for capturing stark and provocative images throughout New York City from 1935 to 1946, dubbed himself “The Official Photographer of Murder Inc.” His common nickname, Weegee, was spawned from an uncanny ability to arrive at newsworthy scenes often before police did – as though he used a Ouija Board.

Many of his pictures, which he sold regularly to newspapers, depicted the arrests, deaths and aftermath of New York City’s gangland wars.

This was an excerpt from the book Murder Inc.: Mysteries of the Mob's Most Deadly Hit Squad by author Christian Cipollini. You can find more of Cipollini's books and writings at his website www.ganglandlegends.com and follow him on social media such as Twitter, Facebook, and Instagram.