In the early 1930s banks in the United States were terrorized by a bunch of high profile armed robbers who roamed the mid-west. One of these notorious men was Tennessee, Mississippi-born “Machine Gun” Kelly. Starting out as a bootlegger, he switched careers after a stint in prison and became a fulltime bank robber feared throughout the country.

He did so with help of his loving wife Kathryn who did much more than just stand by her man. In Barbara Casey’s soon-to-be-released book Kathryn Kelly: The Moll Behind “Machine Gun” Kelly readers get the full story behind Kathryn and her husband. The following is an exclusive excerpt of that book.

After  getting  married,  George  and  Kathryn Kelly returned  to  Fort  Worth  and  quietly  set  up house-keeping on Mulkey Street  in the house that  Kathryn’s  late  husband,  Charlie  Thorne,  built.

Neighbors  later  recalled  seeing  the  Kellys  drive around in their big sixteen-cylinder Cadillac and how well dressed the couple were. George was to lament years  later  that  this  was  the  turning  point  in  his career,  and  that  he  should  have  stayed  in  Tulsa bootlegging.

Also in September  of that year,  George  helped rob a bank in Ottumwa, Iowa, with a group of bandits  that included  Holden,  Keating,  Bailey,  Miller,  Fred  Barker and  Larry  DeVol,  an  associate  of  the  Barkers  and Alvin  “Creepy”  Karpis,  given  the  nickname  “Creepy” because  of  his  sinister  smile  and  called  “Ray”  by  his gang members.

In  September  1932,  Kelly,  Albert  Bates,  and  Eddie Bentz,  a  seasoned  bank  robber,  traveled  to  Colfax, Washington,  near  the  eastern  edge  of  the  state, where, on September 21, they robbed the First Trust & Savings Bank of Colfax of seventy-seven thousand dollars. Within weeks, police raided the Kellys' home in Fort Worth, but the couple had already fled. Bentz was  arrested  a  short  time  later  in  a  Dallas  post office.  He  admitted  to  knowing  Kelly  and  Bates,  and acknowledged they  had  a  hideout  on  a  ranch somewhere  in  Texas,  but  denied  any  involvement  in the  Colfax  robbery.  When  Bentz  was  able  to  make bail, he fled the state.

Bruce  Barnes  writes  that  his  father  felt  superior  to the  bank  robbers  he  befriended  in  Leavenworth.  “It wasn’t just the money that appealed to him. It was the  image  of  himself  going  into  a  bank  holding  a gun, knowing that he had complete power over those he was robbing.” Barnes also writes that Kathryn not only  helped  in  the  planning  of  these  robberies,  but that  she  dressed  like  a  man  and  participated  as  an armed getaway driver during some of them. 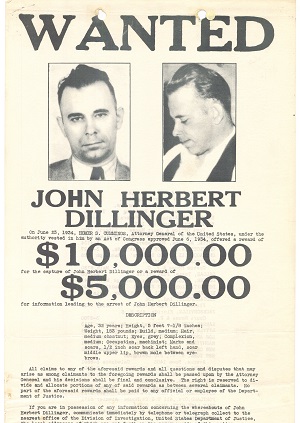 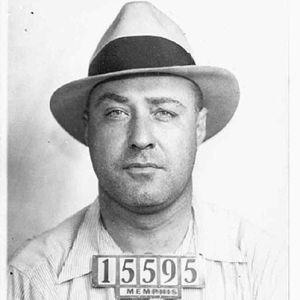 There  is  little  doubt  that  these  stories  have  been embellished over the years. For one thing, Kelly was never  keen  on  fire  arms.  For  another,  it  has  been pointed  out  that  pecan  trees  are  dominant  in  the area  rather  than  walnut  trees.  There  is  also  some question  as  to  whether  it  was  Kathryn  who  actually came  up  with  the  name  “Machine  Gun  Kelly.”  The FBI had its own ubiquitous public relations arm which cleverly  played  up  the  frightening  nickname  while seeking  Kelly;  thereby  painting  Hoover  and  his agents  as  heroic  and  courageous  in  their  pursuit  of this  extremely  dangerous,  heavily  armed  public enemy.  The  FBI’s  wanted  poster  warned  that  Kelly was  an  “expert  machine  gunner,”  while  at  the  same time some of the bureau’s press releases labeled him “a desperate character.”

Other  stories  spread  around  the  Southwest  of  the fearless robber calling himself “Machine Gun Kelly,” a deadly  master  of  the  Tommy  gun,  who  “signed”  his holdups  by  blasting  his  name  across  billboards  and bank  walls.  There  was  one  incident  where,  following a bank robbery in Texas, Kelly used his machine gun to  shoot  his  last  name  on  a  signpost  as  he  and Kathryn  raced out of town, but this one act wouldn’t justify  newspapers  of  the  day  proclaiming  Kelly  “the most dangerous man in America.”  More than likely it was  just  bad  timing  for  Kelly.   The  fact  is,  Kelly never  killed  anyone—or,  as  far  as  anyone  knows, even fired his weapon in anger.

Kelly’s  list  of  underworld  associates  continued  to grow. He became acquainted with Chicago mobsters and  “Kid  Cann,”  operated  by  Isadore  Blumenfeld,  a Jewish-American  organized  crime  figure  based  in Minneapolis,  Minnesota.  Kelly’s  accomplices  on various  crimes  included  Eddie  Bentz,  who  would boast to the FBI  of having robbed between  “fifty  and a hundred banks”  in his life; Edward Doll, alias Eddie “Blackie”  LaRue  or  “Burlington  Eddie,”  known  for bootlegging,  bank  robbery,  and  kidnapping,  and alleged  to  be  a  “spot  killer”  for  Chicago  mobsters; and  Albert  L.  Bates,  whose  aliases  include  George Bates, George L. Davis, George Harris and J.B. King, wanted  for  bank  robberies  across  the  country  and suspected  of  murdering  his  accomplices,  J.E.  “Mike” Conway and Frank “Frisco Whitey” Carroll.

Paroled  a  year  and  a  half  later,  his  next  sentence was  a  six-month  stretch  for  petty  theft  in  Salt  Lake City.  In  August  1921,  Bates  received another sentence for burglary in the Utah State Penitentiary.

According  to  Allan  May,  author  and  organized  crime historian,  Kelly’s  first  kidnapping  occurred  in  1930 with  a  former  Cicero,  Illinois  police  officer  named Bernard  “Big  Phil”  Phillips.  “Tall,  husky,  and  slowspoken,  Phillips  had  been  fired  as  a  traffic cop  for extortion.  During  the  kidnapping,  one  of  the  victims taken  by  Phillips  was  killed  when  Phillips’  gun accidentally discharged.”

Later,  Phillips  asked  Kelly  to  join  him  in  another kidnapping,  but  Kelly  declined,  concluding  that  the proposed  victim  did  not  have  enough  money  to  pay the  ransom.  Phillips  went  ahead  with  the  abduction but  soon  discovered  that  Kelly’s  assessment  had been  correct.  Phillips  then  released  the  victim  with the  ridiculous  order  to  bring  his  own  ransom  to  a meeting.   In  attempting  to  collect  the  ransom,  he borrowed  Kelly’s  Cadillac,  thus  making  Kelly  the suspect  for  Philips’  crime.  Because  he  was  being hunted, Kelly had to flee to Chicago with his Cadillac coupe loaded into the back end of a truck. Kelly’s  second  kidnapping  attempt,  along  with  his partner,  bootlegger  and  car  thief  Eddie  Doll,  took place  on  January  27,  1932.  Howard  Woolverton,  a South  Bend,  Indiana,  banker,  was  returning  home with his wife when a gunman jumped on the running board  of  their  car  and  forced  his  way  into  the automobile. After ordering Woolverton to drive out of town, they stopped two miles outside the city where Woolverton  was  forced  into  another  car  that  had been  following  them.   Mrs.  Woolverton  was  then given  a  ransom  note  demanding  fifty  thousand dollars. After driving Woolverton around the northern part  of  Indiana  for  two  days,  the  victim  was  finally able  to  convince  Kelly  and  Doll  that  he  didn’t  have the money  to pay the ransom. He was  released just outside  Michigan  City,  Indiana,  on  his  promise  to raise  the  money.  Calls  and  letters  to  his  home demanding  the  money  were  ignored,  however,  and eventually  his  kidnappers  stopped  trying  to  contact him.

Not discouraged, Kathryn and George made plans for still  another  kidnapping,  this  one  involving  Guy Waggoner,  the  son  of  a  Fort  Worth  oil  magnate.

Kathryn had a party at their Mulkey Street home and invited  Fort  Worth  police  detectives  K.W.  Swinney and  Ed  Weatherford.  Believing  they  were  corrupt, Kathryn  talked  to  them  about  taking  part  in  the kidnapping.  Swinney  and  Weatherford,  however, knowing of the Kellys’ criminal history, were trying to cultivate  Kathryn  into  becoming  an  informant.  They declined, telling her it was too risky.  Before  the  detectives  left,  she  asked  them  for  a favor:  If  Kelly  or  his  partner  Bates  were  ever arrested  in  another  state,  could  the  detectives  be counted  on  to  contact  that  authority  and  claim  they were  wanted  in  Texas  for  bank  robbery?   “And  you boys come and claim them,”  meaning the detectives would  then  allow  them  to  escape  from  custody.  “Is that  a  go?”  she  asked.  Swinney  and  Weatherford assured  her  they  would.  The  detectives  then contacted the FBI who placed the oilman’s son under constant  police  surveillance.  With  so  many  police around the young man, the Kellys dropped their plan to kidnap him.

Kelly,  like  a  number  of  other  criminals  during  that era  of  Prohibition,  saw  kidnapping  as  a  relatively safe, easy way  to  get a  lot of money fast. Basically, it  involved  identifying  a  wealthy  victim,  finding  a safe,  hidden  place  to  keep  the  victim,  and  working out  a  plan  to  collect  the  ransom.  A  kidnapping  was less  dangerous  than  robbing  a  bank,  Kathryn  and George  reasoned,  and  they  could  collect  whatever they  demanded.  Whereas,  in  a  bank  robbery,  the take was uncertain, especially since they were in the midst  of  the  Great Depression  when  even  the  banks occasionally  ran  short  of  cash.  While  the  Kellys considered their next move, several unrelated events occurred  which  the  FBI  and  law  enforcement agencies in the Midwest would incorrectly tie into the Kelly legend.

First, Kelly's former Leavenworth  associate and onetime  bank-robbing  partner,  Harvey  Bailey,  had  been arrested and incarcerated in the state penitentiary in Lansing,  Kansas.  On  May  30,  1933,  Bailey,  Wilbur Underhill  and  nine  others,  using  guns  allegedly smuggled  into  the  prison  by  Frank  Nash,  kidnapped the  warden  and  two  prison  guards  in  a  daring escape. The hostages were later released unharmed.

After  regrouping  in  the  Cookson  Hills  of  eastern Oklahoma,  Bailey  and  Underhill  would  lead  a  gang which pulled off several bank robberies in that state.

The  second  event  was  the  June  17,  1933,  Kansas City  Massacre—also  referred  to  as  the  Union  Station Massacre.  Verne  Miller,  a  freelance  Prohibition gunman, bootlegger, bank robber, and former sheriff in  Huron,  South  Dakota,  and  two  unidentified accomplices  attempted to free Nash from a group of federal  agents  and  law  enforcement  officers.  Nash, who  had  been  arrested  by  federal  agents  in  Hot Springs,  Arkansas,  the  day  before,  was  being transferred back to Leavenworth. During this ill-fated rescue  attempt  five  people—four  law  officers  and Nash—were  killed.  Years  later  it  would  be  revealed that  Nash  and  at  least  two  of  the  law  officers  died from friendly fire.

In  that  same  month,  Tulsa’s  Barker-Karpis  gang, comprised of Ma  “Arrie”  Barker  and her sons and the gang of Alvin Karpis, abducted beer baron William A. Hamm  at  St.  Paul.   They  demanded  a  one  hundred thousand  dollar  ransom.  Hamm  was  taken  to Wisconsin, where he was forced to sign four ransom notes.  Then  he  was  moved  to  a  hideout  in Bensenville,  Illinois,  and  held  prisoner  until  the kidnappers  had  been  paid.  Once  the  money  was handed  over,  Hamm  was  released  unharmed  near Wyoming,  Minnesota.  Albert  Bates  would  later  claim that  Ma  Barker  couldn’t  even  organize  breakfast, much  less  “a  job.”  However,  history  would  prove otherwise.

While the search had gone on for Hamm’s abductors, other  prominent  citizens  fell  victim  to  kidnapping:

An  Atlanta  banker  was  taken  in  an  unsuccessful effort  to  get  forty  thousand  dollars  in  ransom;  John J.  O’Connell,  Jr.,  the  twenty-four-year-old  son  and nephew  of  several  New  York  politicians,  was kidnapped  and  two  hundred  fifty  thousand  dollars demanded for his return of which only forty thousand dollars  was  paid;  August  Luer,  an  Alton,  Illinois banker,  was  abducted  and  then  released  without receiving  the  demanded  one  hundred  thousand dollars. 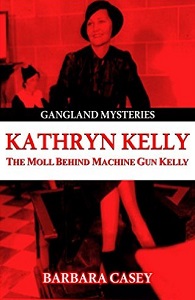 On  learning  of  these  kidnappings  and  some  of  the successful payoffs,  despite their  own lackluster  track record  in  kidnapping,  the  Kellys  and  Bates  soon decided  on  yet  another  attempt.  This  one  was destined to firmly set George Ramsey Kelly's  name—aka  George  Barnes,  George  Kelly,  J.J.  Rosenburg, and  George  Celino  Barnes—into  the  annals  of  crime history.

This was an excerpt of Barbara Casey’s soon-to-be-released book Kathryn Kelly: The Moll Behind “Machine Gun” Kelly. You can pre-order the book at amazon.com or at a store near you. You can follow Barbara Casey at her website and blog: www.barbaracaseyagency.com.