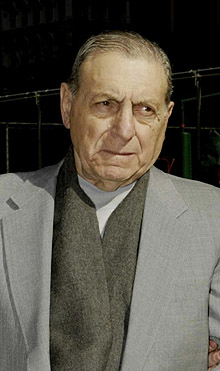 Dominick "Quiet Dom" Cirillo was born on the 4th of July, 1929. He started out as a boxer but eventually turned to a life of crime. Early on in his criminal career, in 1952, Cirillo was convicted on a narcotics charge. Cirillo was a good friend of Genovese crime family boss Vincent Gigante and when Gigante went to prison in July of 1997 he was annointed Acting Boss. Cirillo conducted his Mafia business in the shadows. He favored walk talks over telephones. On May 8, 1998 Cirillo had a massive heart attack.

On May 9, 2004 Nicholas Cirillo (picture on the left), Dominick Cirillo’s son, left his home and told his wife he was going to Home Depot to buy compound. He did not return. On May 10 Nicholas’ wife Gina filed a missing persons report on her husband. On May 23 the New York Daily News reported the rumors regarding Nicholas’ disappearance; he was murdered by Bonanno mobsters. According to their mob source two weeks before his disappearance Nicholas went to a real estate office in Pelham Bay and got into a fight with Vincent Basciano jr, son of Vinny Gorgeous Basciano at that time Acting Boss of the Bonanno crime family, and Bonanno capo Dominick Cicale. "He wanted to start pushing around made guys, and now he's gone," said one organized crime investigator. "We don't think he is going to resurface." It was believed that Dominick Cirillo would avenge his son but the New York Daily News reported that he was unhappy with his son for building a rap sheet of minor drug offenses. Nicholas was believed not to be a made guy or even mobster. One investigator in the case is quoted: "His own father hates him,".

On December 1, 2004 Randolph Pizzolo (43) was found shot to death. It was alleged by authorities that he was murdered by the Bonannos because he bragged about his role in killing Nicholas Cirillo.

On April 5, 2005 Dominick Cirillo was arrested and charged with racketeering, murder conspiracy, extortion and loan-sharking. Arrested at the same time were: Lawrence Dentico, John Barbato and Anthony Antico. All men pleaded not guilty. According to federal prosecutors Cirillo, Dentico, Barbato and Antico are leading figures in the Genovese Crime Family. Prosecutors furthermore said that the indictments were the result of secretely recorded conversations by an informer inside the Genovese crime family.

When federal agents arrived at Cirillo’s home they took him by surprise. Agents say they found a piece of paper on the kitchen table with the names of five men who were proposed for membership of the Genovese crime family. It also became known that when mobsters discussed Cirillo they wouldn’t say his name. Instead they would put a finger to the lips, which indicated they were talking about "Quiet Dom" Cirillo.

A week after being arrested Cirillo asked for a court-appointed lawyer. Cirillo claimed he was too poor to afford a lawyer and asked for the court to appoint one. Cirillo’s registered income consists of $600 a month in social security. It was furthermore said that he gave his modest house on Research Ave. in the Bronx to his now-missing son, Nicholas, five years ago. When Cirillo was arrested he was living with his daughter Anne Marie in her summer home in Long Beach, L.I.

On March 3, 2006 Dominick Cirillo was sentenced to 46 months in prison and was ordered to pay $75,000 in restitution. "You continued to commit criminal acts as an elderly, infirm individual," Federal Judge Sandra Townes told Cirillo, who remained seated as he heard his sentence, complaining of a cough and sore throat.