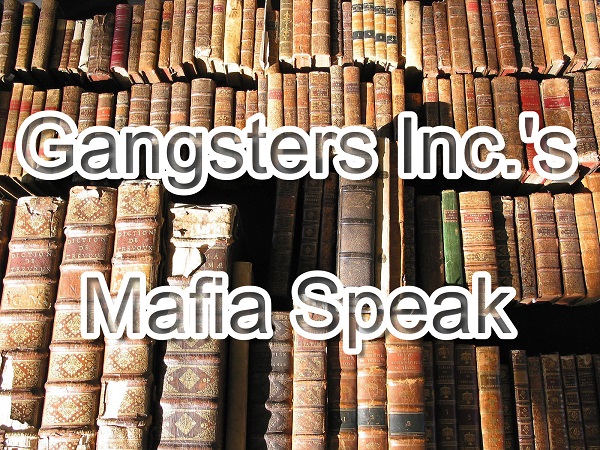 Learn how to talk the talk of a real American mobster or learn to understand the difficult code and words Italian and Sicilian Mafiosi use as they go about their business, perhaps you can even crack the communication used by the Russian Mafia or Mexican drug lords. Of course, the underworld always changes and evolves, as does its language. That's why we will be keeping this list up to date with the latest gangster lingo.

Administration – The leadership of a Mob Family. Usually comprised of the boss, underboss, and consigliere.

Associate -  Someone who is affiliated with the Mafia, but is not an official member. In the Mafia members must have an Italian father, but associates can be any ethnicity.

Avtoritet - An authority, used in Russia to describe the latest generation of crime bosses.

Babania - Drugs. Also read: Pick your poison: What drugs are there and what’s their story? Gangsters Inc. made a list

Beef – A dispute between mobsters. These are usually discussed during a sit down between the arguing parties overseen by a higher up.

Black Book – This is the nickname given to the casino exclusion lists of Las Vegas and New Jersey.

Blatnoy - Russian for criminal, member of a gang.

Book -  A gambling operation focused on sporting events. The racket is run by a "bookmaker."

Boss – The leader of a Mafia Family. His word is final.

Boss of Bosses - Deemed the most powerful Mafia boss. In the American Mafia there have been two boss of bosses: Salvatore Maranzano and Charles “Lucky” Luciano. In Italy, there were Salvatore "Toto" Riina and Bernardo Provenzano. Also known as Capo di tutti capi.

Button -  A soldier in a Mafia Family.

Call in – When a Mafia boss or capo orders one of his underlings to meet him.

Capable – Able and willing to murder for the Mafia

Capo dei capi – Italian for the term Boss of Bosses. Deemed the most powerful Mafia boss. In the American Mafia there have been two boss of bosses: Salvatore Maranzano and Charles “Lucky” Luciano. In Italy, there were Salvatore "Toto" Riina and Bernardo Provenzano. Also known as Capo di tutti capi.

Capo – In Italy this continues to be used as a title for a boss, but in the U.S. it now means a captain, also known as skipper. It comes from capodecina or caporegime.

Citizen – Someone not involved in organized crime or law enforcement

Commission – The overseeing committee of Mafia leaders who rule over mob activities pertaining all Families. In the U.S. this is known as The Commission, in Italy as the Cupola.

Connected - A description of a Mafia "associate."

Consigliere -  Third most powerful position in a Mafia Family. A Consigliere is a counselor and advises the administration and other family members about Mafia code, rules, disputes, and more.

Contract - An old-time term referring to an order to murder an individual.

Cosa Nostra – Translated it means “our thing” and it refers to the Mafia from a member’s point of view. In the United States, authorities added the word “La,” creating LCN, La Cosa Nostra.

Cosca - Translated "gang," this term is typically used to refer to a Mafia organization in Sicily. Equivalent to "borgata."

Crew -  A body of soldiers assigned to a capo. The crew typically meets on a regular basis at the capo's headquarters.

Dragon head - Term used to describe a boss of a Triad or Chinese Mafia group.

Earner -  An individual who earns income for the Mafia.

Family -  The basic unit of the Mafia society. See "Borgata."

Farm out – Pass on a murder contract to another family.

Fix -  From the line “The fix is/was in,” meaning someone was bribed to ensure the wanted outcome (sports player, cop) or to gain access to a place to rob.

Flip -  To become an informant, government witness, to break the code of silence known as omerta, and cooperate with law enforcement.

Friend of ours -  An introduction in which one Mafia member informs another that a new acquaintance is also a member. It is a means of vouching for the underworld credentials of another person. As opposed to "friend of mine," which, in introduction, means simply what it says.

Fuggedaboutit – Forget about it – Can mean praise or criticism, yes or no.

Godfather -  Title typically used out of respect and affection. In a Mafia context (particularly in the movies), it refers to the boss. However, no boss in the modern era has been addressed by that title.

Goomba -  Term of affection and respect.

Green lit - When a murder contract is placed on someone's head

Hit the mattresses – Going to war with another organization. That requires massive manpower resulting in hit teams sharing a room while on stand-by, sleeping on different mattresses to get some rest while they wait for weeks or months.

Joint – Prison. Could also be another location like a bar or restaurant.

Jumped in - Initiation rite in which prospective gang members are beat up by other members of a gang for a certain period of time after which they are fully accepted as a member.

Junk - Narcotics. Those who traffic drugs are in the “junk business” or “junk.”

Lamming it – Going on the run.

Lupara Bianca – Translates as “White Death” and refers to murder someone without their body ever being found.

Made - Formally inducted into the Mafia through a secret ceremony.

Make his bones – To carry out a murder for the Mafia

Mark – Someone targeted as a victim of criminal acts.

Men of honor – Made men, members of the Mafia.

Mustache Pete – Nickname used to describe an older generation of mobsters who held on to old country traditions. Used primarily during Prohibition.

Muscle in - Invade a rival's racket or territory through force.

Narcos - Short for narcotrafficantes, which is Spanish for drug traffickers.

No-show job – A ghost job, a mobster is on the payroll and collects his check without showing up for work. Usually arranged through union corruption.

On the carpet – When a mobster is heavily criticized by his Mafia superiors.

On the lam - Moving secretly. Indicted mobsters, in an effort to avoid arrest, might go "on the lam," changing their address, moving secretly from place to place.

On the pad / On the take - Designation for a law enforcement officer who is paid by the underworld to ignore certain criminal activity.

Packing - Armed with a concealed handgun.

Pentito – Italian word for Mafioso who is cooperating with justice and law enforcement.

Piece -  Either a gun or a percentage of profit from business ventures.

Piece of work - A murder contract.

Plata o plomo - Spanish for "silver or lead" meaning a bribe or a bullet.

Points - Interest paid on a shylock loan. Also known as “vig” or “shy.”

Protection (known in Italy as “pizzo”) - An extortion racket in which business owners are assessed a tax by a local Mafia group in exchange for assurances that no harm will come to them. Also the money paid by organized criminal groups in bribes to law enforcement.

Quebrar - Spanish slang for killing someone

Rub out - To kill, a murder

Shake down - Using intimidation or extortion to undermine people or businesses.

Sapo - Spanish slang for an informant.

Shelved – From the line “Put on the shelf,” it means that a mafia member is no longer active and loses his power within the organization.

Shylock - A money lender who loans money at usurious interest rates. If you fail to pay back what is owed for any particular period you are disciplined with violence.

Skhodka - Russian word for meeting or sit down between gangsters.

Sing – To inform to police

Sit-down - A meeting, usually to resolve a dispute.

Skim/skimming -  Shaving money off the top of the profits from a mob-controlled business without the government knowing. Happened in Las Vegas when the Mafia skimmed money from their casinos.

Skipper – Other word for capo or captain

Standup Guy - An individual who observes the principles of omerta even when it brings harm to himself.

Straighten out - Resolve a dispute. Formally induct a Mafia member.

This thing of ours – La Cosa Nostra, the Mafia organization.

Torpedo - Nickname Russian gangsters use for a hitman.

Underboss - Second in command of a Mafia family.

Vendetta - A pledge of personal vengeance on an enemy.

Vig also known as “vigorish” - Percentage of each bet that is retained as income for a bookmaker. The usurious interest charged by a shylock.

Vor v Zakone - A Thief-in-Law, meaning an official member of the Russian Mafia.

Vorovskoy mir - Thieves' world, the criminal culture of the Thieves in Law.

Walk and talk – To evade police listening in, mobsters will go on walk and talks, discussing criminal operations while walking around the neighborhood.

Wiseguy - A "made" member of a Mafia organization.