Along with the New York mobster eleven others were implicated in the Cleveland crime ring. The arrests brought an end to an 18-month sting named “Operation Goodfella.” During several morning raids police seized two weapons, $45,000 in cash, heavy machinery, and video equipment.

As the name suggests, Agnello was the main target of the operation. As a made member of New York’s Gambino crime family and ex-husband of Victoria Gotti - daughter of mob boss John Gotti Senior - “goodfella” Agnello has had a bull’s eye on his back throughout his criminal career. A change in scenery didn’t fix that.

Agents arrested Agnello early Wednesday morning at his scrapyard Eagle Used Auto Parts on East 116th Street near Harvard Avenue in Cleveland, Ohio. News outlet Cleveland.com reports that after Agnello “was released from federal prison in 2008, he married a woman from the Cleveland area and moved to a secluded and wealthy Cuyahoga County neighborhood near Bentleyville.” Before coming to Cleveland, Agnello (left) had spent seven years in prison for crimes he committed in New York. During those days he was still married to Victoria Gotti and was alleged to be a big earner part of - then brother-in-law - John Gotti Junior’s crew.

Despite marrying into the Gotti clan, Agnello did not earn Gotti Senior’s respect. During recorded prison visits Gotti can be seen and heard lamenting and ridiculing his son-in-law. “He's gonna get indicted any day, this moron. He's built himself a gallows. He's bought the noose,” Gotti said when Victoria and his brother Pete came to visit him in prison.

Sitting behind prison glass the Dapper Don showed he still had his street smarts about him after authorities proved him right when they did indeed arrest his “moron” son-in-law and hit him with racketeering and extortion charges. Even back then, in 2000, Agnello’s crimes were directly linked to a successful scrap metal business. A year later, he pleaded guilty and agreed to pay around $11 million in fines, restitution, and back taxes.

He even poked fun at Agnello’s bipolar disorder known as manic depression, asking Victoria, “So what's the story with Carmine?”

“What do you mean, what's the story with him?” she replied.

In 2002 Carmine and Victoria filed for divorce.

Though John Gotti Sr. had no respect or love for Agnello, Victoria remains supportive of her ex-husband during his latest trouble with the law, telling the New York Daily News, “All I will say is he’s the father of my children, and we will be here to help him if needed. This deeply saddens me. At the same time, I do not believe it. He was too successful to be a part of what authorities are claiming.” 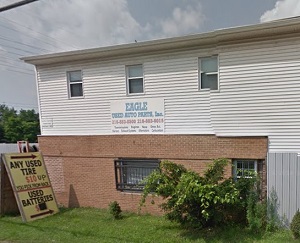 Police, however, seem quite sure of their case. They allege that Agnello was paying neighborhood teenagers to steal cars and bring them back to his business (right). There, Agnello would crush the cars and, allegedly, fill them with dirt to illegally weigh them down. He would then take the cars to a scrap metal processing facility, where authorities claim he bribed employees to ignore the sand-filled vehicles.

Between 2014 and his arrest Agnello made about $3 million from the illegal racket, police say. Of course, they only started counting the moment their sting operation began. Agnello could’ve made millions more.

Whether or not Agnello sent a percentage of his ill-gotten gains back “home” to New York remains unknown. Police in Cleveland have yet to announce any proof of such a link.