"I know my father loved me, but I got to question how much, to put me with all these wolves. This is the world you put your kid in? So much treachery. ... My father couldn't have loved me, to push me into this life." – John “Junior” Gotti

John “Junior” Gotti was born on February 14, 1964. His father, John Gotti Sr would become the most famous mob boss since Al Capone. It has been said many times, John Gotti Sr had charisma. He walked the streets in his expensive suits, and had an air of being untouchable surrounding him. After winning several court cases against him, he got the nickname “The Teflon Don.” John Gotti Sr was at the top of the world, and on the cover of TIME magazine. On top of the Gambino Crime Family after orchestrating the murder of boss Paul Castellano. The media attention would be his downfall though. The FBI was obsessed with putting him behind bars. In April 1992 they succeeded, John Gotti Sr was convicted and sentenced to life in prison. Gotti Sr put his 28 year old son in charge of the crime family.

Junior Gotti became a made guy, a Mafia member, on Christmas Eve in 1988. Two years later he was made a captain, and two more years later he was Acting Boss of the Gambino Crime Family. A meteoric rise if there ever was one. With the rise came the money. Junior bought a six-bedroom Colonial mansion on three acres of rolling hills in Mill Neck, an exclusive community on the North Shore of Long Island.

In January of 1998 Junior was arrested and charged with extorting the owners and employees of the Scores nightclub; armed robbery of a drug dealer; telephone calling card fraud; loansharking and gambling. In April 1999 he pleaded guilty in a deal carrying a maximum of seven years and three months in prison, $1.5 million in fines, forfeitures, restitution and court costs to charges that include bribery, labor racketeering, gambling, loansharking, tax evasion and lying on a mortgage application. In October 1999 he began serving his sentence.

Just a few weeks before being released from prison Junior was indicted again. This time he was charged with racketeering, extortion, securities fraud and loansharking. The biggest charge was the kidnapping and shooting of radio host Curtis Sliwa. Sliwa had been badmouthing Gotti Sr on his radio show. Junior allegedly ordered his men to “teach Sliwa a lesson” for disresprecting his father. The government’s star witness was Gambino capo Michael DiLeonardo, who had been made during the same ceremony as Junior, and was a good friend of him as well.

Junior Gotti went to trial saying he had quit the mob in 1999. To bolster his claims Gotti’s attorney Jeffrey Lichtman had 100 hours of recordings of Gotti's talks with close friends inside the bleak visiting room of a prison in upstate Ray Brook. The FBI had begun taping Junior’s prison conversations on March 13, 2003. The tapes give interesting insights in Junior’s views on mob life during and after his father’s reign. 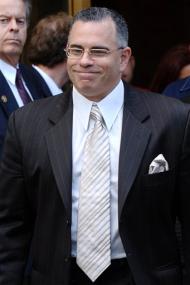 "My father on the street made you want to be a part of it, because he was that kind of guy." "You had to be part of it. You wanted to feel as close as possible to him. The only way was by being that. You wanted to be in it. When he left, John, the picture changed." "I finally realized that when my father was here, it was a real thing. It meant something. He really, really in his heart, loved and believed it, do you understand?" "I wanted to believe and love like him, but then I - once he went to jail and I seen how some people work - believe me, it was like a thing I wanted to get away from. I wanted to be anywhere else but there. I wanted to raise my children. I wanted to coach football for my kid. I wanted to get away from them, you understand me?" "Now I'm here. Here. Now he's dead. I really realize that it's not real. What he loved and what he believed in doesn't exist. It may have existed at one time, and it certainly existed in his mind, and probably in the fellas' minds and some other people's. But it doesn't exist anymore.” "Any honor and dignity, died with my father."

In September 2005 Junior Gotti was acquitted of securities fraud, the jury was hung 11-1 for conviction on racketeering charges, which included the kidnapping and assault of Sliwa. His re-trial on the remaining charges also ended in a mistrial. At Junior Gotti’s third trial, his new lawyer Charles Carnesi told the jury: “They don’t have evidence after 1999.” “They know he’s out. They want to recycle this evidence.” It worked again, his third trial ended in a mistrial again! Shortly thereafter the government dropped all charges against Gotti.

"In the 1990s, I lived an opulent and extraordinary lifestyle. I have very simple needs now." "I'll take my family and I'll go. It's enough now. They got to let go. Let us go, he's [John Gotti Sr] dead." "I want to start from scratch, w

herever my wife would be happy. I'm different than my father. My children are my life. You can convert me. My father you could not."

"Just when I thought I was out, they pull me back in." This could be one of the things Junior Gotti was thinking on the morning of August 5, 2008 when he was arrested by federal agents at his Oyster Bay, Long Island home and charged him with racketeering, murder and cocaine trafficking. The three murders he is charged with are that of Gambino family soldier Louis DiBono in 1990, the 1988 murder of George Grosso, and the 1991 slaying of Bruce Gotterup. All murders occurred under Junior's father John Gotti's watch. Junior Gotti claims he is being framed. If he is found guilty he will face life in prison.