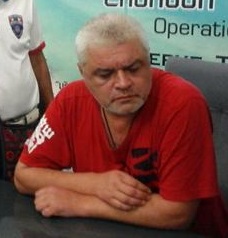 Vladislav Yudichev (photo above) thought he was safe from the long reach of law enforcement when he settled in the coastal city of Pattaya in Thailand, but he underestimated Interpol, the organization that was looking for the gangster for his alleged acts of fraud and corruption.

Last week, the Chonburi Immigration Office deported 44-year-old Yudichev after the Russian embassy in Bangkok informed the Jomtien Beach immigration office that it had revoked the passport of the wanted fugitive and asked for their help in locating and repatriating him.

Immigration police contacted Yudichev and lured him to their office by telling the mobster that his visa had changed and that he needed to sign some documents. Upon arrival he was placed in handcuffs and arrested.

He now faces fraud and corruption charges back in his home country of Russia. Yudichev denies having committed any crimes, but did say he was in debt about a million baht and recently sold property in Russia for sixty times that amount. Flush with cash, he doesn’t understand what the charges are related to.

Maybe authorities in Russia can explain it to him.